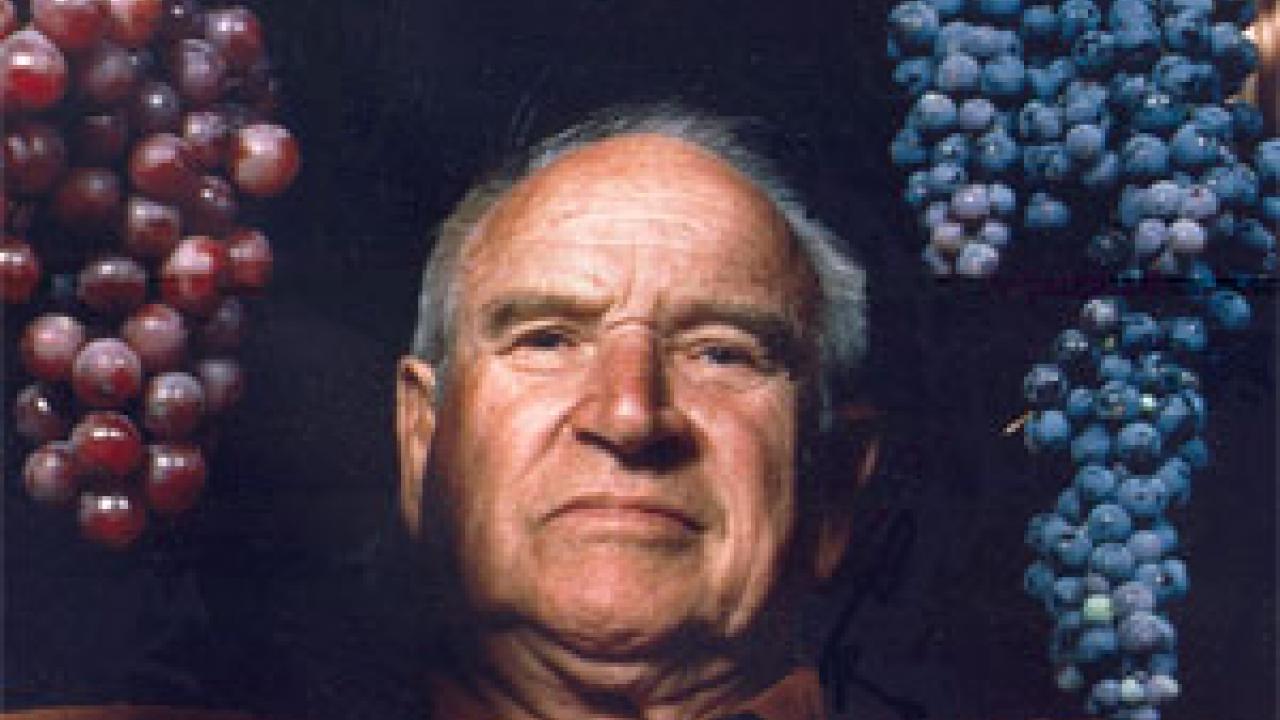 Two renowned faculty members from the UC Davis' Department of Viticulture and Enology, the late Maynard Amerine and the late Harold Olmo, will be named "icons in the Vintners Hall of Fame" by the Culinary Institute of America at Greystone.

The honors recognize the two trailblazers' contributions to the establishment and growth of the California wine industry, which now produces some of the world's finest wines. The awards will be presented during a March 9 gala event at the culinary institute's campus in St. Helena. The honorees were determined by ballots sent to 70 top American wine journalists.

In addition to these honors, the institute will designate legendary winemaker Robert Mondavi as a wine "pioneer" and six winemakers as "founders" in the institute's new Vintners Hall of Fame. These founders are Andre Tchelistcheff, Georges de Latour, Charles Krug, Agoston Haraszthy, Gustave Niebaum and Brother Timothy.

"Maynard Amerine and Harold Olmo truly were giants in the world of grapes and wine," said Andrew Waterhouse, chair of the viticulture and enology department at UC Davis. "Their research and teaching promoted the planting of high-quality wine grapes suitable for the different viticultural areas in California in order to elevate wine quality when it was most needed. We are so pleased that the Culinary Institute of America and the nation's wine journalists have recognized their landmark achievements."

Amerine's research on the technical aspects of grape growing and winemaking invigorated the California wine industry as it recovered from Prohibition, and is considered by many to be the cornerstone for the industry's success in the world wine community.

With a colleague, Amerine developed the system of classifying wine-growing regions by measuring heat summation. He also worked closely with California's wine industry to restore and advance the technical knowledge lost during Prohibition.

He co-authored the books "Wine: An Introduction," which has become a classic in the field, and "Wines: Their Sensory Evaluation," which helped establish an objective basis for wine tasting. He also contributed significantly to the scholarly literature in the areas of wine-judging methods, wine and wine-must analysis, color, aging and fermentation control.

In addition to his research, Amerine trained hundreds of students who went on to become winemakers and grape growers. He retired from UC Davis in 1974, but remained active as a writer and recognized expert on wine. He died in 1998 at the age of 86.

Olmo was a world-renowned grape geneticist, who developed some 30 grape varieties and improved or authenticated many more. During his career, he traveled the world in search of rare or endangered grapevines, bringing cuttings back to UC Davis to be studied and propagated.

The varieties he developed include the Perlette, his first table grape, as well as the Ruby Cabernet, Emerald Riesling, Centurion, Carnelian Symphony, Rubired, Carmine and Flora wine grapes. Colleagues note that his work on the Chardonnay grape was responsible for developing it from an insignificant variety into California's most important wine grape variety, now grown on nearly 100,000 acres throughout the state.

By developing varieties that would grow and ripen at various times and under different environmental conditions, Olmo was responsible for greatly expanding California's agricultural industry.

His many awards include the Laureate and Medal for Outstanding Contributions to World Viticulture from the Office International de la Vigne et du Vin; the Papal Medal, Benemerenti, from the Catholic Church; and the Rockefeller Spirit of Service Award. He was a Guggenheim fellow, Fulbright scholar and a consultant to the United Nations for more than 20 years.

UC Davis' Department of Viticulture and Enology, which grew out of an 1880 mandate by the California Legislature, is the nation's premier university research and teaching program devoted to the sciences of grape growing and winemaking. Its research is focused on wine flavor and sustainable production, while its teaching program is designed to graduate students who integrate science and critical thinking so that they can create the next generation of California wine style.