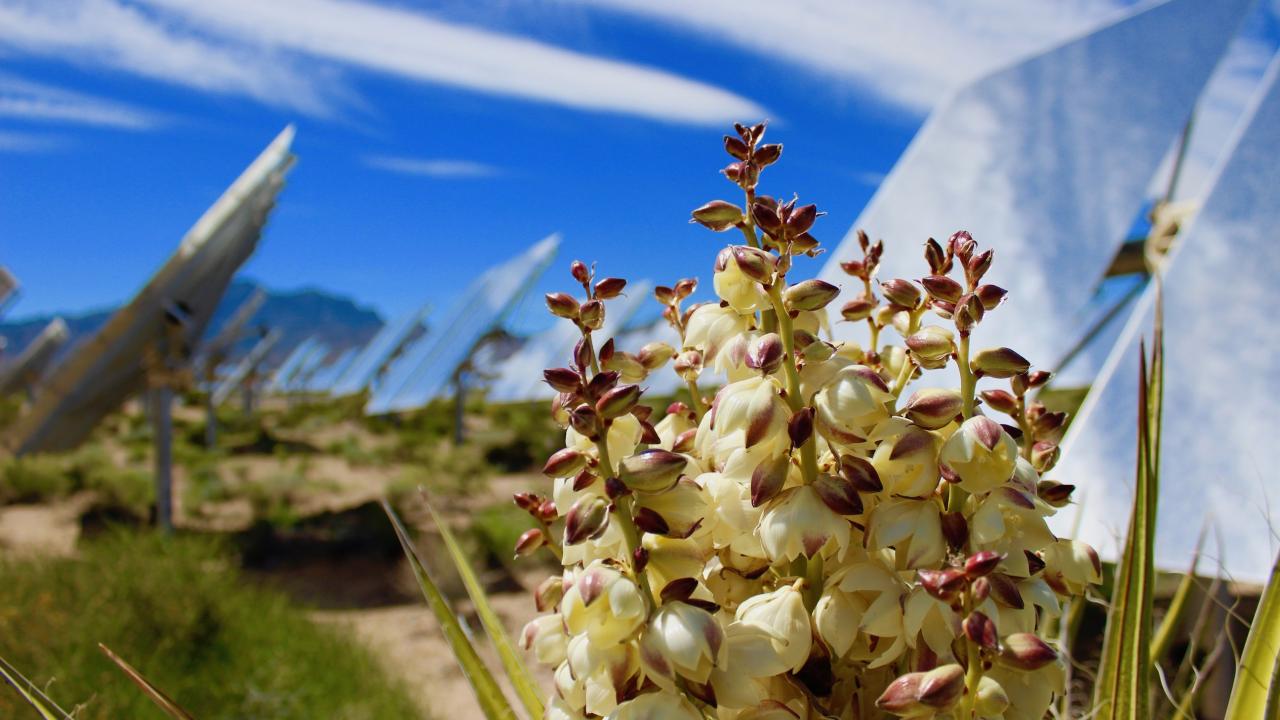 Cacti and Other Iconic Desert Plants Threatened by Solar Development

With their tough skins, pointy armor and legendary stamina, cacti are made to defend themselves from whatever nature throws at them.

But large solar energy facilities are one threat that cacti weren’t built to withstand, according to a study by the University of California, Davis.

The study, published today in the journal Nature Sustainability, chronicles the impacts of ground-mounted solar energy development in the Mojave Desert on native plants and their cultural significance to indigenous tribes in the region.

“We’re talking about iconic and threatened plants — cacti, especially, and Mojave yucca,” said co-leading author Steve Grodsky, an assistant research ecologist at UC Davis. “These are the plants most people envision when they think about the desert, and they’re also the most negatively affected by solar energy development.”

Solar energy is a key strategy for reducing greenhouse gas emissions and the threats of climate change. But like any development, where it’s sited affects its overall environmental sustainability.

UC Davis Assistant Professor Rebecca R. Hernandez and Grodsky are exploring where renewable energy can best coexist with wildlife, biodiversity and the environment to achieve overall sustainability. Their work is part of their Wild Energy Initiative, a research initiative of the UC Davis John Muir Institute of the Environment, and of the Energy and Efficiency Institute.

“This is really our moment to double down,” said co-leading author Hernandez. “We need to not only build out renewable energy, we also need to develop it in the places that produce positive impacts. This isn’t just about saving the cacti. It’s about our need to achieve both climate change goals and sustainable development goals, which include protecting terrestrial ecosystems, at the same time.”

For the study, the scientists measured the impact of solar development decisions on desert plants at Ivanpah Solar Electric Generating System, one of the world’s largest concentrating solar power plants. They found negative impacts on the desert scrub plant community, including plants of cultural significance to 18 indigenous tribes.

Among them are the Mojave yucca, a Joshua tree relative. Its leaves and fiber historically were used for making shoes, baskets, and building structures. Its roots can be used for soap, hence its common name “soap yucca.” Other plants have provided medicine, tools and food, such as the fruits and pads of the beavertail prickly pear cactus.

There are a variety of ways to prepare land for solar installations, and some of these methods are more harmful to the desert plant community than others:

“From a management perspective, there are things we can do to help conserve native desert plants at solar facilities,” Grodsky said. “But it’s best to develop solar energy in marginalized lands like urban areas, places where ecosystems are heavily altered, rather than undeveloped desert.”

Previous research by Hernandez, Grodsky and colleagues examined dozens of alternatives to installing solar on undisturbed lands. These include siting solar on contaminated sites (like Superfund sites), landfills and salt-affected lands. Other options include “agrivoltaics,” which co-locate agriculture and solar energy, and — perhaps most promising — on the rooftops of large commercial buildings, such as warehouses.

This study received funding from the California Energy Commission and the Bureau of Land Management’s California Office.