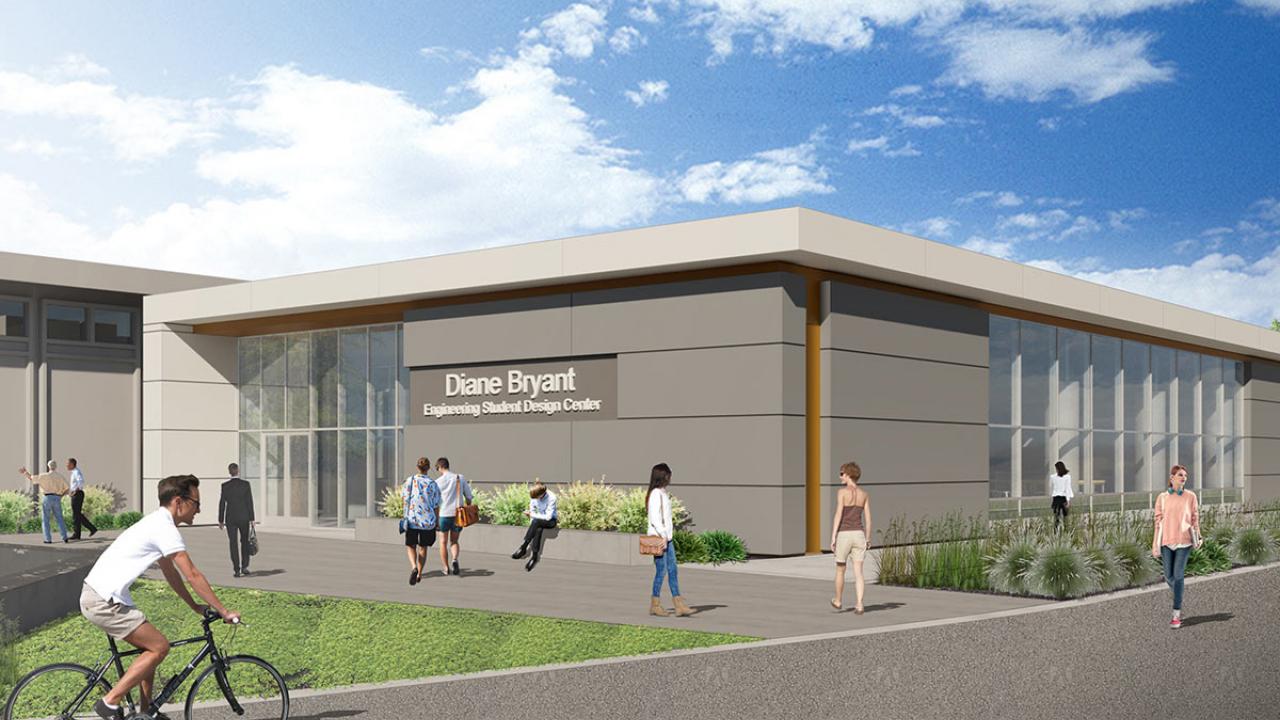 Representation and diversity are two words that Diane Bryant champions.

With her gift to name the new Engineering Student Design Center at the University of California, Davis, the alumna and information technology executive hopes to inspire women and other underrepresented students in science, technology, engineering and mathematics, or STEM; fund essential learning for aspiring engineers; and solidify her legacy as a leader in tech. She graduated in 1985 with a Bachelor of Science degree in electrical and computer engineering.

Bryant’s $6.5 million historic gift is the largest-ever single donation to the College of Engineering by an individual. The Diane Bryant Engineering Student Design Center — now under construction after the groundbreaking last October and due to open in fall 2022 — will offer hands-on educational experiences and encourage students to envision how they will change the world.

“Diane Bryant’s transformative gift allows us to achieve our college’s top priority for undergraduate education: expanding our engineering design curriculum and renovating the hub of our design ecosystem,” said Jennifer Sinclair Curtis, who served as dean of engineering until stepping down in December.

From practice to start-up

The new center will provide an inclusive, supervised space to practice manufacturing and fabrication techniques and include a student start-up center for entrepreneurial ventures. Team projects and real-world applications will add to students’ business acumen, as they develop the collaborative skills and hands-on experience necessary for success.

It will also stand as an enduring symbol of Bryant’s dedication to diversify the field of engineering.

“My hope is the Engineering Student Design Center provides a visual reminder that everyone can succeed in the field of technology,” Bryant said, noting how rare women and students from historically underrepresented groups are in her field. “I hope my gift helps to expand the population of students interested in exploring the possibilities of STEM.”

Entirely donor-funded, the ESDC has been made possible by dedicated supporters who have contributed to the $2 billion universitywide fundraising campaign, “Expect Greater: From UC Davis, for the world.” John Baum ’69 and his wife, Mindy, gave an early gift of $5 million to the project. Other key donors include Brian Underwood M.S. ’91 and Carol Blacutt-Underwood; John Wasson ’84 and Gina Wasson; and Joy Dorf and her husband, the late Professor Emeritus Richard C. “Dick” Dorf.

A first-generation college student who experienced homelessness at 18, Bryant herself succeeded against all odds to go through college and become a leader in her field.

“Our deep appreciation for Diane is beyond words,” Chancellor Gary S. May said. “Her gift will not only transform our engineering students’ educations, it underscores UC Davis’ commitment to diversity, equity and inclusion. Seeing her name every day will show all students — especially women — that they can achieve anything they work for.”

After earning her degree, Bryant gained an entry-level position at Intel and would go on to have a distinguished 32-year career at the industry giant, rising to become  its most senior technical woman. Her four patented technologies came with the invention of the laptop computer in 1990, including the invention allowing the computer laptop to dock and undock while active.

In 2017, Bryant joined Google as COO of Google Cloud. Today she is the CEO and chairperson of NovaSignal Corp., a medical start-up that develops robotic ultrasound technologies to scan blood flow in the brain.

“Diane’s experiences as a first-generation college student who has risen to the top of technology leadership showcases what a UC Davis engineering education can provide. Her gift further cements UC Davis’ status as a leading engineering school for women,” Curtis said.

In the 2020 QS World University Rankings, UC Davis tied at No. 1 in the nation for diversity and internationalization. The College of Engineering’s most recent data show 30.1 percent of its undergraduate population are women, well above the 2019 national engineering-program average of 23.9 percent. Similarly, 22.8 percent are underrepresented minorities, compared to 18.5 percent nationwide.

Many factors motivated Bryant’s decision to give back to her alma mater but a powerful one stemmed from her own undergraduate experience. The College of Engineering’s welcoming structure helped her thrive as a first-generation and transfer student in a new, challenging environment.

“Having attended American River College my first two years, UC Davis was my lifeboat. The transition was positively seamless,” Bryant said. “A third of all community college students are the first in their family to attend college and over half are people of color. The fact that UC Davis explicitly invests in recruiting and developing students from these institutions is a statement of their true belief in the value of a diverse population.”

Bryant noted that the “field of technology is severely underrepresented,” with a majority of the workforce being male and white. Students from all backgrounds should have an equal opportunity to build technology careers, she said, adding that “the industry is so intellectually and financially rewarding.”

She believes that diverse perspectives and experience will also strengthen the field itself, and education is the place to start building that strength.

“Rather than simply preach the importance of greater representation in STEM, I realized I needed to directly invest in the university engineering system and support the creation of a more diverse pipeline,” she said.

In addition to philanthropy, Bryant lectures, mentors, and invests in start-up companies to help nurture a diverse population of young thinkers who will become the influential leaders of tomorrow. Bryant also gives her time to UC Davis, serving on the College of Engineering Dean’s Executive Committee and the Chancellor’s Board of Advisors.

She looks forward to watching this industry, which she herself has helped shape, grow and evolve.

“The amazing brain power of the engineers graduating from UC Davis will create our future,” she added. “Success will be achieved when there is no longer a majority population in tech, but rather a broad community representing our nation’s population. The opportunities are endless.”