Updated 7:30 p.m. Dec. 1: Aggies win! Aggies win! UC Davis today defeated Northern Iowa, 23-16, to advance in the Football Championship Subdivision national playoffs. A packed Aggie Stadium — and a national audience on ESPN3 — saw the Aggies compete for the first time in the postseason since moving up to the NCAA’s Division I.

The Aggies (10-2) will play again a week from today, on the road, in a quarterfinal game against the only team to beat them in Big Sky Conference play in the regular season: Eastern Washington (10-2), which advanced earlier today with a win over Nicholls State, 42-21.

The Eastern Washington Eagles defeated the Aggies, 59-20, in the regular season, in a game played on Eastern Washington’s Roos Field, Cheney, Washington. Their playoff game is set for kickoff at 1 p.m. PST Saturday, Dec. 8, also in Cheney. The game will be streamed live on ESPN3.

After today’s victory, Coach Dan Hawkins had this to say about his history-making team: “Well, they’re the gold standard. Back in the old days, we didn’t play these kinds of teams or play at this level. And when I first came here (as head coach), I didn’t want them to be shackled by Aggie Pride or the past. I wanted them to be inspired by our history; they certainly have lived up to it and more.

“Every Aggie that played here will look at this team and see it as the new gold standard.”

You cannot miss this game: Aggie football vs. Northern Iowa this Saturday (Dec. 1) at Aggie Stadium, in the UC Davis program’s first-ever FCS playoff game, one more historic achievement in UC Davis’ 12th and most successful year in the Division I Football Championship Subdivision.

TICKETS: $10 and up; details below

Check the Postseason Central website for news about pregame activities.

Many thanks to Eric Bankston of Athletics Communications for thorough coverage that contributed to this report.

The Aggies went 5-6 a year ago under first-year head coach Dan Hawkins, an Aggie football leading himself leading up to his graduation in 1984. In his second year leading the team, he and the Aggies turned things around in a big way — breaking into top-25 national rankings for the first time (and the top 10 and ultimately the top five) and winning their first Big Sky Conference championship, compiling a 7-1 record — the most conference wins in program history. (Nine wins overall, against two losses, is also a program record.) Along the way, the Aggies won six in a row and never lost at home.

No wonder Hawkins is a coach of the year — another first for the Aggie program!

UC Davis Big Sky Championship T-shirts and hoodie are on sale! See below.

The Big Sky Conference chose Hawkins and Eastern Washington’s Aaron Best for coach of the year honors, as announced Nov. 21. UC Davis, Eastern Washington and Weber State shared the conference title, and all three are in the FCS playoffs.

“You cannot achieve excellence by yourself,” Hawkins said about his coaching award, as quoted in this Aggie Athletics news release. “There are a thousand invisible moments that occur each and every day by everyone associated with UC Davis football.

“I am humbled with this award, and pleased to accept it on behalf of everyone associated with one of the great academic and athletic programs in the country. This is recognition for a job well done by everyone within UC Davis Athletics — and still continuing. Go Ags!”

The day before the Hawkins coach-of-the-year announcement, UC Davis received a program-record 12 All-Big Sky awards, a collection of honors that includes Offensive Player of the Year — the second year in a row this award went to an Aggie: junior quarterback Jake Maier this season and senior wide receiver Keelan Doss last year are the only UC Davis players in program history to receive the league’s top offensive award.

This incredible season comes amid Aggie football’s centennial year. Take a look back in this story from UC Davis Magazine.

Maier, a finalist for the Walter Payton Award (the Heisman of the FCS), finished the regular season as one of the best passers in the nation. He led the Big Sky and was third in the FCS in passing yards per game (307.8) and passing yards (3,387).

Doss, another Walter Payton Award finalist, earned All-Big Sky honors for the third year. In each of the last two seasons, he achieved at least 100 receptions and 1,000 receiving yards for the second year. Entering this year's postseason, he was No. 2 in the nation averaging 9.1 receptions per game, and had 1,054 receiving yards and nine touchdowns — impressive numbers when one realizes that opposing teams drafted game plans all season long specifically designed to stop him.

From regular season to playoffs

The UC Davis season began with wins over San Jose State (a Division I Football Bowl Subdivision program) and San Diego, after which the Aggies debuted at No. 23 in the STATS FCS Poll.

LOOK AT ALL THE POINTS!

In the third week of preseason, the Aggies lost at Stanford (though we shall never forget the Aggies’ win down on that other Farm in 2005), but, with a strong effort against the Division I FBS program (ranked ninth in the nation at the time), the Aggies moved up to 21st in the poll. Then came six straight wins over seven weeks (including a bye), during which time the Aggies moved up in the poll every week, peaking at 4th. UC Davis appeared in the top 25 for 11 weeks straight, finishing the regular season in the 7th spot.

The NCAA’s FCS Committee rewarded the Aggies with the sixth seed out of eight in the 24-team playoff bracket, announced Nov. 18. The eight seeds received first-round byes and are second-round hosts to the winners of Nov. 24’s first-round games between the other 16 teams. More on the 2018 FCS Playoffs.

Now comes the second round, in which the Aggies (9-2 overall) will square off against the Panthers of Northern Iowa (7-5), who finished the regular season in a tie for third place in the Missouri Valley Football Conference. Northern Iowa, of Cedar Falls, advanced in the FCS playoffs with a 16-13 win at home last Saturday over Lamar (Beaumont, Texas) of the Southland Conference.

With a win this weekend, UC Davis could once again meet up with Eastern Washington — the team that handed the Aggies their only conference loss. The Eagles will advance if they defeat Nicholls State (Thibodaux, Louisiana) of the Southland Conference; they will meet this Saturday at EWU in Cheney, Washington, kickoff 2 p.m. PST, two hours before the UC Davis-Northern Iowa game gets underway. 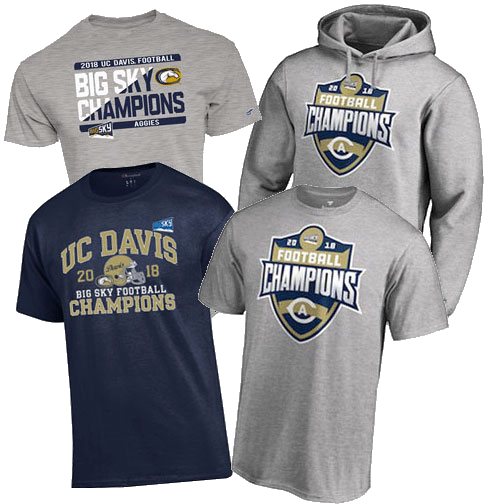 FREE ADMISSION FOR STUDENTS: Pick up your tickets (one per student with ID) at the ticket office. (Check the Postseason Central webpage for additional times and locations of ticket distribution.)

RADIO: Sports 1140 KHTK radio over the air (AM) or online via TuneIn.