Is There a Doctor In the House?

Resident physician Tommy Saborido had just started his shift in the emergency department of a tiny Shasta County hospital last summer when a young woman showed up with symptoms that alarmed him.

The 31-year-old patient with excruciating migraines had been vomiting. Further evaluation determined she had also experienced sensory loss in her arm, and prior to that, a neck injury caused by popping her sore neck. Saborido suspected the onset of a stroke, or worse.

He quickly ordered a helicopter to whisk the debilitated patient from Mayers Memorial Hospital District in Fall River Mills, raising her aloft into the warm evening within view of picturesque Mount Shasta, and landing atop UC Davis Medical Center in Sacramento, the same hospital where Saborido was completing his family medicine training.

His quick-thinking that day saved the woman. She recovered from a vertebral artery dissection, a tear in the lining of the artery that supplies blood to the brain.

The experience also reinforced Saborido’s decision to become a rural doctor, a profession in short supply. The scarcity of rural doctors has prompted the UC Davis School of Medicine to launch initiatives to attract more students who grew up in remote communities and create training opportunities in small, community hospitals.

Saborido, who has worked occasional shifts at Mayers Memorial for more than a year, has just become a staff physician there immediately after completing his third and final year of residency this summer.

‘The need is overwhelming’

Country doctors are known for being a jacks-of-all-trades, the MacGyvers of the medical field who do whatever it takes to heal patients — sometimes in the absence of high-tech equipment or available specialists. But rural medicine is also a field that fewer students and residents nationwide are choosing to pursue — barely 12 percent of primary care physicians practice in rural settings, which is where 20 percent of the population lives. The need for rural doctors is expected to increase sharply, as a significant portion of current practitioners are within 10 years of retirement age.

“There’s a need for docs all over, but rural communities have been significantly under-resourced for a long time,” said Micaela Godzich, a former country doctor who works in the UC Davis Department of Family and Community Medicine, where she develops meaningful clinical experiences for resident physicians. “The need is overwhelming.”

Saborido was raised in Chico and attended its local community college — the kind of student who catches the attention of the UC Davis School of Medicine admissions office. Research shows that students who are from rural areas, attended community college, and come from socio-economically disadvantaged backgrounds, similar to Saborido’s, are more likely to become primary care physicians bent on caring for the medically under-served.

“It’s like practicing medicine in the 1940s and 50s when a true general practitioner did a little of everything.”
— Tommy Saborido

Saborido originally thought he was destined to become a cardiothoracic surgeon … that is, until he met medical school classmate Kelsey Sloat, a native of Fall River Mills. Sloat, now his wife, introduced Saborido to country living and to the community’s best-known doctor who for years has been itching to retire, Dan Dahle.

Saborido fell in love with the country lifestyle and the prospect of being a country doctor.

As a new resident working long hours in Sacramento’s bustling UC Davis Medical Center emergency department, Saborido longed for weekends and holidays in Fall River Mills, 220 miles away, where he could shadow Dahle.

“It’s like practicing medicine in the 1940s and 50s when a true general practitioner did a little of everything,” Saborido said during an interview at the small, single-story hospital. “Dr. Dahle has since been my role model and shown me what it looks like on a real and practical basis to work and care for patients in a setting like this.”

In Fall River Mills and surrounding communities, where the total population is less than 15,000, practicing family medicine covers a wide scope: caring for newborns, spending overnight shifts in the six-bed emergency department, checking on elderly patients in the hospital’s skilled-nursing wings, making house calls and performing sports physicals, among other duties.

Then there are the grocery store consults, which happen all the time, Dahle said, because people always have questions for their community doctor, no matter the location or the hour.

Mayers Memorial even acknowledged this fact on its Facebook page recently, when it announced with enthusiasm Saborido’s commitment to work there: “...he looks forward to the day when people catch him in Ray’s and make an attempt at a quick doctor’s visit in the aisles.”

Rural citizens love their rural doctors — if they stick around.

Too often, however, new doctors end up in places like Fall River Mills because it’s an easy way to dissolve student debt. This is because generous federal loan forgiveness programs pay off hundreds of thousands of dollars in young doctors’ student debt in exchange for practicing in medical shortage areas for a few years.

“In the 12 years I’ve lived here, I’ve probably had six different doctors,” said retiree Bob Jehn, a former mayor of Cloverdale in Sonoma County and an active member of the Rotary Club of Burney-Fall River. “The prospect of having a single physician, especially at my age, for the rest of my life is not only appealing, but is a dream come true. For rural communities, including this one, that’s been very difficult to make happen.”

“The person who wants to come here, live here and engage in the lifestyle — it’s not for everyone,” said Louis “Louie” Ward, chief executive officer of Mayers Memorial Hospital District, the 230-employee, economic engine of Northeastern Shasta County.

Although he can’t compete with the hospitals in coastal cities that lure young doctors, Ward seeks to recruit people who want a variety of responsibilities, prefer slow-lane community life, and appreciate the old adage: It’s a great place to raise a family.

“Most people enjoy the lifestyle once they give it a shot,” said Ward, a Bay Area transplant who married into a family from Fall River Mills, where he and his wife are raising four children.

Leaders of Mountain Valleys and Mayers Memorial set their sights on Saborido a few years ago and have allowed him to work shifts in their inpatient and outpatient settings, side-by-side with Dahle, even though Saborido’s UC Davis residency training program does not have a formal relationship with either organization.

It was a savvy get-to-know-you move for everyone because Dahle, a Vietnam War medic and local fixture for more than three decades, refused to retire until a young doctor arrived and committed to stay.

University of California medical schools have a young but rich history preparing a workforce to better meet the state’s evolving health needs.

Between 2004 and 2008, each school began implementing programs to increase the number of physicians from underrepresented groups and placing them in communities they are most needed, in order to achieve health equity.

Among the initiatives at UC Davis is Rural-PRIME, which offers medical students rotations in rural communities, often in places at or near where they grew up. Most of these opportunities are in the Central Valley but also north of Sacramento and in rural sections of the Central Coast.

In addition, UC Davis has launched a $1.8 million grant-funded initiative by the American Medical Association to expand access to quality care in pockets between Sacramento and Portland. It is known as COMPADRE, which stands for California Oregon Medical Partnership to Address Disparities in Rural Education and Health. The partnership with Oregon Health & Science University seeks to place hundreds of medical students and residents across a network of hospitals and federally qualified health centers.

Rural-PRIME and COMPADRE are taking major steps toward fulfilling the School of Medicine’s mission of transforming the health of the communities where students and residents will one day serve as physicians.

“What UC Davis does is, we offer that richness, and that exposure, and that immersion into the breadth of clinical care needed to be a well-rounded doctor now, to take forward once you’re in practice,” said Godzich, an associate residency program director for UC Davis Health. Although Saborido wasn't in the rural track as a medical student, he shares the top characteristics that rural doctors possess, according to Godzich and Dahle.

Those traits include: a personal connection to the rural area, the ability to create and cultivate relationships, a commitment to primary care medicine, flexibility and wanting to be involved in the community. It also helps if they are comfortable with uncertainty and with performing procedures that might be referred to specialists in a larger hospital.

Saborido spent months contemplating whether to work for Mountain Valleys, Mayers Memorial, or both, like Dahle, as he approached the June 30 conclusion of his residency.

He chose Mayers Memorial in part because the hospital will soon open an outpatient clinic for primary care medicine. It’s a similar role to what he’s done in Sacramento, shuttling between the family medicine clinic and the emergency department.

“UC Davis has absolutely prepared me very well to welcome this opportunity that I have right now,” he said.

Saborido and his wife recently purchased a house in Fall River Mills. Sloat, a graduate of the Rural-PRIME track at the School of Medicine, will give birth to their third daughter this fall and looks forward to returning to clinical work in the near future. Saborido has been talking about getting involved in the Rotary Club, an elementary school and the 4-H Club.

He also plans to offer himself as a mentor for UC Davis students and residents.

“I would like to be able to do what Dr. Dahle did for me in a sense — show individuals who are interested or don’t know if they are interested but end up finding out that they love it — find out what it’s like to be a rural family doctor.”

Saborido is incredibly grateful for the many professors who helped him pursue his dreams. He’s confident that what he’s learned will improve the health of Fall River Mills and surrounding communities.

“I would like to be able to do what Dr. Dahle did for me in a sense — show individuals who are interested or don’t know if they are interested but end up finding out that they love it — find out what it’s like to be a rural family doctor.”
— Tommy Saborido

“I’m the oldest of five kids of a single mom, we grew up on government assistant programs, and to be in a position now where I’ve gone through college, through a fine medical school such as UC Davis, and then residency, I have an incredible, incredible opportunity to give back,” Saborido said.

“And it’s not just in a way where I’m listening to hearts and lungs with my stethoscope, but really being there as an ear to my patients. That is what’s really satisfying to me.”

That happened to be the one-year anniversary of the remarkable day that deepened his desire to be a country doctor — when he correctly diagnosed a patient’s stroke and arranged for a helicopter to fly her to UC Davis Medical Center, which ultimately saved her life. 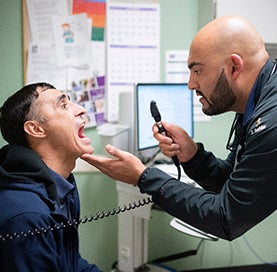 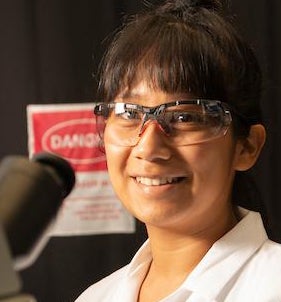 6 Ways to Research as an Undergrad in the Biological Sciences

Working with renowned life sciences faculty, students have a close and personal view of the science leading to breakthroughs. Discoveries start with a foundation in curiosity.