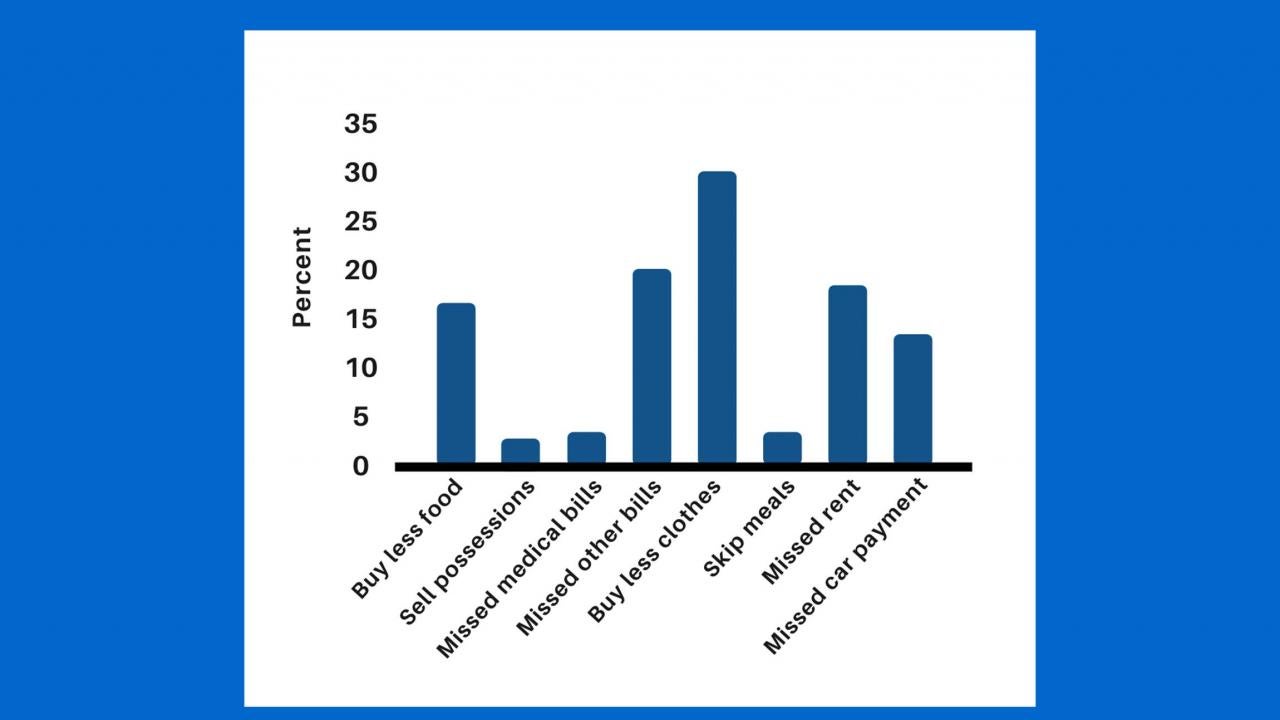 More than half of Latina mothers surveyed in Yolo and Sacramento counties reported making economic cutbacks in response to the pandemic shutdown last spring — saying they bought less food and missed rent payments. Even for mothers who reported receiving the federal stimulus payment during this time, these hardships were not reduced, University of California, Davis, researchers found in a recent study.

“Latino families are fighting the pandemic on multiple fronts, as systemic oppression has increased their likelihood of contracting the virus, having complications from the virus and having significant economic hardship due to the virus,” said Leah C. Hibel, associate professor of human development and family studies at UC Davis and lead author of the study. “These factors are likely to have a significant psychological toll on these families.”

The study was published Jan. 7 in the journal Traumatology. Researchers administered surveys to 70 Latina mothers March 18 through June 5 of last spring, after the “shelter-in-place” orders went into effect in California in response to the COVID-19 pandemic.

The survey sample consisted of Latina mothers, all of whom are low-income, with 92 percent of the families having an essential worker (either the mother or her partner), in Yolo and Sacramento counties, researchers said. The survey respondents were identified through an earlier UC Davis study on Mexican-origin families living in the region. Yolo and Sacramento counties are in Northern California, which has a higher cost of living than most of the country, but has a relatively high level of social services available, researchers added.

Researchers said that although it has been reported that the stimulus checks may have kept some from falling below the poverty level, cutbacks due to other economic factors still had an effect on these low-income families.

“In other words, though the stimulus may have prevented some families from falling below the poverty line, our analyses suggest that many low-income families are still facing significant financial hardship,” researchers said in the study. “This hardship appears to be placing families on a trajectory toward hunger and eviction.”

Mothers who engaged in cutbacks reported significantly higher levels of stress, depression, and anxiety. Further, receiving the federal stimulus money administered to those whose income was less than $99,000 a year (through the Coronavirus Aid, Relief, and Economic Security Act) was not associated with lower cutbacks, stress, depression or anxiety. Of those surveyed, 65 percent had reported receiving their checks by the time the survey was administered.

Mothers’ depressive symptoms were assessed through survey questions administered by phone. Most were in English, but in some cases, questions were asked in Spanish by native-speaking interviewers. Assessed on a five-point answer scale, mothers were asked such questions as:

Mothers were also asked to indicate whether or not they made any of 12 listed cutbacks (food, rent, cutting back on air conditioning, etc.) in previous weeks because of the pandemic. Of these mothers, 52 percent reported being forced to make economic cutbacks, and they reported higher stress, depressive symptoms and anxiety than those who reported not cutting back.

Researchers noted that the immediate economic impacts of the pandemic on low-income Latina mothers’ well-being suggests that alleviating families’ economic hardship might benefit mothers psychologically. Though the researchers did not find the stimulus payment to buffer the economic or psychological impacts, they suggest the stimulus money was simply not enough.

“Without additional local, state or federal aid, the pandemic is likely to cause severe hardship marked by homelessness, hunger and mental illness. Additional recurring monthly stimulus payments could be a lifeline for families who are struggling to make ends meet,” the researchers wrote.