How Can We Preserve Indigenous Languages?

This story originally appeared on the College of Letters and Science website. See the complete article and additional information here.

For his graduate research comparing languages around the world, Lewis Lawyer couldn’t find a single published reference book on Patwin, an endangered language once spoken in hundreds of Northern California communities, including what is now Davis.

So, on his way to completing his UC Davis doctorate, Lawyer wrote one.

With the release of A Grammar of Patwin by University of Nebraska Press earlier this year, the findings of his dissertation are now available to scholars as well as to Patwin/Wintun people working to revitalize their ancestral language.

In the book, Lawyer (Ph.D., linguistics, ’15) brings together two centuries of work by linguists before him — synthesizing word lists, notebooks, audio recordings and manuscripts in archives across the country. 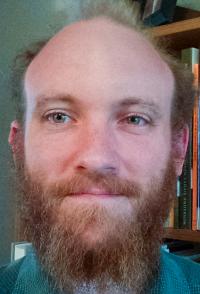 While his graduate studies initially were global in scope, Lawyer switched midway to focus exclusively on Patwin. That U-turn started with a seemingly simple idea. “I thought, ‘Oh, wouldn’t it be cool if I added the local language to my database.’”

But even though he had grown up in Davis, he said, “I didn’t even know what the language was called. I had no idea whether there were speakers. And I had no idea what language family it was in. Suddenly I realized the depths of my ignorance of the place that I call home. I’ve learned a lot since then.”

Before Europeans arrived, there were 100 languages spoken in what is now California — from many different language families. By contrast, most languages in Europe belong to the same Indo-European language family, deriving from a common ancestral language.

Dialects of Patwin, part of the Wintuan language family, are Indigenous to a large swath of the Sacramento Valley — from present-day Vallejo and Suisun in the south, north to Colusa, west past Lake Berryessa and almost to Clear Lake in California’s Northern Coast Ranges, and east to the Sacramento River banks. The other Wintuan languages, Nomlaki and Wintu, are to the north.

Today, one living person is known to speak Patwin as a first language, Lawyer said.

Tribes have produced language materials for their own use. Publication of A Grammar of Patwin is historic, the Yocha Dehe Wintun Nation Tribal Council said in a statement:

“Language is the basic building block of identity. Our ability to define ourselves derives, first and foremost, from ownership of the words that constitute that definition. This is as true now as it was back in the time when forces were seeking to exterminate our people by requiring our ancestors to attend schools where speaking Patwin was forbidden. This book represents a monumental step forward in reclaiming Patwin from those dark times, and we are thankful to the many people who have worked hard and risked much to keep ours a living language.”

This year is the 200th anniversary of the first Patwin word list, created by Spanish missionary and linguist Felipe Arroyo de la Cuesta with Suisun Patwin speaker Samuel Capita. Numerous scholars since then made written and audio recordings of Patwin, including naturalist and ethnographer C. Hart Merriam and anthropologist A. L. Kroeber. “There's so much archival material on Patwin — and so little had been published,” Lawyer said.

A half-dozen linguists, from the 1920s through the 1980s, began work on a grammar but never completed one, he said. Lawyer synthesized the work of his predecessors, reconciling different phonetic alphabets in the process and analyzing their findings.

“Lewis Lawyer’s Grammar of Patwin stands out as a major contribution to scholarship on California Indian languages, and perhaps more importantly, to the Patwin/Wintun people,” said Martha Macri, a professor emerita of Native American studies and linguist who served as Lawyer’s dissertation advisor.

In many ways, the publication of the Grammar represents a continuation of the partnership between UC Davis and the Patwin people. — Martha Macri, professor emerita of Native American studies

The land where UC Davis sits was once home to a Patwin village. The campus Native American Contemplative Garden in the Arboretum between the law school and the Robert and Margrit Mondavi Center for the Performing Arts honors the people who once lived there.

A plaque outside the Mondavi Center commemorates the 13 Patwin ancestors whose burials were disturbed in 1999-2000 during the center’s construction.

UC Davis pays homage to the Patwin people at public events. That statement can be found here.

At Macri’s recommendation, Lawyer worked closely with the tribes. He attended language revitalization conferences and helped participants navigate archival materials, consulted with tribes on language materials they were creating, did translations, taught a language class and copied archival source material onto thumb drives for Patwin learners.

Lawyer, who is of European descent, doesn’t consider himself a Patwin speaker. In teaching a language class, he took care to identify by name the source for the vocabulary he was sharing — words recorded by linguists and in many cases spoken by an ancestor of the students.

“I’m really conscious that I play an ancillary part,” said Lawyer, who now works as a dictionary database manager for Cambridge University Press in England. “I’m on the sidelines of preserving the language, because the Patwin communities are actively keeping the language alive.”

Kathleen Holder is a content strategist in the College of Letters and Science. Contact her by email or phone, 530-752-8585.