From Shady Forest to Sunny Pasture, How Well Can a Frog Adjust to Hotter Habitats?

Strawberry poison frogs, also known as “blue jeans frogs,” are smaller than a quarter, with bright red bodies and navy-blue limbs. They inhabit shady Costa Rican forests, but fewer of them live there since humans began cutting their forest habitat to create farmland. Sunny fields and pastures are hotter and drier than the forests, so scientists wanted to know how strawberry frogs were adapting to their new environment.

Their study, published today in the journal Biotropica, found that when these frogs switch from shady forests to hotter pastures, they can take the heat up to a point—but they have their thermal limits.

“We’re trying to understand what happens to species when we transform forests for human land uses,” said Justin Nowakowski, a study coauthor and a postdoctoral scholar at the University of California, Davis.

Some ability to adapt

For the study, the researchers built mini temperature-controlled frog habitats to see which temperatures the frogs gravitated toward. Frogs from sunny pastures tended to seek out higher temperatures than their forest friends — but their ceiling for heat tolerance had not increased.

“We found that if there’s an increase in temperature, there may be some ability to acclimate or adapt, but in situations where temperatures change drastically, it may be bad news for them,” said coauthor Michelle Thompson, a conservation ecologist and herpetologist at the Field Museum in Chicago.

Unlike birds and mammals that can heat their own bodies to a constant temperature, frogs are “cold-blooded” and depend greatly on the environment to regulate their body temperature. To survive in converted fields and pastures, the strawberry poison frogs camp out in the few remaining shady places, like isolated trees and fallen logs. 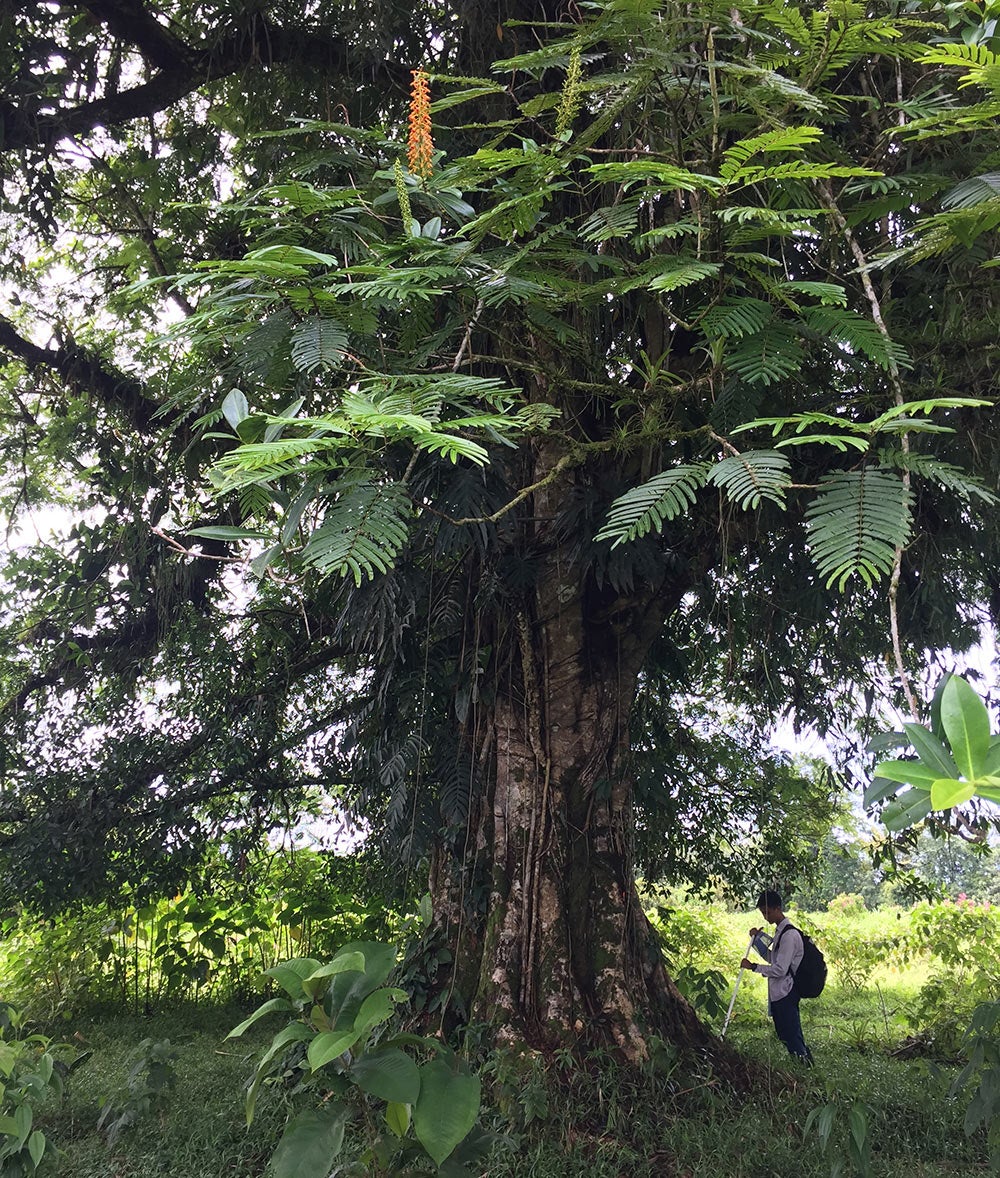 Adrian Manansala from the University of Guam conducts fieldwork by a remnant tree in Costa Rica. (Juana Rivera-Ordonez, University of Washington)

Taking the temperature of frogs

For the study, the authors conducted field research in Costa Rican pastures and forests and measured the air temperature, as well as the temperature of frogs using an infrared thermometer.

After recording the temperatures of 111 frogs in the wild, the researchers caught 32 of them by hand and brought them back to the laboratory for further research. (While some species of poison frogs are dangerous to touch, strawberry poison frogs are toxic if eaten, but safe to handle.)

“We were using whatever supplies are available in this rural area and MacGyvering it together,” Nowakowski said.

The frog enclosures were long rectangles with a temperature gradient, with one cold end and one hot end. The researchers put each frog into the enclosure for two and a half hours and observed the temperature where the frogs preferred to hang out. Frogs taken from warm pastures chose to spend their time in a warmer part of the enclosure, while the forest frogs preferred a slightly cooler environment.

Bumping up against thermal tolerances

While the frogs changed their preferred temperature, when they were gently exposed to increased heat, the maximum temperature they could withstand didn’t change, regardless of whether they were taken from cooler or warmer areas.

“It appears that for the time being, this species can eke out a living in these converted habitats using different behaviors to avoid extreme temperatures, but this is all subject to change,” Nowakowski said. “On top of habitat change, temperatures are rising due to climate change. These frogs are bumping right up against their thermal tolerances, and it’s unclear whether they’ll persist or not.”

Thompson notes that there is hope in the way the frogs can adapt in the short term to habitat change.

“In the current biodiversity crisis that we’re a part of, we have to think of ways to make changes for positive impact,” Thompson said. “This is something we can act on. Where habitat conversion cannot be avoided, leaving small pockets of vegetation will let small populations of frogs persist. It shows that people can make a change.”

The authors included first author Juana Rivera-Ordonez from the University of Washington, and coauthors Adrian Manansala from University of Guam and Michelle Thompson of the Chicago Field Museum. The research was overseen by senior author Brian Todd of UC Davis.

The study received funding from the National Science Foundation’s Research Experiences for Undergraduates, or REU.

“You can learn a lot about science and research in the classroom, but it’s really all abstract until you go into the tropical forest or the laboratory,” says Nowakowski. “You learn how to develop questions and collect data to answer those questions. For students, it can be really transformative and eye-opening.”

“The REU was an unforgettable experience,” Manansala said. “Before this research program, I had never caught frogs or even held one before, so doing this research was a very new experience for me. This program taught me research skills and knowledge that I still use today and will continue to apply in a future career in science.”