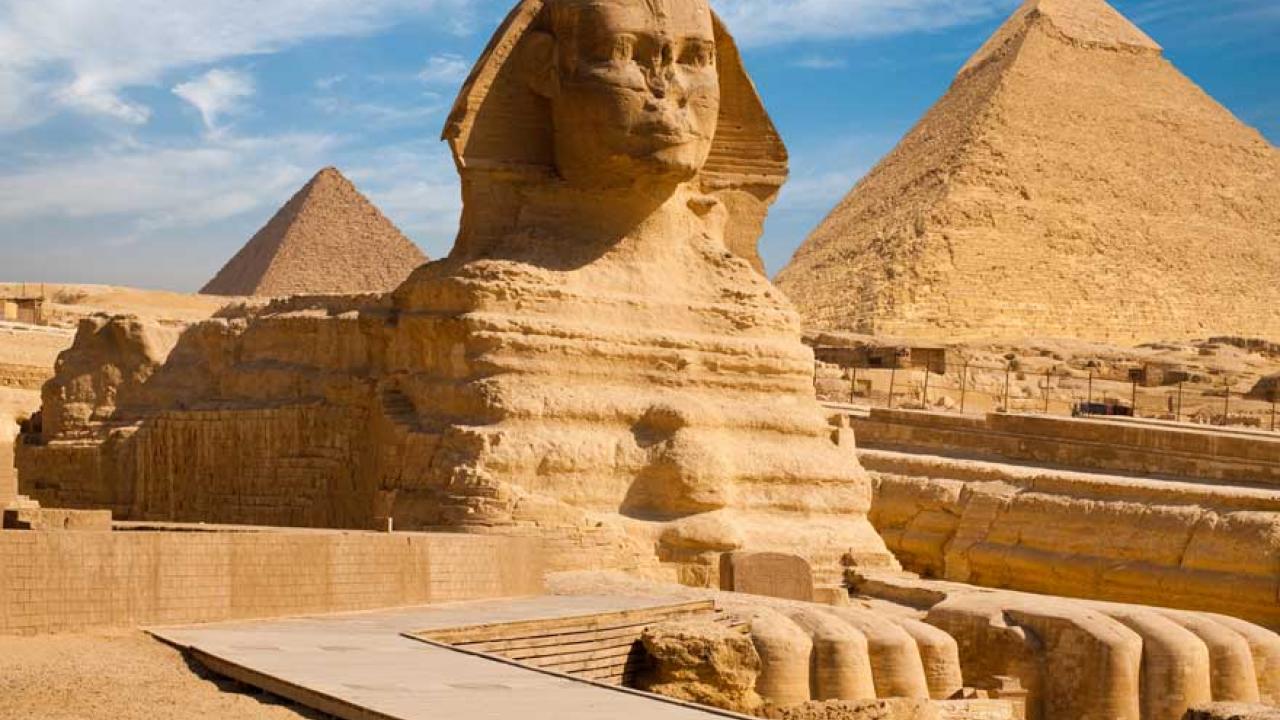 As a consolation for lack of in-person travel, this summer the Arts Blog will take you on a global tour of museums, monuments, and other locales from the comfort of your own home. This week’s stop: Egypt.

Did you miss our previous trips? Visit London, England here, and Paris, France here. Explore Italy here and Spain here. Now, we’re leaving Europe behind and heading to Africa. In our journey through Egypt, we’ll visit both modern museums and ancient monuments.

First we will visit ancient sites in the Egyptian city of Giza, and then we’ll cross the Nile River to explore a museum of antiquities in Cairo.

See the human-headed lion, the Great Sphinx of Giza

This ancient limestone statue is of a Sphinx, a mythological human-headed lion. This Great Sphinx of Giza dates back to between 2575 and 2465 BC. The sheer size of the statue alone is an impressive feat, measuring 240 feet long by 66 feet high. But there’s no need to go traipsing about the desert to get a 360-degree view of the statue. Save yourself the walk and view the Great Sphinx of Giza virtually.

No trip to Egypt would be complete without a trip to the Pyramids of Giza. This trio of pyramids, built over 4,000 years ago, is located just over a kilometer from our previous stop, the Great Sphinx. According to Encyclopaedia Britannica, the pyramids were originally built as tombs for Egyptian rulers. The Great Pyramids are the only surviving wonder of the ancient world, and are now designated as a UNESCO world heritage site.

Egypt’s Ministry of Tourism and Antiquities has partnered with The Giza Project at Harvard University to offer a virtual 360 degree tour of the tomb of Queen Meresankh III. The tomb, like our previous stops, is also located in Giza.

Across the Nile to the Egyptian Museum

Now, we travel to Cairo, only 10 minutes away by car. However, we do have to cross the Nile River. Use the Qasr El Nil Bridge to see the famous four lion statues on your way to the Egyptian Museum. The museum houses almost 160,000 Egyptian antiquities.

Itching for more virtual travel? Stay tuned to the Arts Blog for tours in more countries around the world. Next up: South Africa.