‘The Simpsons’: Essays on Our Everyday Life 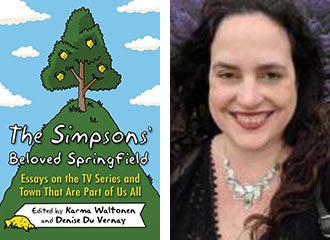 “Simpsons fans will appreciate academics geeking out, and scholars will benefit from this embiggening of Simpson-ology.” — Library Journal

This time they are the co-editors of a collection of new essays, including two they wrote themselves. The volume discusses, as the publisher puts it, “the many ways in which The Simpsons reflects everyday life through its exploration of gender roles, music, death, food politics, science and religion, anxiety, friendship and more.”

The Simpsons, according to the publisher, “changed the world of television, bringing to the screen a cartoon for adults, a sitcom without a laugh track, an imperfect lower class family, a mixture of high and low comedy and satire for the masses.”

Waltonen’s journey with The Simpsons started with the very first cartoon short on The Tracey Ullman Show in 1987.

“They hooked me, so I had the VCR all ready to go when they had their first episode [of the series] in 1989,” Waltonen said in a campus author interview with the UC Davis Library. “In 1999, when I got the opportunity to design a course for the first time, I went with The Simpsons. I’ve been teaching courses on it and incorporating it into my other courses, and I wanted to help others who wanted to teach the show, too.”

This led to The Simpsons in the Classroom: Embiggening the Learning Experience with the Wisdom of Springfield, published in 2010, co-written with Du Vernay (who had taken over Waltonen’s Simpsons class at Florida State University when she moved to UC Davis).

Du Vernay taught college courses in composition, literature, The Simpsons, speech and the humanities for 17 years, and now works in advancement for Loyola University Chicago.

“Nobody ‘steams a ham’ [writes and edits academic material] about The Simpsons quite as well as Denise and Karma,” said Bill Oakley, former writer, producer and showrunner of The Simpsons. “A brilliant book … read their book.”

“The Simpsons really spoke to me,” Waltonen said in her campus author interview. “The family was more like mine than the perfect families on TV back then — they made mistakes, they watched TV, they complained about having to go to church.”

The essay collection includes “What We All Came Here to See — Sex,” by Waltonen; and “This Town Is a Part of Them (and Us) All” by Du Vernay. Together, they write the introduction, “Putting the Spring in Springfield,” and “The Simpsons Timeline (Forever Incomplete).”

Other essays include: “Is Yellow the New Green? The Banal Environmentalism of The Simpsons,” by David Krantz; “Aristotle in Springfield: On Friendship,” by Zachary Tavlin; “Be Sharp: The Simpsons and Music,” by Durrell Bowman; “Will You Take Us to Mt. Splashmore?”: Commercials and Consumerism,” by Brian N. Duchaney; and “Homer as Homework: The Simpsons in the College Classroom,” by Lisa Whalen.