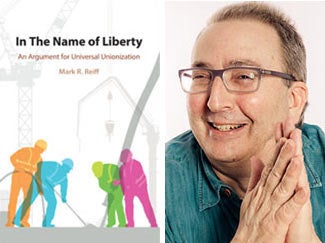 In the Name of Liberty, author Mark R. Reiff says, “reclaims the argument for liberty from the political right; paves the way for political philosophers to give unionization the same detailed attention they have long devoted to inequality, but have not applied to unionization before; and provides the first and only moral argument for universal unionization — the mandatory unionization of every firm — that is consistent with the principles of liberal capitalism.”

In a review, Georgetown history professor Joseph A. McCartin wrote: “[Reiff] deftly demolishes the claims of those who critique unions for infringing individual liberty; then he elegantly constructs in their place not only a powerful liberty-based argument for unionization, but for universal unionization.

“His persuasive contention that strong unions are a prerequisite for the preservation of true liberty within 21st-century capitalism demands the attention of anyone who cares about the intertwined fates of workers’ rights and democracy.”