History professor Sally McKee, who had written and taught on domestic slavery in Renaissance Italy and the Venetian Colony of Crete, changed her field of research when she came across a figure in the 19th century she had never known of before. He was a free African American man, Edmond Dédé, born in New Orleans in 1827, who moved to France in the mid-1850s.

The Exile’s Song: Edmond Dédé and the Unfinished Revolutions of the Atlantic World 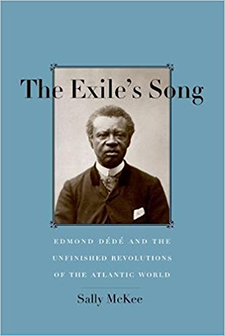 He lived in Paris and Bordeaux for the next four decades, gaining popularity as a composer and music conductor. Not much had ever been recorded or written about him.

Until McKee found out about him.

DéDé (pronounced “day-day”) is the subject of her biography, The Exile’s Song: Edmond Dédé and the Unfinished Revolutions of the Atlantic World (Yale University Press).

“The more I looked, the more I realized he was worth an investigation all his own,” she said. She explained that he initially was going to be part of a larger project involving other Civil War-era expatriates. “What I found was not only a life that was fascinating — the people he met; the challenges he encountered” — but much more, including the unpublished four-act opera he’d written in 1888 — and which ended up buried in a collection of 19th-century opera manuscripts at Harvard. The work is the oldest known opera composed by an African American, she said.

“It was in Harvard’s library, and they didn’t know they had it,” she mused, explaining that a librarian in New Orleans turned her onto its existence in a cache of manuscripts that Harvard purchased from a Paris collection in 2000. Only the overture of the opera had ever been performed.

Morgiane, or the Sultan of Ispahan

The UC Davis Department of Music is in the process of transcribing arias of the opera, Morgiane, or the Sultan of Ispahan, for performance in recital. Selections will be performed, in French, as part of the Shinkoskey Noon Concert Series in the Recital Hall at the Pitzer Center on Thursday, Nov. 16.

McKee said one of the interesting things about DéDé is that he was able to work and perform in ways never possible if he had stayed in his native United States as a free black man. Although he was the fourth generation of a free black family,  a group labeled at the time “free persons of color,” their freedom was not the same as for white people, and his movement was restricted, she said.

The second part of the title, referring to the “Atlantic Revolution,” McKee explained, is a comment on that time in history. The American Revolution wasn’t finished because slavery had not ended; the French Revolution got off to a start, but broke down by the middle of the 19th century; the Haitian Revolution and the freeing of the colony from the French led to a series of dictatorships. So, the major revolutions of the Atlantic world were incomplete and unfulfilled.

The Exile’s Song, she said, “reads more like an adventure than anything.”

Karen Nikos-Rose is a senior public information representative in the Office of Strategic Communications.