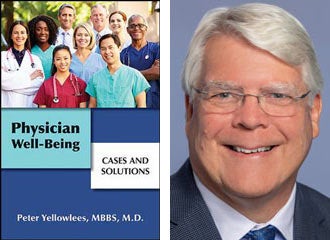 “[Physician Well-Being: Cases and Solutions] successfully captures the scourge that affects the modern-day doctor, who is seemingly pulled in every which direction to perform.” — Jonathan Ripp, chief wellness officer for the Mount Sinai Health System (New York)

According to the publisher, Physician Well-Being’s case studies — fictional but thorough and realistic, one per chapter — allow readers to get inside the minds of physicians and understand their lives and stressors, from long hours and staff shortages to onerous administrative demands.

The consequences, as described by the publisher: 10 to 15 years after entering medical school, the average physician has twice the level of burnout of the average professional. Suicide rates among physicians are 1.4 and two times higher than in the general population for men and women, respectively.

Drawing on experiences from his 30-year career as a psychiatrist, during which he has treated hundreds of physicians, Yellowlees argues in Physician Well-Being that the major reasons for physician distress are organizational and systemic, and focuses on solutions that work, maintaining that changes in the culture and process of medicine aren’t just possible, they’re essential — not only for improving the well-being of health care providers but also for patient care and safety.

In a review, Jonathan Ripp, chief wellness officer for the Mount Sinai Health System (New York City), says Yellowlees “successfully captures the scourge that affects the modern-day doctor, who is seemingly pulled in every which direction to perform.”

“The poignant anecdotes he relates, no doubt derived from a career full of exposure, serve as a platform to spark discussion on the challenges faced by the everyday doctor. ...Perhaps most importantly, his commentaries are infused with optimism, informed by present-day solutions suggesting a pathway forward that is paved by hopeful solutions to overcome the obstacles facing our profession.”

‘B’ Stands for Bamforth and Beer and (New) Book

CANCELED: From Dissertaion to Manuscript