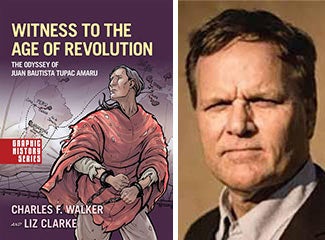 “Juan Bautista’s compelling story of resistance and survival is retold by a master historian and illustrated in an active and energetic style that draws the reader and the viewer deep into the world of people who fought long and hard to topple a powerful empire that once spanned the globe.” — Leo J. Garofalo, co-author of “Documenting Latin America: Gender, Race and Empire”

Some stories of the past are so remarkable, they deserve to be shown as well as told.

A new graphic history by Professor Charles Walker brings to life the odyssey of Juan Bautista Túpac Amaru, whose account of his 40 years as a Spanish political prisoner was so harrowing that it was discounted as fiction and lingered for decades in obscurity.

The Association of American Publishers recently announced Witness to the Age of Revolution: The Odyssey of Juan Bautista Túpac Amaru as the winner in the category of nonfiction graphic novel in the association’s 2020 Professional and Scholarly Excellence, or PROSE, awards competition. Read more.

Witness to the Age of Revolution uses images drawn from archival documents to chronicle Juan Bautista’s story and show readers how historians construct the past. Illustrated by South African artist Liz Clarke, the publication is part of a graphic history series published by Oxford University Press.

“I saw it as a fun summer project, but it took me two years or so,” Walker said. “Historians are trained to guide [readers] through writing. And in a comic, you can’t do that — you have to let the images speak.”

Walker briefly wrote about Juan Bautista in his award-winning 2014 book The Túpac Amaru Rebellion. That book focused on the 1780–83 revolt that was launched in Peru by Juan Bautista’s half brother, José Gabriel Túpac Amaru, and spread to become the largest rebellion in the history of Spain’s American empire.

Walker said he had long wanted to give more attention to Juan Bautista and his ringside view of events during the Age of Revolution (1780s to 1820s) in the Americas and Europe.

A descendant of the last Inca rulers, Juan Bautista was imprisoned on both sides of the Atlantic after José Gabriel was executed and much of his family arrested or killed. Juan Bautista’s ordeal included two years in jail in Cusco; a 700-mile foot march in chains over the Andes to Lima; two years aboard a ship to Spain; and more than 30 years of detention in Ceuta, a Spanish garrison city on the northern tip of Africa.

In 1822, he was freed with the help of a priest and a Maltese-Argentine naval veteran and sent to Argentina, where he was hailed as a hero. Juan Bautista died in 1827 in Buenos Aires without fulfilling his dream of returning to his native Peru.

“I want to chronicle his story but not speak for Juan Bautista Túpac Amaru, whose first language was Quechua,” Walker writes in his preface.

In his own account of his life, Juan Bautista expressed his “hope that these memoirs make people think about how to prevent tyranny, which proved in my case to be so abominable.”

Kathleen Holder is a content strategist in College of Letters and Science. This article originally appeared in the fall 2020 edition of the college’s magazine and has been updated with the PROSE Award for Walker.