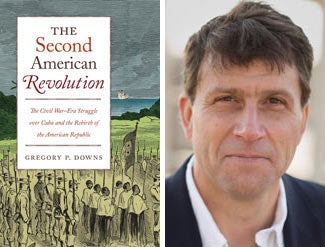 “With graceful and forceful prose, Downs links the mid-19th-century history of the United States to that of the broader Atlantic world — in particular, to Cuba and Mexico in their struggles against European powers to end slavery and establish anti-imperialist democracies.” — Foreign Affairs

Why do Americans call the bloodiest conflict in the nation's history a war rather than a revolution? What does the Civil War have to do with other 19th-century revolutionary movements in Mexico, Spain and especially Cuba? History professor Gregory P. Downs addressed these questions in his book The Second American Revolution, the book he will discuss in a UC Davis Humanities Institute Book Chat this week.

DHI BOOK CHAT: AT A GLANCE

“It wasn’t just a brothers war or a family feud or a restorative war to save the Union as the name Civil War implies,” Downs wrote. “It was also something bigger than that.” Hear the author read from more of this passage.

Downs introduces a range of actors not often considered as central to the conflict but clearly engaged in broader questions and acts they regarded as revolutionary. This expansive canvas allows Downs to describe a broad and world-shaking war with implications far greater than often recognized.

Those implications transformed the U.S. Constitution and reshaped a world order, as political and economic systems grounded in slavery and empire clashed with the democratic process of republican forms of government. And it spilled over national boundaries, tying the United States together with Cuba, Spain, Mexico, Britain and France in a struggle over the future of slavery and of republics.