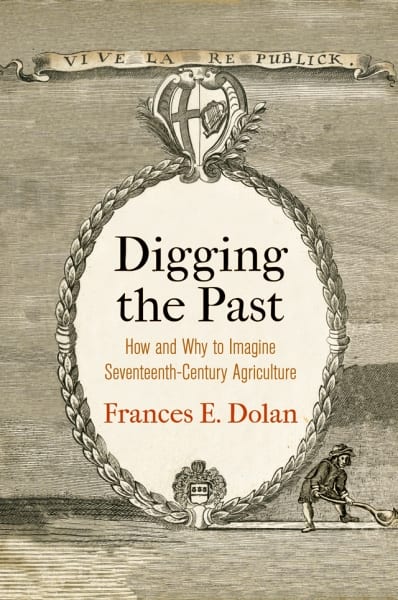 “She makes us welcome the difficult task of thinking harder about everything from plows to manure — and not as odd or quaint digressions, but as things surprisingly central to early modern and current conceptions of culture.” — Leah Knight, author of “Reading Green in Early Modern England”

Digging into writings and figurations and more on 17th-century agriculture, Fran Dolan shows in her new book how agricultural practices of that era are relevant to today. Or, as she put it in a recent blog post, “how the 17th century continues to shape both hands-on practice and popular anglophone ways of imagining and describing what farming should be and do.”

Dolan performed a good deal of her research using rare books in the UC Davis Library’s Archives and Special Collections, according to a library news story. Her book features images drawn from three of those volumes:

According to the publisher, Dolan builds on and connects histories of food and work, literary criticism of the pastoral and georgic, histories of elite and vernacular science, and histories of reading and writing practices, among other areas of inquiry, to offer “fine-grained case studies” of agricultural projects heralded as innovations both in the 17th century and in our own time.

In her blog post, Dolan talks about drawing from Blith’s book, The English Improver Improved, in which he “elaborates on the initiatives that interest me, including planting green manures, composting and other forms of soil amendment, cultivating hedgerows, and eating and drinking ‘local.’”

“Promoted as innovations then, they are once again prominent alternative or sustainable agriculture projects,” she said. “On these topics, past and present can speak to one another.”

Indeed, as she tracks figurations, such as feeding the hungry earth or seeing wine as the “blood of the grape,” across time and place, she shows how “our imaginations and figural language are informed by the 17th century,” as she put it in her blog post.

Says the publisher: “This book approaches the 17th century, in its failed proposals and successful ventures, as a resource for imagining the future of agriculture in fruitful ways. It invites both specialists and nonspecialists to see and appreciate the period from the ground up.”