You Say You Want a Transportation Revolution? How About Three of Them?

Three transportation revolutions are in sight, and together, they could help reduce traffic, improve livability, eventually save trillions of dollars each year, and reduce urban transportation carbon dioxide emissions by 80 percent or more worldwide by 2050. That’s according to a report released today from the University of California, Davis, and the New York-based nonprofit Institute for Transportation & Development Policy.

Compared to a business-as-usual case in 2050, a shared, electric and driverless transportation system could:

Electrified automation without widespread vehicle sharing could save significant energy and emissions, mostly after 2030, but only if the world’s electricity production is decarbonized by 2050.

But to receive the most benefit from these revolutions, the report says the most critical component is something most preschoolers know: Sharing is caring.

The report determined that shared mobility is the third and vital piece that could move global transportation into a future that not only saves energy and emissions but also decongests highways, frees up parking lots for other urban uses, cuts transportation costs, and improves walkability and livability.

“When it comes to cars, what we learned early in life still holds true — sharing makes everything better,” said lead author Lewis Fulton, a co-director at the Sustainable Transportation Energy Pathways, or STEPS, program of the UC Davis Institute of Transportation Studies. “All the futuristic automotive technology being developed could make our cities more livable and the air more breathable — but only if we take sharing seriously.” 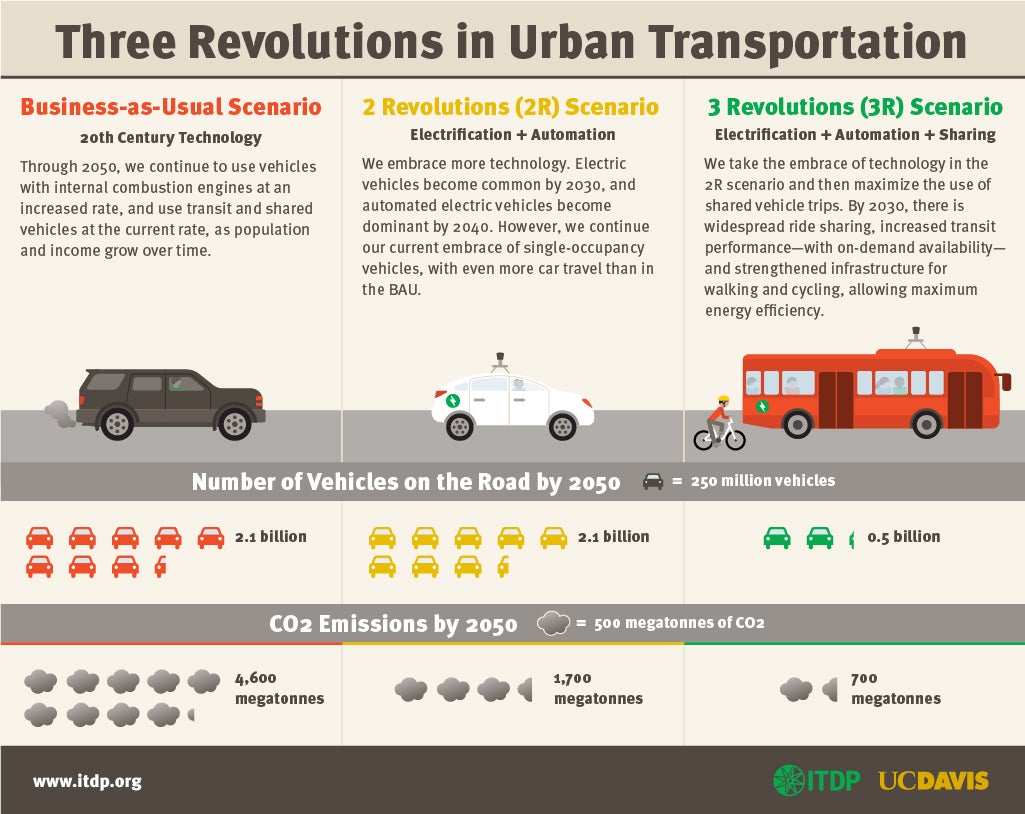 The different global regions vary considerably in their starting points. For example, the United States is highly car-dependent, whereas India’s challenge will be to preserve and enhance shared mobility options they already have. Yet, across the globe, the researchers found the 3 Revolutions, or 3R, scenario to hold the most environmental and societal benefit.

Potential pitfalls of not sharing

Without a concurrent shift away from private vehicle ownership and toward ride sharing, the potential for electric, autonomous vehicles to reduce traffic and sprawl are severely limited, and CO2 reductions will be significantly less than with sharing, the report says.

Electrification is also very important. The report estimates that an autonomous vehicle world without electrification or trip sharing would not cut carbon dioxide emissions at all, and might increase vehicle travel by 15 to 20 percent.

“The findings point out that urban transportation has to evolve beyond single-occupancy vehicles and a single HOV lane,” said Jacob Mason, transport research and evaluation manager at ITDP. “If passenger vehicles do not become predominantly shared by 2050, our cities will continue to be choked by congestion, and defined by sprawling land development and the massive emissions this system generates. Instead, the urban residents of tomorrow should ride electric, automated, and shared vehicles into a cleaner and healthier future.”

The road to achieving emissions targets

The report, “Three Revolutions in Urban Transportation,” comes the week before an international climate change meeting begins in Bonn, Germany. The climate talks will focus on implementing the 2015 Paris Agreement, which targets a 2 degree Celsius or lower cap to an overall temperature change from global warming. This target requires all nations to cut their carbon dioxide emissions dramatically by 2050. The authors note that the “3R” scenario would meet that benchmark for cities, and possibly go further.

The authors recognize that bringing about these revolutions won’t be easy. The report outlines needed policies, and says unprecedented levels of policy support and coordination are needed at the local, state and national levels.

The report assesses policies including those that incentivize widespread adoption of electric and driverless cars, as well as support for ride sharing, public and active transport, and land-use planning that helps shorten most vehicle trips. Such policies could consider fees tied to vehicle CO2 emissions, vehicle occupancy, and possible restrictions or heavy charges on private ownership of autonomous vehicles, along with strong disincentives for zero-occupant trips. Bicycle and e-bike sharing systems also need to be encouraged along with transit system innovations.