The trees on the Quad are once again bedecked in yellow ribbons in a tribute to veterans and Veterans Day (Nov. 11). 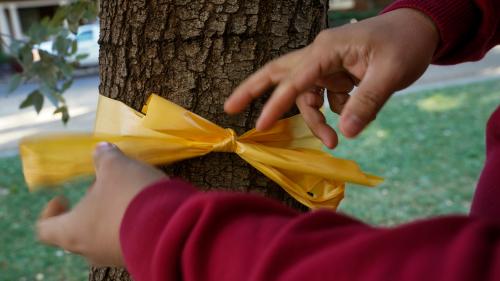 A student veteran organized the first display 12 years ago, using yellow ribbons tied around the tree trunks to raise awareness of Veterans Day, just like military families use yellow ribbons around trees to remind of their loved ones in the service.

The Veterans Success Center continues the project, which is part of the campus’s Veterans Week. Other events this year include a meet-up of the UC Davis veterans community for coffee and doughnuts, Wednesday (Nov. 9), and the UC Davis Veterans Luncheon, Thursday (Nov. 10). Contact the center for more information: 530-752-2020 or vaoffice@ucdavis.edu.

Felipe Grimaldo set the yellow-ribbon tradition in motion in 2011 to show the campus that Veterans Day is more than a day off or a day of no school — that it is a day to honor the men and women whom the ribbons call to mind.

Grimaldo had served in the Marine Corps, including two tours in Iraq, before enrolling at UC Davis.

“I’m glad to know that this event is still ongoing,” Grimaldo said by email Monday. He graduated in 2013 with a Bachelor of Arts degree in political science (public service emphasis) and works today as an associate executive director of the Fresno Teachers Association.

In honor of Veterans Day, Chancellor Gary S. May will share a bit of his own family history in this week’s episode of Thursday Thoughts, recorded at the Veterans Success Center. He will discuss his great-uncle, Isaac James Wilford Sr. — his “Uncle Ike” — who was born in Alexandria, Louisiana, in 1916.

Wilford served as an aircraft radio repairman in the Army Air Forces during World War II, attached to the 99th Pursuit Squadron, which was the first group of Black pilots in the U.S. military. The 99th merged with other groups that collectively became known as the Tuskegee Airmen, who earned accolades for breaking barriers within the military.

He was among the Tuskegee Airmen to receive the Congressional Gold Medal in 2007 — something that May said makes his entire family proud to this day.

Wilford died the following year, and an obituary published in the St. Louis American recalled his accomplishments and personality.

“Isaac was a lively spirit with an infectious laugh that will be missed,” the obituary stated. “As the patriarch leader of his family, he gave ample doses of wisdom that have served those he loved through life’s journey.”