By Dateline Staff on August 24, 2020 in University

Updated 8:15 a.m. Aug. 24: The LNU Lightning Complex, which burned four UC Davis natural reserves, had been 22 percent contained as of this morning, according to Cal Fire. The fires had covered 350,000 acres across five counties.

UC Davis properties account for half of the eight in the UC Natural Reserve System that have been burned or threatened by wildfires in Northern and Central California over the last week.

As of this morning (Aug. 23), flames had consumed an untold number of acres of grassland, forest, chaparral and other natural habitats, and destroyed nine structures on UC reserves. All of the structural losses occurred at UC Davis’ Quail Ridge at the south end of Lake Berryessa, where flames leveled the home of the reserve’s director, Shane Waddell, and eight tent cabins used by visiting classes.

“Wildfires are one of the natural processes that define California’s ecosystems, but enduring so many large, catastrophic fires at the same time is unprecedented for the NRS,” said Peggy Fiedler, executive director of the UC Natural Reserve System.

Jeffrey Clary, associate director of UC Davis Natural Reserves, said: “The losses were terrible this time, especially for Shane and his family. We’re relieved and thankful that our evacuation and communication plans kept everyone safe.”

Quail Ridge, Stebbins Cold Canyon and the Cahill Riparian Preserve are all located near Lake Berryessa’s Monticello Dam west of Davis, and McLaughlin Natural Reserve lies between Lake Berryessa and Clear Lake. Stebbins is a popular hiking venue, while access to the other reserves is generally limited to researchers.

“Our reserve managers and stewards have been absolutely heroic in their efforts to save life and property,” Fiedler said in a story posted Saturday (Aug. 22) by the UC Natural Reserve System. “We’re so grateful for their fire management expertise and dedication, which have minimized property and kept everyone safe.”

Among them, Shane Waddell, director of the 1,010-acre Quail Ridge Reserve, whose family evacuated to Davis at about 5:30 p.m. Tuesday (Aug. 18) after losing power at their home. Waddell stayed behind to monitor the fire for the next few hours.

“Once the neighboring peninsula’s ridgeline was breached and the fire started down towards Quail, I knew it would be necessary to completely evacuate,” Waddell said. “I decided to leave around 9:30 p.m. I was going up to the field station to grab a couple last things, but when I got to the main gate, flames were coming up the ridgeline onto the reserve.”

Even so, Waddell remained long enough to tell neighbors on the Quail Ridge peninsula it was time to depart for their own safety.

“I believe this first wave of fire took my house but spared the rest of the reserve. However, the fire shifted over the next two days and consumed most of the peninsula,” he said.

With firefighters stretched thin all over the state, there were none on hand to defend Quail Ridge.

The fire that tore through the Quail Ridge Reserve is among multiple fires that make up what Cal Fire has named the LNU Lightning Complex, which, as of 7:34 a.m. today had covered 350,030 acres across five counties — Lake, Napa, Solano, Sonoma and Yolo — and was 22 percent contained.

The LNU complex also burned over the 258-acre Stebbins Cold Canyon and its nearby annex, the 200-acre Cahill Riparian Preserve. This area last burned in the 2015 Wragg Fire, and repairs at Stebbins since then included an entry kiosk and trail improvements. Staff had not been able to get in for a thorough assessment of the newest damage — so the reserve is off-limits for the foreseeable future.

“The beginnings of the Stebbins fire didn’t seem as intense or fast-moving as last time ... so we can hope that there are more pockets of less severe burn,” said Sarah Oktay, reserve director.

Fire pinned down directors Cathy Koehler and Paul Aigner for a time at this reserve at the north end of the LNU Lightning Complex, but they found relative safety amid the reserve’s main facilities, surrounded by large swaths of tarmac and gravel.

“It is therefore one of the safest places in the area to be in times of fire,” Clary said. “As they have done in the past, Paul and Cathy are opening this part of the reserve to neighbors whose homes put them at greater risk.”

The LNU fire marks the third time the McLaughlin reserve has burned in five years.

“Paul Aigner worked with Barrick Mine staff (the site was a gold mine prior to become part of the UC Natural Reserve System) and first responders to create fire breaks to guide fires away from sensitive areas,” Clary said.

The reserve consists of nearly 7,000 acres of grassland, oak woodland and chaparral. Small fires continue to simmer on reserve lands but are thought to be unlikely to pose serious future danger.

“Although significant portions of the natural lands there burned, major facilities and research projects were unscathed,” Clary said. “We lost one small bridge on one of the internal roads.” 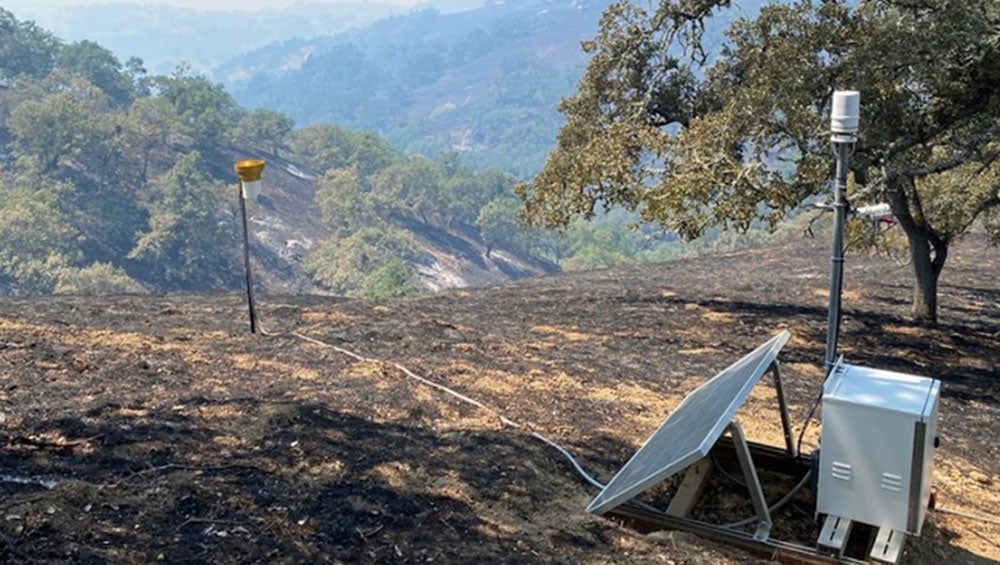