His Legacy Continues With 24 Works Given on His 101st Birthday

The death of University of California, Davis, Professor Emeritus Wayne Thiebaud on Dec. 25 brought an outpouring of memories and tributes, critical acclaim for the artist’s remarkable life and career, and news of a significant gift to UC Davis.

“His brilliance, talent, warmth and generosity leave a legacy that will live on and enrich our campus and the world for generations to come,” the university said in a Dec. 26 statement.

Chancellor Gary S. May added: “Wayne Thiebaud had a profound and lasting influence on our university, but his legacy transcends UC Davis.” Gov. Gavin Newsom, in a statement, called Thiebaud “the pride of California and a great gift to the world.”

Thiebaud died at his Sacramento home a month and a half after his 101st birthday, following a year that saw multiple exhibitions of his work, including shows at the Crocker Art Museum in Sacramento, the Laguna Art Museum in Laguna Beach and the Jan Shrem and Maria Manetti Shrem Museum of Art at UC Davis. The Manetti Shrem Museum exhibition, “Wayne Thiebaud Influencer: A New Generation” (June 3-Nov. 12, 2021) explored the longtime art professor’s profound influence on 19 contemporary artists, including former students, in celebration of his centennial year. That exhibition is available to view in part on the museum’s website.

Current and future generations of students and scholars will continue to be able to study and draw inspiration from his art. Rachel Teagle, founding director of the Manetti Shrem Museum, announced at the museum’s annual fundraising gala Nov. 13 a gift of 24 Thiebaud artworks from the Wayne Thiebaud Foundation to the university’s Fine Arts Collection The foundation works with arts and cultural centers across the world to share Thiebaud’s creations with the public, and is run by Thiebaud’s son, Matt Bult, who serves as president.

Proceeds from the evening went toward a new Wayne Thiebaud Legacy Fund established to support the Manetti Shrem Museum’s education programs and ensure access for future generations. Learn more about the fund.

“Keeping education, scholarship and hands-on art-making as the heartbeat of our museum is what the Wayne Thiebaud Legacy Fund is all about,” Teagle said.

In a video shown at the event, Thiebaud talked with Teagle about the recent exhibition and the unique dynamic of the fledgling UC Davis art department he joined in 1960

‘Painter of the everyday’

Around the world, obituaries and appreciations lauded the artist whose works connected with so many. The New York Times dubbed him a “painter of the everyday” whose “lush, dreamy landscapes and luminous pictures of hot dogs, deli counters, marching band majorettes and other charmed relics of midcentury Americana were complex meditations on life and painting.”

The San Francisco Chronicle and The Sacramento Bee took a more regional perspective, tracing the trajectory of Thiebaud’s career and deep roots in the Sacramento area. 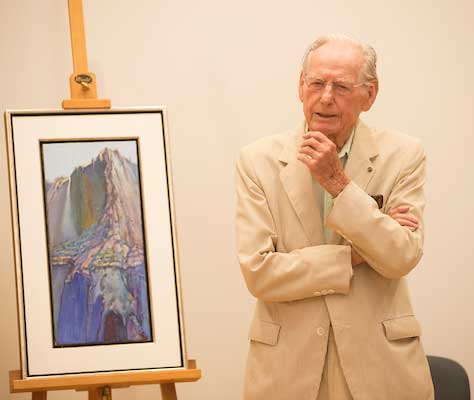 Wayne Thiebaud joined the UC Davis Department of Art in 1960 and retired in 1990, then continued to teach on an unpaid basis until 2002. During his 42 years at UC Davis, his contributions as artist and teacher helped to shape the university.

His awards and honors include:

“He was recruited away from Sacramento City College to UC Davis by founding department chair Richard L. Nelson, who stole him away by promising him a roll of canvas as thick as the trunk of a large tree on the campus’ grounds,” The Bee wrote.

Vonn Cummings Sumner (’98, M.F.A. ’00), whose comic strip-inspired Krazy Kat works were shown in “Wayne Thiebaud Influencer: A New Generation,” posted two works on Instagram and a tribute to his longtime mentor and friend. The arts blog Cultbytes published a conversation between Sumner and Thiebaud about their shared affection for the Krazy Kat character. It begins with Thiebaud asking, “How did we get into this Krazy business in the first place?”

Jeremy Stone, a longtime art advisor, curator and appraiser whose father was New York gallery owner Allan Stone, recounts sitting for a portrait by Thiebaud as a teenager. She did not see the work for 30 years, and had an epiphany while listening to a keynote lecture titled “The Delirious Sorrow of Cheerful Things: The Art of Wayne Thiebaud” by Stanford art scholar and professor Alexander Nemerov at the Thiebaud Study Day held in conjunction with the Manetti Shrem Museum’s 2018 Thiebaud exhibition.

“He confirmed that my sad little portrait, ‘Girl in White’ (1975-76), was not unlike the Eakins portrait of Maud Cook that Nemerov showed at the lecture,” Stone wrote in the San Francisco Examiner. “‘You are in good company,’ he assured me.”

In discussing Thiebaud on Capitol Public Radio’s Insight program Jan. 3, Teagle made the point that despite the many awards the art world and other entities had bestowed upon him throughout his career, the contributor note for his frequent New Yorker covers simply read, “Wayne Thiebaud is a professor emeritus of art at the University of California, Davis.”