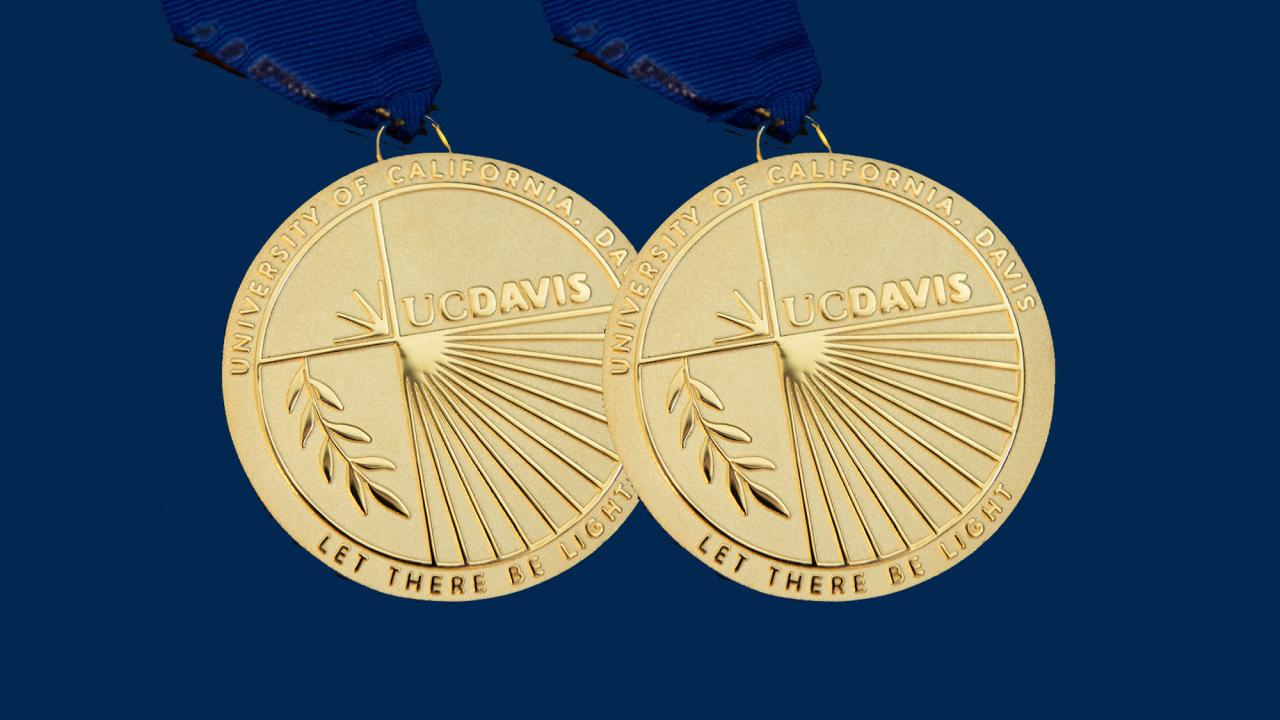 UC Davis Medals will be presented this spring to two alumni couples — Jacque and Wayne Bartholomew, and Pam Rohrich and Karl Gerdes — each pair having met as students and committing not only to each other but their alma mater.

The UC Davis Medal recognizes “extraordinary contributions that embody the campus’ Vision of Excellence.” Winners inspire and support the success of students, faculty, staff and alumni, and foster a bold and innovative spirit in teaching, research and public service.

“Jacque and Wayne Bartholomew, Pam Rohrich and Karl Gerdes exemplify Aggie spirit in action and are truly deserving of UC Davis’ highest honor,” said Chancellor Gary S. May. “Their many years of service, expertise and philanthropy have elevated UC Davis to greater heights, benefiting student scholarships, UC Davis Health, the arts, Athletics, the Arboretum and so much more.”

Jacque Bartholomew, who studied sociology, and Wayne Bartholomew, an economics alumnus, met and married as undergraduates. They graduated in 1964. Wayne went on to earned a Juris Doctor degree from the School of Law in 1971.

The Bartholomews have been giving back to the university ever since. They have donated to more than 50 initiatives, programs, departments and colleges. To name a few, the Bartholomews have supported Intercollegiate Athletics, UC Davis Health, the arts, the Arboretum and their respective areas of study.

“We didn’t have the children that we had planned on so we decided the university is where we wanted to give back in time and in money,” said Jacque, who has been the first woman to lead several campus organizations: the Cal Aggie Alumni Association, or CAAA, and the Davis Chancellor’s Club and UC Davis Library Associates.

Together, Jacque and Wayne have served on nearly 20 UC Davis volunteer committees and are involved in 13 giving societies on campus including the Leadership Giving Society’s Chancellor's Laureates group — donors who have given $1 million or more to the university.

“We hope that through our contributions, our campus will continue to stand out and excel in the academic world,” Jacque said. “Both of us are survivors of cancer, and, thanks to UC Davis Health, our lives have been saved a number of times, allowing us to continue our support to UC Davis.”

Jacque spent her 41-year career at Wells Fargo Bank, where she retired as a vice president and manager. Wayne served in the military from 1966 to 1969 and spent most of his career as a business consultant and investor.

Individually, they each received the Cal Aggie Alumni Association’s Jerry Fielder Memorial Award — Jacque in 1990 and Wayne in 1996 — for their service to the university, and they shared the 2010 Charles J. Soderquist Award for volunteer and philanthropic leadership.

This year’s recognition, they say, is especially meaningful.

“Receiving the UC Davis Medal is an honor that will stand out in our lives. We humbly receive it with open arms and heart,” Jacque said. “We would like to thank the university for recognizing our service and leadership.”

Rohrich and Gerdes credit their Aggie educations with helping them launch their careers in veterinary medicine and engineering. Pam earned a master’s degree in psychology in 1974 and Doctorate in Veterinary Medicine in 1983. Karl did his graduate studies in chemical engineering, earning a master’s in 1973 and Ph.D. in 1984.

“UC Davis gave us our careers, and has given us friends, community, entertainment, food for thought, and just played a big role in who we are,” said Pam, who spent her career as a veterinarian working with the East Bay SPCA in Oakland.

In addition to supporting their respective colleges, the couple has invested in Intercollegiate Athletics, CAAA, the arts and student scholarships. They have been active members of the Davis Chancellor’s Club since 1993.

Karl is chair of the Davis Chancellor’s Club, in addition to serving on the UC Davis Foundation Board and Global Campaign Leadership Council. He has also served two terms on the CAAA board of directors. He was recognized with the Distinguished Engineering Alumni Medal in 1999 for professional accomplishments and service to the College of Engineering, and he was awarded CAAA’s Jerry W. Fielder Award in 2003.

“We hope our gifts will make education accessible to future students and allow them to have the opportunity to establish their life and career,” Karl said. Pam added that they would feel incredibly rewarded if they could help just one person fulfill their potential.

Karl spent 40 years as a technical specialist for Chevron and served 36 years on the research committee of the trade organization GPA Midstream, the association of the natural gas processing industry, chairing it from 2008 until he retired from the association in 2021. Karl was recognized with the GPA Midstream Lifetime Achievement Award in 2018.

The UC Davis Medal announcement came as a surprise to the now-retired couple.

“When I got the phone call from Chancellor May, I was gobsmacked — just floored,” Karl said. “It's incredibly humbling to be named among the list of people who have received this recognition.

“We have happily engaged with and supported the university and hope to do so for many more years to come, hopefully inspiring students coming out to be able to pay it forward when they have the opportunity.”

Ashley Han is a communications specialist in the Office of Development and Alumni Relations, She can be reached at 530-754-2047 or aghan@ucdavis.edu.