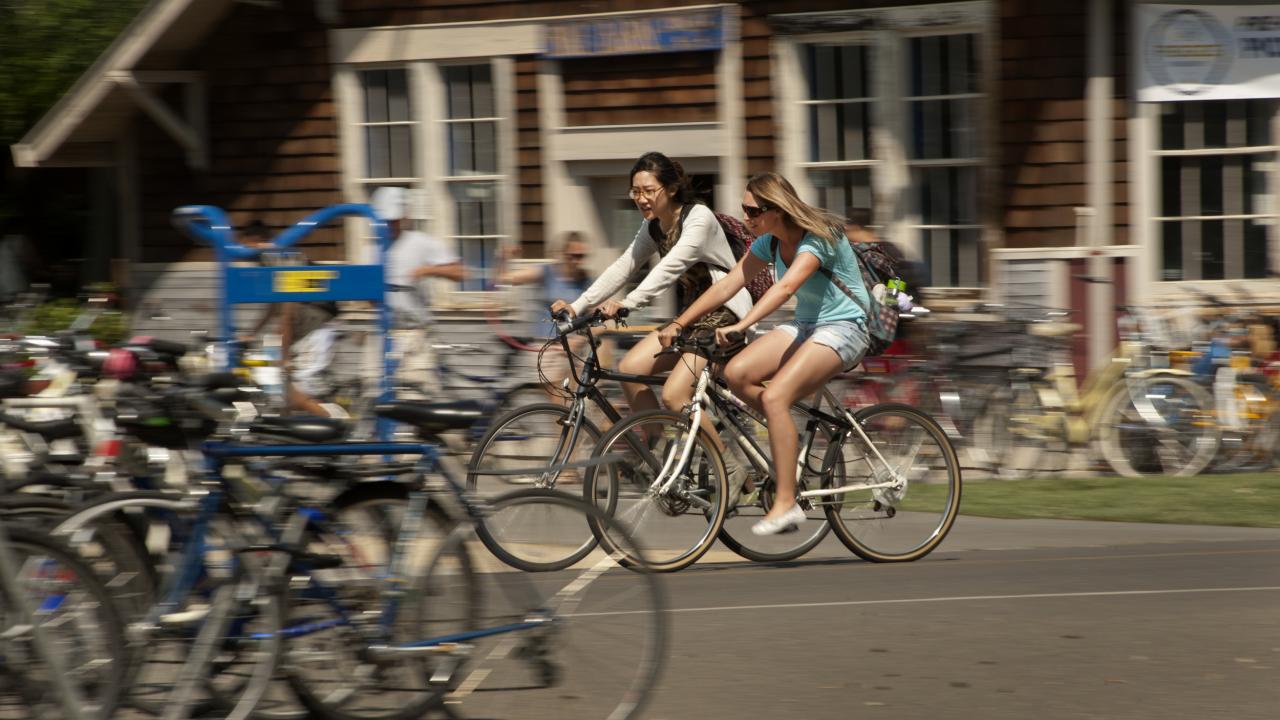 Making the streets safer for cyclists and promoting cycling for all are goals of the International Cycling Safety Conference, to be held Sept. 21-22 at the University of California, Davis, Conference Center. It is the first time that the conference has been held in the U.S. and appropriately enough, it’s coming to the nation’s premier cycling city.

“It’s a highly interdisciplinary group of people and we hope that the conference will promote interaction between the different fields,” said Jason Moore, assistant teaching professor of mechanical and aerospace engineering at UC Davis and a member of the organizing committee. Other organizers are professors Debbie Niemeier, Department of Civil and Environmental Engineering, and Susan Handy, Department of Environmental Science and Policy; and Mont Hubbard, professor emeritus of mechanical and aerospace engineering.

While bicycle use in the U.S. has been growing, it lags well behind that in many other countries, with only about 1 percent of work or leisure trips taken by bicycle. That compares to rates as high as 30 percent in the most cycle-friendly countries, such as the Netherlands.

The first human-powered, two-wheeled vehicle is credited to German inventor Karl von Drais in 1817. His “running machine,” or velocipede, had two wheels, a steerable front wheel and a saddle but no pedals, the rider pushing off the ground with their legs instead.

Bicycle lanes — traffic lanes dedicated to the use of bicycles — were proposed in Davis in 1965. The following year, bike lane advocates Norm Woodbury and Maynard Skinner were elected to the city council, and Gov. Ronald Reagan signed legislation authorizing cities to create lanes. The first dedicated bicycle lane in Davis opened in July 1967 on Eighth Street between A Street and Sycamore Lane. Davis now has over 100 miles of dedicated bicycle lanes and paths within the 11 square miles of the city.

Bicycle crashes, however, have been rising sharply in the U.S. Fatalities from bicycle crashes rose 12 percent in 2015, according to a recent report by the Governors Highway Safety Association. Many collisions occur because a motorist fails to see the bicyclists.

“We have a horrible rate of bicycle crashes,” Moore said. The conference will explore how street design, vehicle design and changing transportation culture can contribute to improving safety.

Smart cities and helmet use

A hot topic of the conference will be how to exploit the data streams becoming available from vehicles, street sensors and mobile devices to make cities “smart,” Moore said.

“People are just starting to think about how we can use this data to identify problem areas and make cities safer for bicycles,” he said.

It’s an area that can combine traditional civil engineering, cycling safety, sensors and data technology. Niemeier, for example, is experimenting with bicycles that can automatically collect data on the state of city bicycle paths as their users ride around town.

Sessions and workshops will also address the use of bicycle helmets, and how much priority should be given to enforcing helmet use compared to other measures. Helmets provide valuable protection in the event of a crash, but there is also an argument that much more can be done to prevent crashes happening in the first place, Moore said.

Davis is America’s premier bicycle city, with platinum status as a Bicycle Friendly Community from the League of American Bicyclists, and UC Davis is a platinum Bicycle Friendly University. For 50 years, the city and the university have collaborated on bicycle-friendly development. More than one-fifth (22 percent) of Davis residents regularly ride their bicycles to work or study, and 45 percent of people traveling to the UC Davis campus arrive by bicycle.

Major sponsors of the conference include the National Center for Sustainable Transportation, the UC Davis Institute for Transportation Studies, Accell Group, Iteris Inc., the California Bicycle Competition and the U.S. Bicycling Hall of Fame.