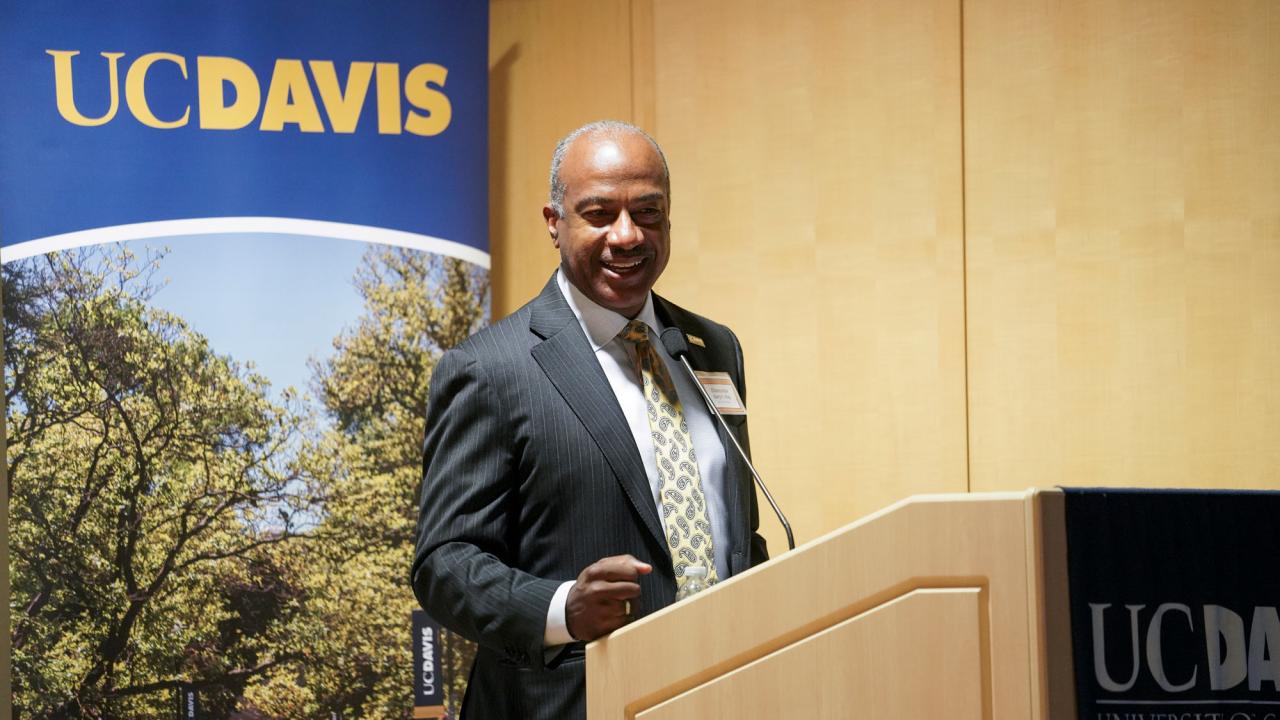 Chancellor Gary S. May of the University of California, Davis, today (June 1) moved up to chair of the board of directors of the Association of Public and Land-Grant Universities, or APLU, comprising 244 public research universities, land-grant institutions, state university systems and affiliated organizations.

And, on July 1, he will begin a one-year term as chair of the board of directors of the Big West athletic conference, which counts a majority of UC Davis teams as members.

Elected to the APLU’s executive committee in 2019, May had been serving as chair-elect in 2021-22, due to succeed Rebecca Blank as chair in November. But she left office early, after stepping down as chancellor of the University of Wisconsin-Madison to become president of Northwestern University, a private institution, in July.

May will fill out Blank’s term and then continue as chair for another year, until Nov. 13, 2023.

“I’m honored to step into this role and represent higher education leaders in service to APLU’s mission,” May said. “I’m looking forward to working with the board of directors to improve opportunities for student access and success, interdisciplinary research, economic development and public engagement across all of APLU’s member institutions.”

The board provides oversight and direction for APLU’s work and is charged with setting membership and governing policies for the association. Board members work to make public institutions of higher education more effective in driving equitable student success, fostering research and innovation to meet societal needs, and building prosperous, equitable, and vibrant communities locally and globally.

“We’re very pleased to have Gary May as chair of the APLU board of directors,” APLU President Peter McPherson said. “Chancellor May is an exceptional public university leader and brings deep experience advancing the positive impact of public universities to serve all communities.

“As he takes the helm of the APLU board, we’re excited to have his leadership as the association works to promote equitable student success, cutting-edge research and prosperous communities.”

The APLU is a research, policy and advocacy organization dedicated to strengthening and advancing the work of public universities in the United States, Canada and Mexico.

Chancellor May has been serving as chair-elect of the board since his election at the Big West’s spring meeting a year ago. In moving up to chair, he will succeed Framroze M. Virjee, president of California State University, Fullerton.

At this year’s spring meeting, held May 24-26 in San Diego, the conference elected Lynnette Zelezny, president of California State University, Bakersfield, as the new chair-elect, to succeed May in 2023-24. She has been CSU Bakersfield’s president since July 2018, the first woman to hold the office.

“Gary May and Lynnette Zelezny are emblematic of the board’s strong commitment to athletic and academic excellence,” Dan Butterly, Big West commissioner, said in a news release. “Their strong leadership will be critical as the Big West navigates the transformational change taking place within the NCAA.”

They have a shared goal of empowering every student-athlete in competition and in life and uniting their university communities through championship experiences.