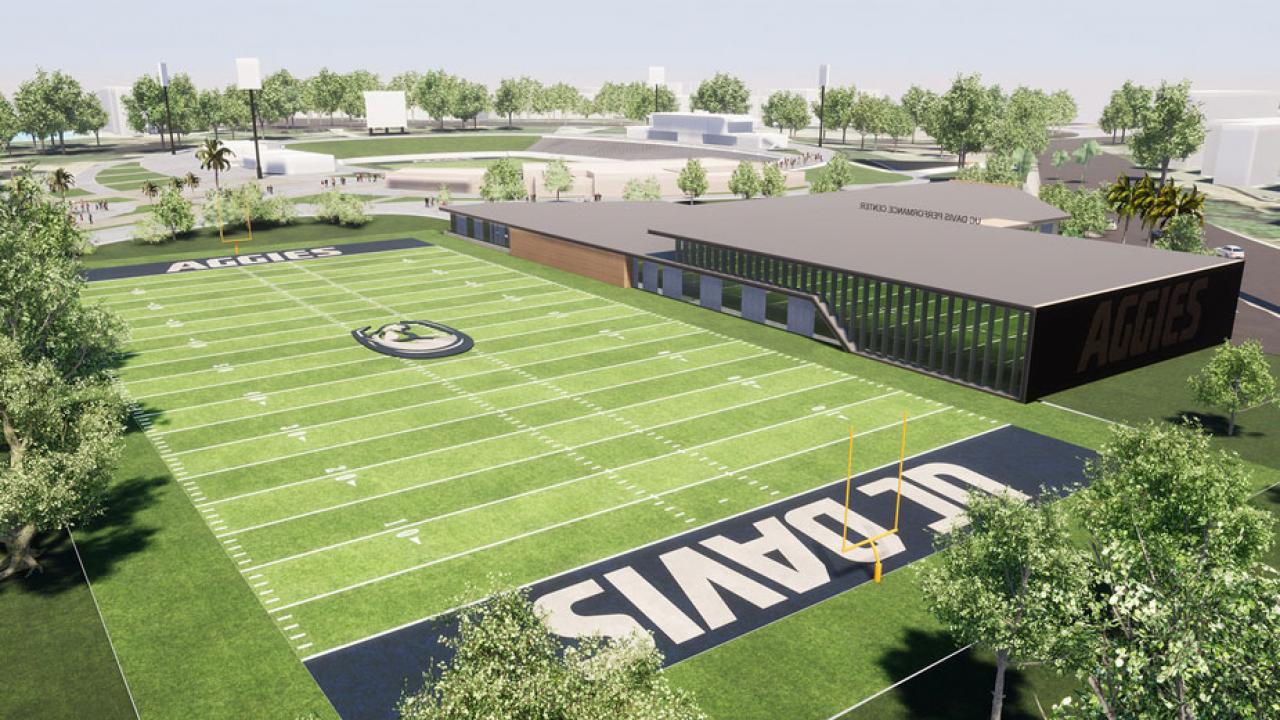 The University of California, Davis, announced today (Nov. 15) that a new landmark student-athlete performance center will be built on campus to benefit its intercollegiate athletics teams and other campus programs.

The development of the new center and expansion of health care services in Davis is part of a renewed commitment to the health of UC Davis students and the Davis community overall. The UC Davis Student-Athlete Performance Center will include training facilities; a sports medicine center; a home for academic support and the Aggie EVO System; offices for multiple sport programs; and a multipurpose, natural grass practice field.

The project comprises a new building, approximately 38,000 square feet in size, adjacent to Aggie Stadium at its northeast corner, at the corner of Hutchison Drive and La Rue Road; the renovation of 16,000 square feet of space in the Bob Foster Team Center, on the stadium’s north perimeter; and a practice field adjacent to the new building.

The building site serves now as Tailgate Field — but the tailgating tradition will continue. Several new options for tailgating are being evaluated, and more information will be available for fans in the coming months.

“This collaboration between UC Davis Athletics and UC Davis Health is a strong example of how we work together for the benefit of our students,” Chancellor Gary S. May said. “I’m proud of the university’s commitment to investing in health care services and sports medicine in Davis.”

Approximately 90 percent of the expected $40 million required for the construction project has been secured from a variety of sources. A generous gift by Bruce and Diane Edwards — the largest in UC Davis Athletics history — served as the lead private contribution. Bruce Edwards is a member of the Class of 1960 who played football and ran track for UC Davis.

Other seven-figure contributions were made by Bruce and Marie West and Mike and Renee Child, devoted supporters of UC Davis who have served in a number of volunteer leadership positions with Intercollegiate Athletics and the UC Davis Foundation. In addition, multiple six-figure gifts were made during the quiet phase of fundraising.

As part of the expanded partnership between UC Davis Athletics and UC Davis Health, Aggie Stadium will be renamed UC Davis Health Stadium on Aug. 1, 2019, for a period of 20 years. UC Davis Health will also become the exclusive health-category advertiser and provider of health care services to student-athletes in the performance center.

In addition, UC Davis Health is evaluating ways to provide additional medical services to students, faculty, staff and the Davis community overall from within the performance center footprint and other Davis community locations.

“We are pleased to partner with our generous donors, UC Davis Health and campus administration to construct a facility that will have a transformational impact,” UC Davis Athletics Director Kevin Blue said. “The Student-Athlete Performance Center will help us meet existing programmatic needs, enhance the quality of services that we are able to provide our student-athletes and further propel the overall upward trajectory of our athletics program.”

David Lubarsky, vice chancellor of UC Davis Human Health Sciences and chief executive officer of UC Davis Health, said: “As the top-ranked health system in the Sacramento area, it’s important that we reaffirm our focus on taking care of our family, including our students, faculty, staff and the Davis community.

“This is the first step toward an increased profile for UC Davis Health on the Davis campus and in the Davis community. We’re going to be expanding our commitment to services on our campus through an enhanced sports medicine practice and other health services, not just for student-athletes, but for students and any active adults in the Davis area.”

The UC Davis Student-Athlete Performance Center will create several ancillary benefits for the university. For example, its multiuse auditorium will be used for undergraduate instruction. The Cowell office building, now occupied by Intercollegiate Athletics staff and coaches, will become available for other university functions, providing much needed office space in the central campus.

In addition, the weight room within the performance center will be made available to UC Davis sport club teams for use outside of Intercollegiate Athletics training hours.

Groundbreaking will be in early 2019. The project will begin with the practice field, and construction of the performance center buildings will begin upon completion of fundraising.

UC Davis Health harnesses the power of an entire university’s nationally-ranked resources and research to tackle the most pressing health care issues facing the world today. UC Davis Health’s clinicians and researchers include partners working in the world’s best School of Veterinary Medicine and the nation’s best College of Agricultural and Environmental Sciences, and in colleges of Biological Sciences and Engineering that are also among the nation’s best — all part of one of the top five “Best Public Universities” in the United States. As the region’s only academic health center, UC Davis Health is focused on discovering and sharing knowledge, and providing the highest quality of care. UC Davis Health is a hub of innovation that encompasses UC Davis Medical Center, School of Medicine and Betty Irene Moore School of Nursing, and Clinical Care Network.

Established during the 2017-18 academic year, the Aggie EVO System is UC Davis Athletics' investment in the primary mission of preparing student-athletes for a successful "launch" after graduation.

Thanks to a collaboration of alumni, university resources, corporate partners, coaches and Student-Athlete Outcomes staff, all Aggies are guided over four years to acquire the skills, knowledge, opportunities and tools to better know and navigate the "World of Work" after graduating from UC Davis. Follow the Aggie EVO system on Twitter and Instagram at @AggieEVO.