The name is derived from “June nineteenth” 1865, the date the Emancipation Proclamation finally took effect in Texas — 2½ years after the order by President Abraham Lincoln had freed enslaved people elsewhere. Freedmen in Texas subsequently began celebrating June 19 annually, and, as they emigrated to other parts of the country, the tradition went with them. Eventually Juneteenth came to represent the end of slavery throughout the country.

June 19 falls on a Saturday this year, so most federal employees were given today off — the first official Juneteenth National Independence Day.

With such short notice for the new holiday, UC in this first year will observe Juneteenth on Monday (June 28), before switching to the federally designated day in subsequent years. Most employees will have the day off (guidance has gone out to managers and supervisors.) Classes have been canceled; the Academic Senate has sent a message to instructors on how course content and scheduling can be adjusted to account for the loss of an instructional day, and instructors will inform students about any additional course changes.

UC Davis Health announced it does not have sufficient time to adjust clinical operations — so they will not change and clinics should not be canceling any patient appointments. More information is available in this article on the UC Davis Health website.

President Drake said federal-holiday status for Juneteenth, also known as Jubilee Day, Liberation Day and Freedom Day, “is an historic moment for our nation — 156 years in the making.”

Slavery persisted in Texas even after the Confederacy surrendered at Appomattox on April 9, 1865, ending the Civil War. Then, about 10 weeks later, on June 19, Maj. Gen. Gordon Granger led his Union troops into Texas to assert the federal government’s authority in announcing all slaves were free.

Thursday, after the bill-signing ceremony at the White House, Chancellor Gary S. May said in a statement that he was moved to see Juneteenth made a federal holiday. “It is a day that African Americans have long celebrated across the nation. ... While it is a day of joy, it is also a reminder of our nation’s history, how far we have come and how far we have to go.”

President Drake said in his message today: “As we approach June 19th, I invite you to join me in reflecting on our nation’s history, the horrors of centuries of bondage and the difficult road from liberation to equality.

“Let us resolve to build a future representing and lifted up by our ideals, our values and our best selves.” 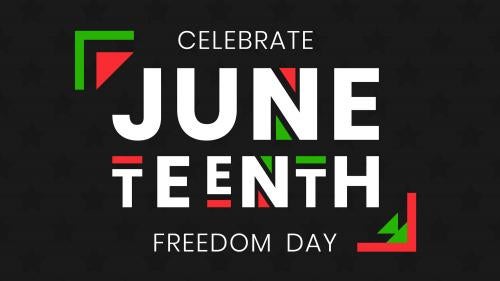