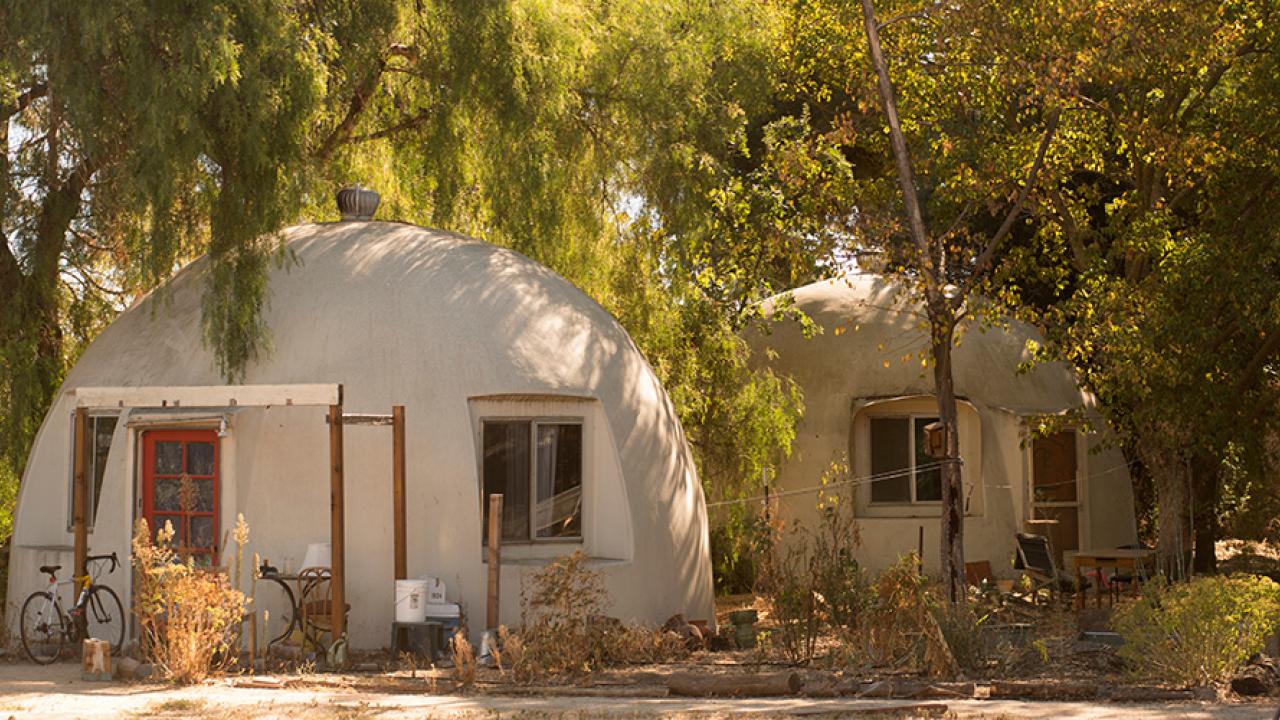 • The prospect of losing the #Domes “broke our hearts,” which is why so many alums helped save the #UCDavis community. ow.ly/i/pDCH

• The #Domes project “reunited a lot of people who love this land and this community” at #UCDavis.

Students are moving back into the “Domes,” a funky, 1970s experiment in communal living and one of the few student-built housing cooperatives in the nation.

Domes 2.0 debuted for the winter quarter, with a physical upgrade well under way and a new vision — and students living in several of the 14 Domes, officially the Baggins End Innovative Housing at UC Davis. The turnabout is the result of a five-year lease that the university signed Dec. 23 with the Solar Community Housing Association, a Davis-based nonprofit organization, to manage the neighborhood.

Last spring, the almost 40-year-old Domes seemed doomed by the need for costly repairs, and the university asked the residents to leave. Then the dialogue intensified on what the Domes mean to the community and to UC Davis.

“It’s an extraordinary place that offers experiential learning opportunities,” said JayLee Tuil, a doctoral student in geography and Domes resident, during a tour of the site.

The hope, Tuil explained, is that Domes 2.0 becomes part of the UC Davis academic mainstream. The plan is to “transition to the academic community” and integrate the community with departments like landscape architecture, environmental design and civil engineering.

“It’s all unknown at this point,” Tuil acknowledged. “But we’ve got five years and a good start to figuring it all out.”

Built on the western edge of campus, Baggins End — the name comes from Bilbo Baggins, a character in J.R.R. Tolkien’s fantasy novel The Hobbit — has been the subject of research, tours and courses through the years. There are organic gardens, chickens, permaculture, composting beds, fruit trees, solar energy, a toolshed and all the building blocks of sustainability — a key academic strength at UC Davis.

To many, the Domes represent a real-world demonstration of how to achieve eco-friendly living, the kind studied in UC Davis labs and discussed in campus classrooms.

One of the new Domes residents is Sheryl Sensenig, who is studying agricultural and environmental education.

“It’s exciting to have a small part in the large community effort to save the Domes and see them reinhabited,” Sensenig said.

In the beginning, the Domes were not meant to last forever — only five years, in fact. Each 450-foot-square dome is constructed of 3 to 4 inches of polyurethane foam covered by a fiberglass shell. The white exterior and thick insulation keeps them cool in the summer and warm in the winter — just like boat hulls made out of the same materials. Typically, one or two students share the units.

But concerns arose last year with a report of degradation of the foam structure within the Domes. University officials and independent inspectors identified numerous structural, health and safety, and fire code issues along with the need for improvements required by the Americans with Disabilities Act.

Simply put, campus officials concluded that the prefabricated huts would be too costly to fix. So, the campus announced last February that it would not reoffer leases when they expired at the end of July. The Domes cooperative, which housed a total of 28 students last year, was vacant by early August.

Domes residents and alumni pressed the university to explore alternatives to shutting down the community, and support poured in from the university community and friends from the broader region.

After the university reached a licensing agreement with the Solar Community Housing Association, UC Davis gave the association the green light to make repairs while the negotiations over the ground lease continued.

One bright new feature is that the Domes will provide full accessibility for disabled people. These repairs are expected to be completed by the end of summer — just in time to celebrate the community’s 40th anniversary.

Mary Hayakawa, executive director of Real Estate Services, led the university’s efforts to negotiate with the Solar Community Housing Association for the lease that allowed the repair work to begin.

“Domes 2.0 proves that when people work together with a positive outlook, and with the energy and enthusiasm of youth, they can achieve anything,” Hayakawa said.

Students moving in are eager to expand the legacy of the Domes. Rent is $395 per student, not a bad deal for a huge slice of community.

Beyond all the challenges and doubts of the last year, the community has a place deep in Tuil’s heart.

“Living here was part of my healing process,” said the graduate student, who was hurt in a trolley accident in 2007.

During her long recovery — and it was not an easy one — she lived in one of the Domes. She found the place and the people inspiring, nurturing, supportive.

“I was changed by this place in ways I'll never forget,” said Tuil, a tear on her cheek.

Clifton B. Parker is the associate editor of UC Davis Magazine and a former editor of Dateline UC Davis. Julia Ann Easley, senior public information representative with the News Service, contributed to this report.