In 30 years in UC Davis communications, Susanne Rockwell, an Aggie alumna, successfully transitioned from print (as editor of the Dateline UC Davis newspaper) to web (developing and editing the UC Davis home page) and social media — all the while supporting her UC Davis colleagues in their work and embracing them as family.

In lieu of flowers, the family suggests that memorial contributions be made to:

Not just her colleagues in the Office of Strategic Communications. But colleagues all over the campus. Colleagues whom she went to lunch with, one, two or three or more at a time, every day.

Rockwell died unexpectedly Monday (Feb. 19) at her Davis home from complications of tongue cancer, at the age of 65. All week long, her work family has been remembering her many contributions to UC Davis communications, and her impact on their lives.

“The campus benefited enormously from her principled practice of community journalism, her recognition — and artful telling — of a darn good story, and her demonstration of just how big a heart, kind a soul and irrepressible a spirit one person can possess,” Stratton said.

Stratton hired Rockwell in 1989 as editor of Dateline and soon found herself as the campus’s primary conduit for information about the budget crisis of the early 1990s. For its coverage of that crisis, Dateline received a national award from the Council for Advancement and Support of Education, or CASE. 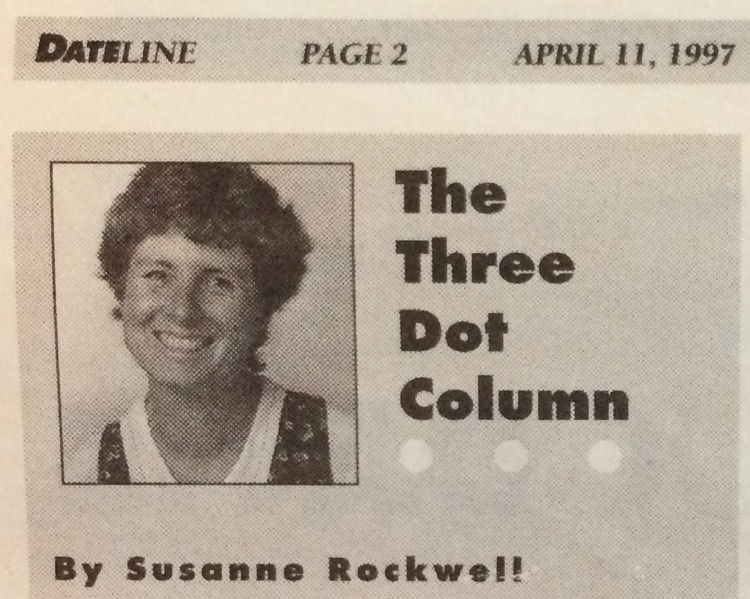 Stratton explained how then-Chancellor Ted Hullar had appointed a committee to advise him on budget cuts. Dateline presented the committee’s proposals, solicited and subsequently published reaction from the campus community, and, finally, carried a report on the budget decisions. “Dateline served a very important role during that very difficult period,” she said.

In 2000, Rockwell began working on the campus’s main website, while also providing communications services to the College of Letters and Science.

Colleagues recall that Rockwell was a fearless early adopter of social media and multimedia, evolving from a comfortable position as an expert print journalist to a far more challenging one as a new practitioner of online journalism. She bridged the sometimes-enormous gap between web developers and information specialists with patience and good humor. She was a leader in helping the university use new media to enhance student safety and strengthen overall communications with its broader audiences.

Most recently, Rockwell launched the “What Can I Do With My Major?” blog, drawing input from the campus community to help students envision the wide array of career options available in various areas of study. Now, just 10 months after its debut, the blog has a robust readership around the world and a regional CASE award.

Just five days before her death, ever promoting her love and esteem for communicators, Rockwell coordinated a blog post titled “How UC Davis Undergraduates Can Become Journalists,” written by a UC Davis alumna now attending the UC Berkeley Graduate School of Journalism.

“She touched so many people at UC Davis through her passion for writing and telling stories. She was often the first to want to learn something — like web development and social media — and then the first to advocate for being innovative.

“On a personal level, Susanne made deep connections with people and never hesitated to share a kind word about a colleague,” Topousis added. “To say we will miss her is an understatement. We will honor her memory and carry her legacy forward.”

Born Susanne Gail Rockwell on Nov. 21, 1952, in Roseville, she spent most of her childhood in Redding near Lake Shasta and the Sacramento River, where she developed a love for Northern California and its environmental riches. At Shasta High School she was active in the marching band, playing the flute and participating one year in the Tournament of Roses Parade.

She graduated from Shasta High School and entered UC Davis in 1970. She signed on as a writer for The California Aggie, UC Davis’ student newspaper, where she met her future husband, Brian Sway, who was the editor. They married on April 10, 1976.

During her junior year, she studied in Spain, an experience that ignited a lifelong passion for travel and an appreciation for learning foreign languages. When her daughters reached school age, she made sure that they were enrolled in Davis’ Spanish immersion program.

She earned two degrees from UC Davis: a bachelor’s in international relations (1974) and a master’s in rhetoric and communication (1996).

As a young journalist, Rockwell first found employment as assistant editor at the Winters Express, where she worked until 1976. She then joined The (Vacaville) Reporter, working there until 1983, when she was hired to manage a staff of 15 writers as the assistant “Showcase” editor at The Sacramento Union, then one of Sacramento’s two daily newspapers.

During her years in newspapering, she was active in the Society of Professional Journalists, serving several years on the local chapter’s governing board.

Rockwell also had an abiding commitment to fostering diversity and accessibility in the campus community. In 1998 she received a UC Davis diversity award for “being ever vigilant in her search for stories” to reflect the variety of people who are critical to the success of the campus, and in 2006 she received an award for her role in redesigning campus websites to make them easier to use by people with visual impairments. She also was an early champion of nonsexist language in communications.

Colleagues note that Rockwell was for nearly three decades the social anchor for her campus department. Even during tumultuous times, she insisted that the university communications group was “family,” and made sure that newcomers were welcomed and veteran staffers acknowledged. She wrote countless, unsolicited award nominations, intent that colleagues receive recognition on campus and through professional organizations.

Rockwell’s daughters, Meagan and Julia, said that she felt it was important to take on challenges outside of her comfort zone. Although she never thought of herself as an athlete or serious runner, in 1999 she enrolled in the Leukemia and Lymphoma Society’s Team in Training program and successfully completed Sacramento’s California International Marathon.

Board member, Rotarian and host

Outside of work, Rockwell served for eight years on the Yolo Basin Foundation board, having a keen interest in supporting wildlife and wetland habitats.

She was a member of the Sunrise Rotary Club of Davis, serving as president in 2013-14. Over the years, she and her husband welcomed seven high school exchange students from Europe, South America and Japan into their home through Rotary Club.

Rockwell and her husband, even while juggling the joys and demands of parenting their two daughters, were tireless hosts, generously opening their home for community fundraising events as well as office retreats, holiday celebrations and retirement parties.

She is survived by her husband, Brian Sway of Davis, and their daughters and their husbands: Julia Sway and Matthew Simpson, and Meagan Sway and Sage Friedman, all of Portland, Maine. She also leaves her brother Robin and sister-in-law Lori Rockwell of Scotts Valley; brother and sister-in-law Andy and Jan Sway of Burbank; sister-in-law Caren Sway of Valencia; and nephews Matthew Rockwell of Scotts Valley, David (and wife Misha) Sway and Daniel Sway of Los Angeles, and Michael Branstetter (and wife Jenna) of Ventura.

She was preceded in death by her parents, Helen Rockwell and Jerry Rockwell, and a brother, Scott Rockwell.

This is adapted from the obituary that appeared Feb. 23 in The Davis Enterprise — an obituary written by two of Rockwell's former colleagues, Pat Bailey and Sylvia Wright.