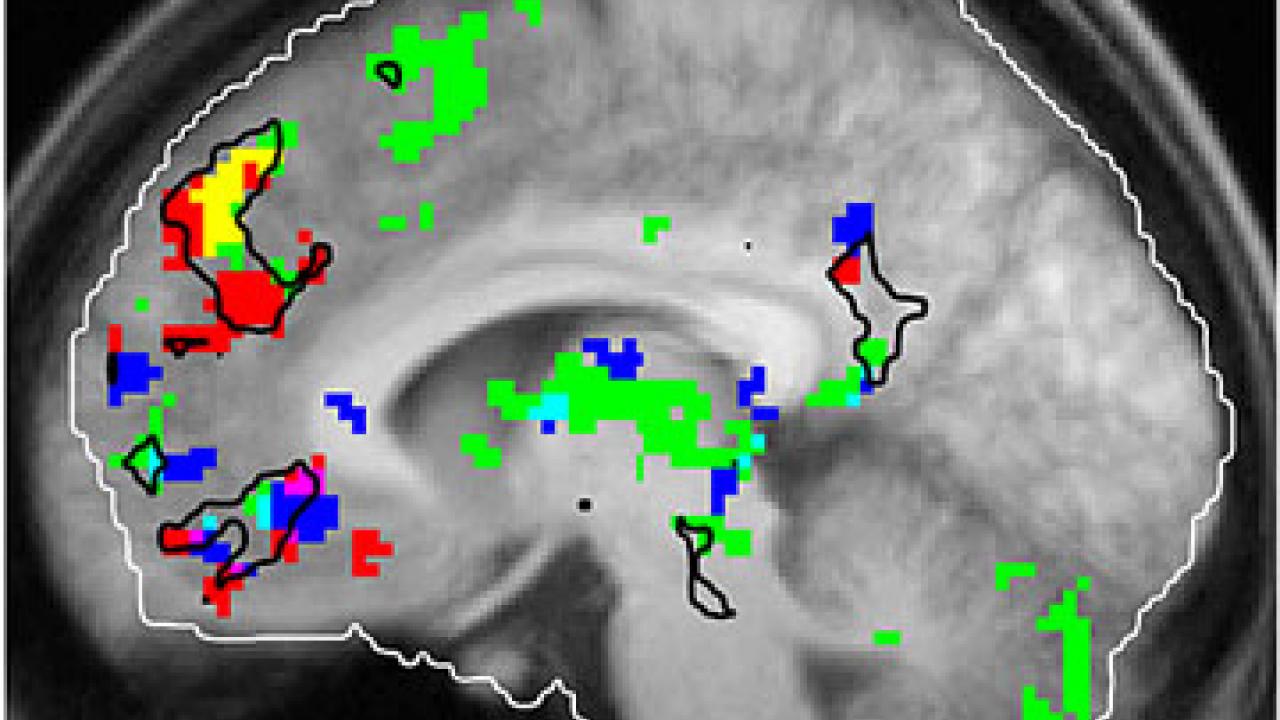 We all know the feeling: a golden oldie comes blaring over the radio and suddenly we’re transported back — to a memorable high-school dance, or to that perfect afternoon on the beach with friends. But what is it about music that can evoke such vivid memories?

By mapping the brain activity of a group of subjects while they listened to music, a researcher at the University of California, Davis, now thinks he has the answer: The region of the brain where memories of our past are supported and retrieved also serves as a hub that links familiar music, memories and emotion.

The discovery may help to explain why music can elicit strong responses from people with Alzheimer’s disease, said the study’s author, Petr Janata, associate professor of psychology at UC Davis’ Center for Mind and Brain. The hub is located in the medial prefrontal cortex region — right behind the forehead — and one of the last areas of the brain to atrophy over the course of the disease.

“What seems to happen is that a piece of familiar music serves as a soundtrack for a mental movie that starts playing in our head. It calls back memories of a particular person or place, and you might all of a sudden see that person’s face in your mind’s eye,” Janata said. “Now we can see the association between those two things — the music and the memories.”

His study, “The Neural Architecture of Music-Evoked Autobiographical Memories,” will be published online on Feb. 24 in the journal Cerebral Cortex and will appear in the journal’s print version later this year.

Earlier work of Janata’s had documented that music serves as a potent trigger for retrieving memories. In order to learn more about the mechanism behind this phenomenon, he enrolled 13 UC Davis students into a new study.

While his subjects listened to excerpts of 30 different tunes through headphones, Janata recorded their brain activity using functional magnetic resonance imaging, or fMRI. To assure the best chance that students would associate at least some of the tunes with memories from their past, he chose songs randomly from “top 100” charts from years when each subject would have been 8 to 18 years old.

After each excerpt, the student responded to questions about the tune, including whether it was familiar or not, how enjoyable it was, and whether it was associated with any particular incident, episode or memory.

Immediately following the MRI session, students completed a survey about the content and vividness of the memories that each familiar tune had elicited.

The surveys revealed that, on average, a student recognized about 17 of the 30 excerpts, and of these, about 13 were moderately or strongly associated with an autobiographical memory. Moreover, tunes that were linked to the strongest, most salient memories were the ones that evoked the most vivid and emotion-laden responses.

When he took a look at his fMRI images and compared them to these self-reported reactions, Janata discovered that the degree of salience of the memory corresponded to the amount of activity in the upper (dorsal) part of the medial pre-frontal cortex.

While this correlation confirmed Janata’s hypothesis that this brain region links music and memory, it was another discovery that sealed his conclusion.

A lifelong music buff, Janata had earlier created a model for “mapping” the tones of a piece of music as it moves from chord to chord and into and out of major and minor keys. By making tonal maps of each musical excerpt and comparing them to their corresponding brain scans, he discovered that the brain was tracking these tonal progressions in the same region as it was experiencing the memories: in the dorsal part of the medial pre-frontal cortex, as well as in regions immediately adjacent to it. And in this case, too, the stronger the autobiographical memory, the greater the “tracking” activity.

Because memory for autobiographically important music seems to be spared in people with Alzheimer’s disease, Janata said, one of his long-term goals is to use this research to help develop music-based therapy for people with the disease.

“Providing patients with MP3 players and customized playlists,” he speculated, “could prove to be a quality-of-life improvement strategy that would be both effective and economical.”

The work was supported by a Templeton Advanced Research Program grant from the Metanexus Institute.

For 100 years, UC Davis has engaged in teaching, research and public service that matter to California and transform the world. Located close to the state capital, UC Davis has 31,000 students, an annual research budget that exceeds $500 million, a comprehensive health system and 13 specialized research centers. The university offers interdisciplinary graduate study and more than 100 undergraduate majors in four colleges — Agricultural and Environmental Sciences, Biological Sciences, Engineering, and Letters and Science — and advanced degrees from five professional schools: Education, Law, Management, Medicine, and Veterinary Medicine. The UC Davis School of Medicine and UC Davis Medical Center are located on the Sacramento campus near downtown.