It may not have been their first choice, but new graduates were thankful to walk across a stage and celebrate commencement with family members today (June 11).

This story was published Friday (June 11), in the midst a last round of commencements that saw more than 5,800 undergraduate and graduate students recognized for completing their degrees.

“I just felt grateful that we get to have anything in person,” Nicole Johnston, a human development and psychology double major, said as she waited in a line on Hutchison Field to participate in the 8 a.m. processional for undergraduates. “After a long and trying last year of college, I feel grateful that the university was able to put this on.”

Students have felt the impact of the pandemic for more than a year, living with loss and adapting to remote learning, regular COVID-19 screening, face covering requirements and social distancing. But, for at least some graduates, this year’s limited-scale, in-person ceremonies — including 16 that started Wednesday of this week and will continue through Sunday — felt like a glimpse of normalcy.

The campus has not forgotten its 2020 graduates, and is planning an in-person celebration of their commencement with details forthcoming.

Each event is limited to 400 students, each of whom can bring two guests. Grads and their guests must stay in their own “pods” 6 feet apart from others. Four undergraduate processionals were being held today, five more will be held Saturday and three on Sunday. Graduate Studies held two in-person ceremonies Thursday and the Graduate School of Management will hold two in-person ceremonies today.

Students who couldn’t or chose not to attend an in-person ceremony can still celebrate this weekend and beyond with a virtual commencement featuring congratulatory remarks from Gov. Gavin Newsom and First Partner Jennifer Siebel Newsom, UC President Michael V. Drake, Chancellor Gary S. May and Provost and Executive Vice Chancellor Mary Croughan.

They all praised the Class of 2021 for its resilience.

“Graduating from college is an incredible achievement and a milestone in your life,” May said. “It’s something to be proud of during a normal year, but you accomplished this during the most challenging time our country has ever seen.”

Lisa Borsack traveled from Encinitas with her husband, Ed Borsack, for today’s 8 a.m. processional for undergrads. It was their second time watching one of their children graduate from Davis — this time, their youngest, Summer Borsack, earned a degree in human development. Lisa Borsack said she appreciated the streamlined 2021 event.

“Actually, this is really nice,” she said. “We didn’t have to sit around.”

Summer Borsack said she was expecting not to have a ceremony at all.

“This was a lot more than we were expecting,” she said as she posed for photos with friends in a tent hundreds of feet wide filled with photo backdrops, a DJ and a live feed showing the stage inside The Pavilion.

Chemistry major Molly Hixon, who brought her parents, said she appreciated that graduates and guests stayed together throughout the entire experience, which included students removing their face coverings briefly while walking across the stage inside The Pavilion, hearing their name read aloud and having a professional photo taken while a group of campus leaders — and their guests — looked on from just feet away.

“I liked that family was such a big part of it,” she said. 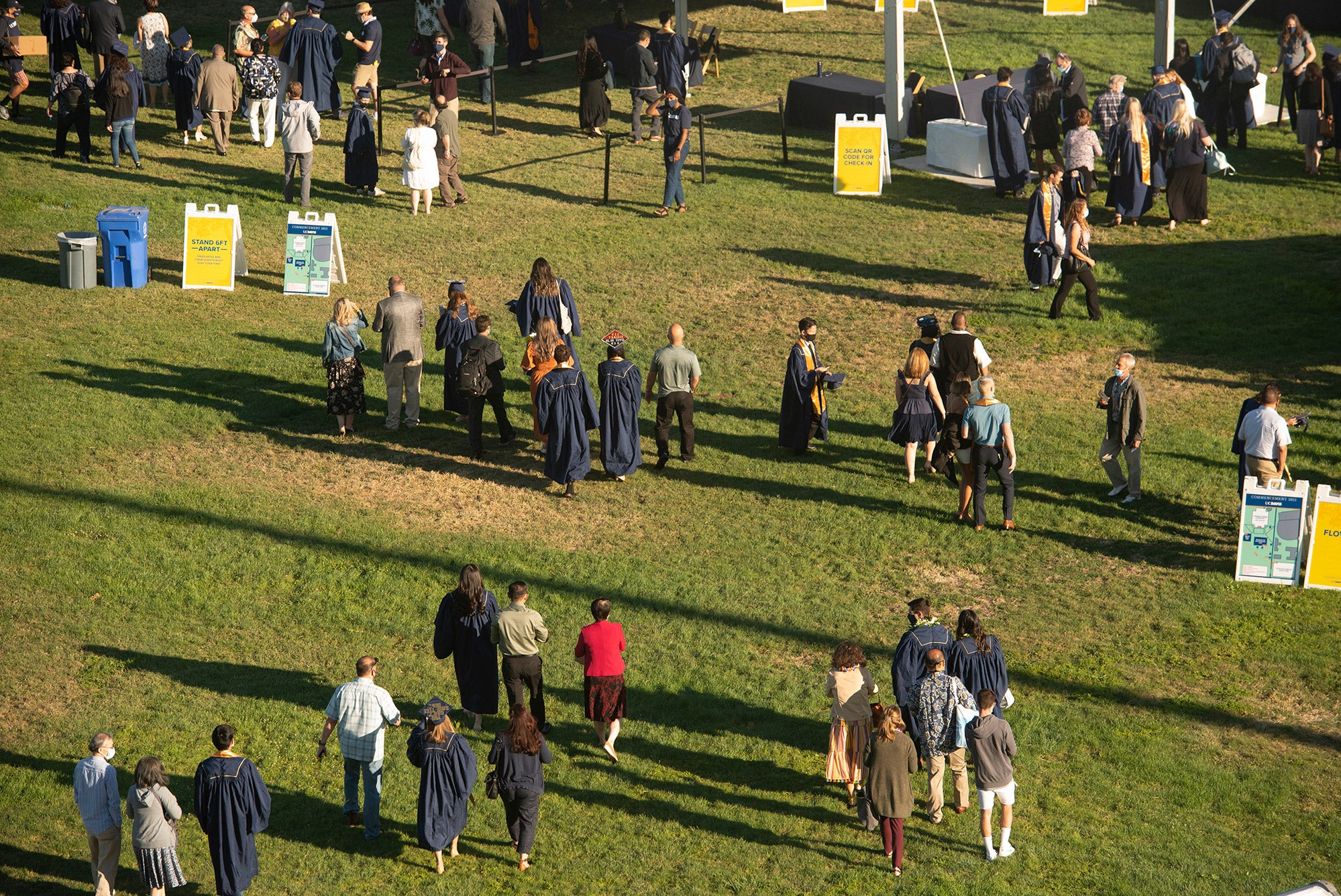 Returning to normal, but not there yet

The location was particularly poignant for Emma Gibb, a human development and Spanish double major. She played basketball all throughout her time as an undergraduate, and said it felt like “coming full circle” to both start and finish her time at UC Davis in The Pavilion, where the team plays.

“It was a sweet ending to a really hard year,” she said as she chatted with fellow graduating teammates. Those teammates are used to the ups and downs of the pandemic — last fall they played only one game before having to pause competition for two months.

The team had to decide whether to continue practicing and working toward an eventual resumption in play, and doing so meant making sacrifices.

“We had to make our own bubble as a team,” Gibb said. “We couldn’t see family.”

Play eventually resumed and the team won a fifth straight Big West Conference championship and advanced to the NCAA tournament. Some team members planned to gather off-campus after commencement because they’re all vaccinated, Gibb said.

But while there is light at the end of the tunnel, the pandemic still impacted students at the commencement processional.

Sarvien Keighobad, a neurobiology, physiology and behavior major who plans to apply to medical school now that she’s graduated, rushed out of The Pavilion to call her parents, who had been watching the livestream from their home in Iran.

They were unable to travel to the United States because of COVID-19, she said.

“It made me sad we couldn’t celebrate,” she said. “It was an emotional week.”

She plans to travel to Iran to see them on Monday.

Many students kept the event in perspective as they took selfies and posed for photos with friends.

“I’m really grateful that we had this experience, considering what state the world is in,” psychology major Mackenzie Trpcic said.

Alexis Sutherland, also a psychology major, said she was surprised and “really happy” when UC Davis announced the in-person events. Her parents, Joel and Sonja Sutherland, traveled from Corona, in Riverside County, for the event.

“They did a good job with the current circumstances to make the event meaningful,” she Mackenzie Davis, a viticulture and enology major.