Standing outside the Jan Shrem and Maria Manetti Shrem Museum of Art, as hundreds of people streamed inside on Sunday (Nov. 13), Rachel Teagle talked — and teared up — not about the grand opening ceremony that had just occurred at noon, but about what had happened the night before.

The museum hosted an overnight party for students — and 2,000 showed up. “They didn’t just come for the party,” said Teagle, who has shepherded the project since her hiring as the museum’s founding director four years ago. “They were here to see the art.”

“Our entire premise in developing this building and setting up our programming, was the hope that we could inspire our students,” she said, noting how one-third of the museum is devoted to education — and how the 125-seat Community Education Room, the Collections Classroom and the indoor-outdoor studio are all at the front of the museum, not in the back as is commonplace elsewhere.

The “ribbon” was a site-specific art installation: a chain of fabric-covered foam rings (painted by members of the community), strung from the Grand Canopy and across the museum entrance, linking the museum to the campus and community. Forty small ribbons connected the rings at the entrance, and the museum honored 40 people by selecting them to untie the ribbons, thus breaking the chain and opening the museum. The ribbon “cutters” included Rachel Teagle, Ralph Hexter, and Jan Shrem and Maria Manetti Shrem; first-generation art faculty members Manuel Neri, Roland Petersen and Wayne Thiebaud; architects, administrators, faculty, students and alumni.

“And to see the students embrace it was really moving,” Teagle said.

The public embraced it, too. More than 1,000 people turned out for the grand opening ceremony before being admitted — a few hundred at a time — into the galleries. Hundreds more people arrived later and waited in line through mid-afternoon to get in. Total attendance for the day hit 2,500.

Perched at the south edge of the main campus, the museum and its Grand Canopy look both inward and reach out to the community. In remarks before the ribbon cutting, Teagle described the theme of the grand opening, “Art Wide Open,” as a metaphor for the museum itself.

“We’re open, we’re sprawling, we’re full of light, we’re porous. … We’re open to the challenging flow of ideas that defines our university,” she said. “‘Art Wide Open’ describes a museum that is open inside and out — a museum where all are free to discover new art, and with it, new ideas.

“At the Manetti Shrem Museum, we are ‘Art Wide Open,’ meaning that we want to show a broad range of art, from art that inspires great beauty, to art that engages the critical issues of our time.”

Hexter contrasted the museum’s grand opening to the long, contentious election season that concluded last week. UC Davis, he said, is celebrating its inclusive nature with a museum that is open to all and will not charge admission.

“It’s a powerful symbol and showcase for some of the most inspired and passionate works human beings can create,” Hexter said. “Arts speak to the power of our imaginations, and the arts have a power to tie communities together and speak to our common humanity in ways that few pursuits can manage.”

“The collection they’ve been able to acquire for this opening is pretty mammoth,” said Mollie Morrison, an art teacher at McClatchy High School in Sacramento. She said the reputations of the first-generation art faculty drew her in. “To see it all here is pretty neat.”

MUSEUM AT A GLANCE 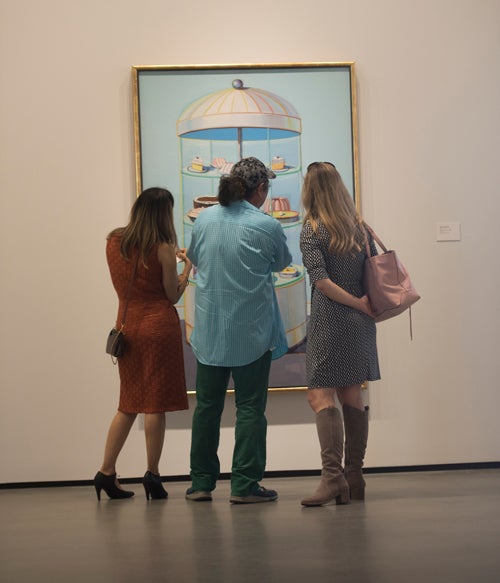 WHERE: Old Davis Road, kitty-corner from the Mondavi Center for the Performing Arts at the campus’s south entry. See museum on campus map.

PARKING: The Gateway Parking Structure and Visitor Parking Lot 1 are next door to the museum. Parking permits are required from 7 a.m. to 10 p.m. Monday through Friday (permit available for purchase in yellow boxes at the garage entry and in VP1) and during events when attendants are present.

Ski Taylor of Sacramento agreed: “I’m so impressed by the caliber of art that’s come out of Davis. I had an idea, but to see it concentrated like this shows what’s been happening.”

She and Dana Gumbiner visited the museum together, and when asked their first impression, they responded simultaneously: “Stunning.” They also said they would return.

Gumbiner added, “I’m impressed by the architecture, the multichambered exhibition space — each space feels unique — and the lighting (artificial and natural).”

Three first-year students among the first-day visitors had come for the party the night before, but, unfortunately, were among some 1,500 who did not get in due to space limitations.

Megan Gastelum, Carolina Quiroz and Kathleen Ramos, all majoring in the sciences, said they were happy they came back. “I like the uniqueness of all the art,” Gastelum said. “I’ve never seen anything like this.”

Barbara Hannafan of Martinez said the museum’s opening exhibitions prompted critical thinking. “There were many unusual things,” she said. “You can’t just take it at face value.”

Stacie Frerichs ’01, executive director of the Davis Arts Center, said the 56-year-old organization has long had a connection with UC Davis artists, and received donated works from some of the artists featured in “Out Our Way” in the 1960s.

“I’m looking forward to how all our local, collective knowledge of art grows,” Frerichs said. “There has always been an overlap between the Davis art community and the university, and this just shines a spotlight on it.”

Linda Xiong ’05 said her visit to the museum was her first trip back to UC Davis in a few years, and she was glad that art students have a new space “to come and explore.”

“This is a state-of-the-art place that will bring even more prominence to UC Davis,” she said.

Music professor Jessie Ann Owens served as dean of the Division of Humanities, Arts and Cultural Studies when planning began in earnest for the museum and the Ann E. Pitzer Center (also newly opened, with a 399-seat Recital Hall and other music facilities) — both meant to complement the Mondavi Center for the Performing Arts.

“We have good labs to do good science, and we need good places to do art and music,” she said, clearly satisfied that we have now provided those good places.

First-day museum visitor Kathy Shepherd Weiner ’86 said the new facilities are indicative of the university’s coming of age. “It’s an ag school, but it’s so much more than that,” she said.