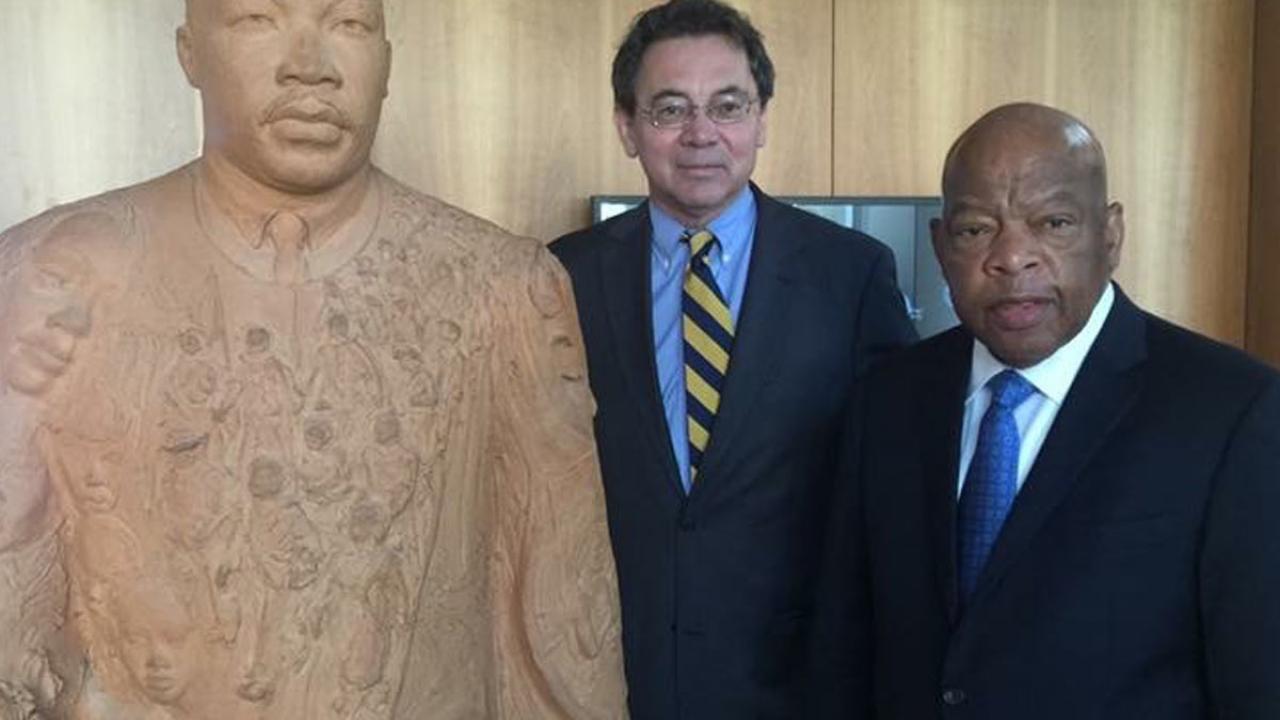 It was an incredible scene: Civil rights icon John Lewis, congressman from Georgia, visiting the life-size statue of his mentor, Martin Luther King Jr., at the UC Davis School of Law in 2016.

The terra cotta sculpture, showing King in a robe carved with scenes from his life and associated figures and events from the civil rights movement, stands in the law school’s lobby.

Dean Kevin Johnson had the honor of escorting Rep. Lewis to see the statue. Lewis had come to UC Davis to deliver the keynote address at the law school commencement.

“He spent almost an hour studying the statue, which includes depictions of many incredible moments in U.S. civil rights history,”  Johnson recalled in a post on his ImmigrationProfBlog Saturday (July 18), the day after Lewis died at the age of 80.

Pamela Wu, then the law school’s executive director of marketing and public relations, accompanied the dean and Lewis. “He recognized the images on the statue immediately,” she said, recalling the congressman saying, “That’s the Montgomery bus boycott.”

“It was astonishing,” Wu said. “Many people don’t even notice the images. Realizing that he recognized them because he had literally lived some of the experiences was a powerful moment.”

‘Beacon of truth and hope’

Rep. Lewis and Chancellor May.

Johnson’s blog post was one of several tributes by UC Davis leaders.

Chancellor Gary S. May, who had lived in Lewis’ congressional district in Atlanta, said in a statement posted Saturday: “John Lewis was a beacon of truth and hope. We looked to him for his courage and persistence in the face of inequality. We trusted his leadership in helping the United States reckon with its past and determine what kind of future we want for our children and grandchildren.

“During my years in Atlanta, I was pleased to be a resident in his district and voted for him 12 of his 17 congressional terms. He was one of my role models, and like President Obama has said, we all stand on his shoulders. Thank you, John Lewis.”

Distinguished Professor Ralph J. Hexter, who recently stepped down as provost and executive vice chancellor, was serving as acting chancellor when Lewis spoke to the law school commencement.

“An amazing memory of the great John Lewis speaking at the UC Davis Law School commencement,” Hexter wrote Saturday in a Facebook post. “It was honor to meet him and be on the same podium. Very moving to recall that our school is King Hall.”

Indeed, the King Hall-King-Lewis connection was a “selling point” for Wu as she pursued Lewis “over and over, for five years” to deliver the commencement address.

“In 2016, he finally said yes! Meeting him and hearing him inspire the law graduates has been one of the greatest honors of my life,” said Wu, who now serves as the director of News and Media Relations at UC Davis Health.

Rep. Lewis gave generously of his time talking with law school students and their families, Dean Johnson said, noting that the congressman also met with and inspired a group of alumni, sharing his thoughts on civil rights, the Trump campaign and the continuing struggle for justice for all.

Dean Johnson said Lewis gave an inspiring speech, advising the graduates to get into “good trouble” fighting for justice. “And, I must add, Congressman Lewis sure knew how to tell a gripping and meaningful story,” the dean said.

Lewis had adapted the term “good trouble” from what his parents had told him during his childhood in Alabama. According to The New York Times, “They had taught him as a child to accept the world as he found it. When he asked them about signs saying ‘Colored Only,’ they told him, ‘That’s the way it is, don’t get in trouble.’

“But as an adult, he said, after he met Dr. King and Rosa Parks ... he was inspired to ‘get into trouble, good trouble, necessary trouble’” — and getting into “good trouble” would become his motto for life.

Wu, in a Twitter post Friday, said: “It’s amazing to meet one of your personal heroes in person. But it’s incredible when they’re even more wonderful than you thought they would be. Tonight that memory is bittersweet. @repjohnlewis, wherever you may be now, I know you will keep making #goodtrouble.”