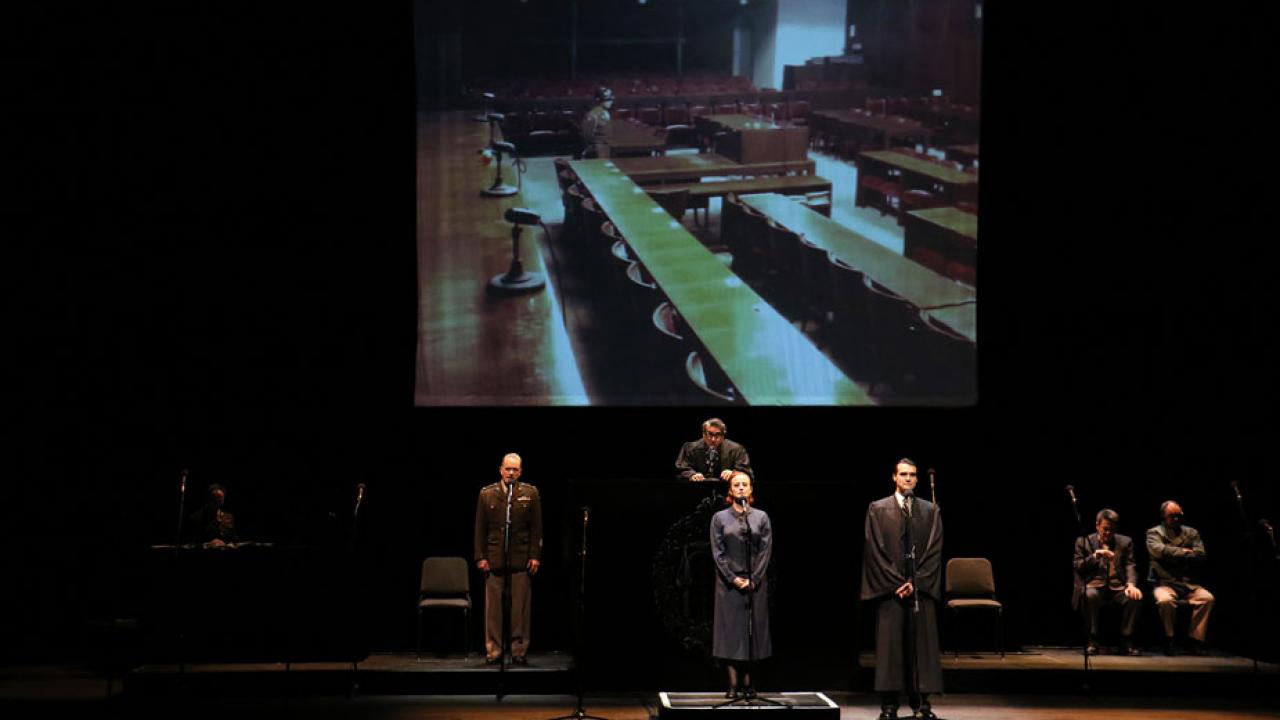 ‘Nuremberg’ On the Radio (On Stage)

This is the April Well-Being Ticket Deal, sponsored by the Staff and Faculty Health and Well-Being Program, and the Mondavi Center for the Performing Arts. Each month they offer $10 tickets to a show — in this case the L.A. Theatre Works production of Judgment at Nuremberg, 8 p.m. Tuesday, April 18, in Jackson Hall. A preperformance talk is scheduled at 7 p.m., by UC Davis’ David Biale, Emanuel Ringelblum Distinguished Professor of Jewish History, Department of History.

You have a limited opportunity, April 1-10, to buy the $10 tickets (limit two per person). See ticket purchase details below.

L.A. Theatre Works has been the foremost radio theater company in the United States for more than two decades. Its unique live radio theater-style performances, where a first-rate cast performs on stage with scripts in hand, and a Foley artist creates sound effects, are immediate, spontaneous and create a connection to the audience rarely felt in a traditional theater setting.

One of the great courtroom dramas of the last century, Abby Mann’s Judgment at Nuremberg became an Academy Award-winning film and a stage play that is both surprising and unsettling. This cast of unforgettable characters play out their high-stakes game against the backdrop of a looming Cold War, shifting political alliances and the shocking and vivid memories of the Holocaust and World War II.

Jazz: Dave Holland, Chris Potter, Kevin Eubanks and Eric Harland — The collaborative nature of jazz makes the idea of super groups almost commonplace. So, when a group like this one comes along — a group with such a distinct identity and history — we are well advised to give a listen. 8 p.m. Wednesday, April 5, Jackson Hall.

Michael Fabiano, tenor — Considered one of the most important young talents in the world today, he is described by Opera Britannia as having a “rich, honeyed tenor ... that promises a huge amount in the future.” 8 p.m. Thursday, April 6, Jackson Hall.

Speaker: Amitav Ghosh, novelist — With titles that include The Circle of Reason (1986), The Shadow Lines (1988) and Sea of Poppies (2008), he’s sold more than 3 million books worldwide (with translations into 33 languages). His appearance is part of the India in the Artist’s Eye Festival. 8 p.m. Wednesday, April 12, Vanderhoef Studio Theatre.

Concert: Prahlad Singh Tipanya — A locally, nationally and internationally acclaimed folk singer from Lunyakhedi, a small village in Ujjain District, Madhya Pradesh, India. He is renowned for his singing and interpretation of Kabir, the great 15th-century Hindi poet, along with other Hindi poets associated with nirgun devotion. His appearance is part of the India in the Artist’s Eye Festival. 8 p.m. Thursday, April 13, Vanderhoef Studio Theatre.

Arlo Guthrie — On his visit to the Mondavi Center, he celebrated the 50th anniversary of “Alice’s Restaurant” (in a sold-out Jackson Hall, by the way). Now the beloved 1960s counterculture singer-songwriter and social commentator revisits his classic album, Running Down the Road, bringing his singular voice, timeless stories and unforgettable classic tunes, including the psychedelic title song and folk-rock styling of “Coming Into Los Angeles.” 8 p.m. Saturday, April 15, Jackson Hall.

Release the Hounds: An Evening With Julian Lage & Chris Eldridge, and Aoife O’Donovan — A night of intrepid song craft and guitar virtuosity. Singer-songwriter O’Donovan plays her songs just as she wrote them, with her guitar and voice. Lage and Eldridge follow with a masterly acoustic duo performance that pushes the envelope of folk, bluegrass and jazz. 7 p.m. Sunday, April 23, Jackson Hall.

Persistence Resistance: “Changing Landscape” — Session 2 in the Persistence Resistance series presents documentaries that address two different kinds of loss, and place it in conversation with environments both rural and urban, cultivated and not. 7 p.m. Monday, April 24, Vanderhoef Studio Theatre.