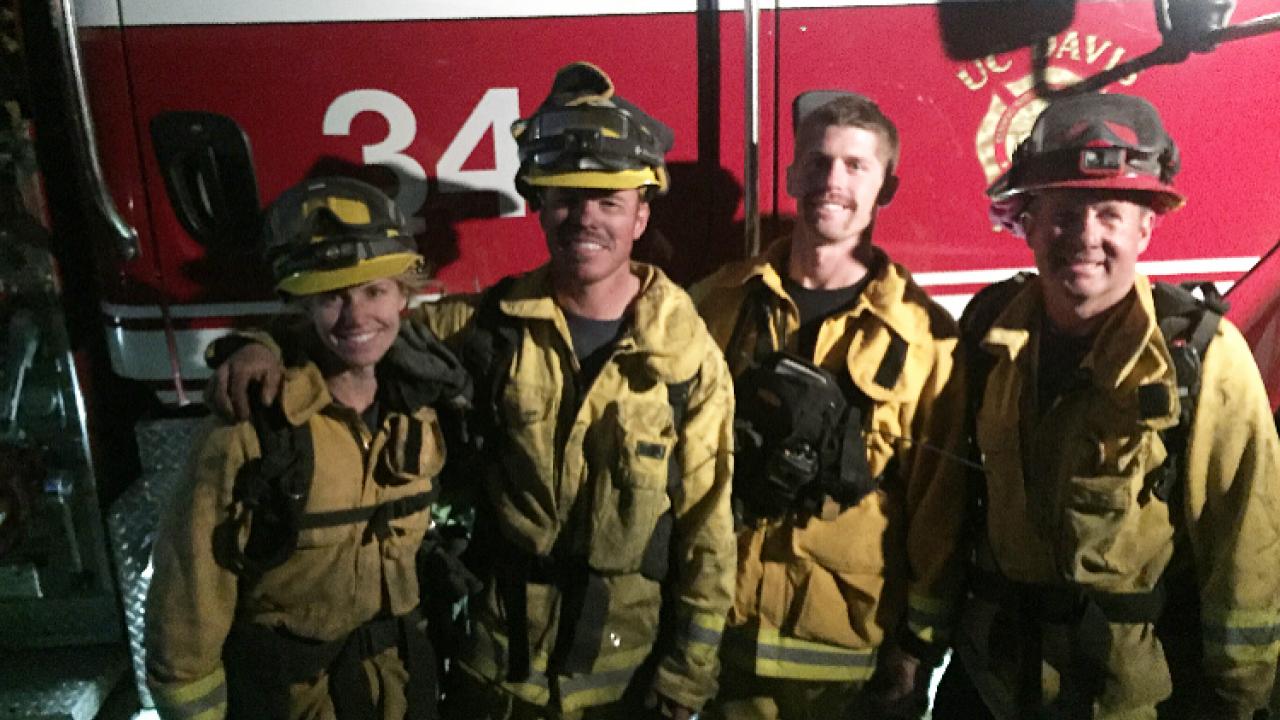 Campus firefighters are coming home after two weeks assisting in the fight against the Thomas Fire in Southern California.

Trauernicht had been planning on sending a replacement crew, but the state Office of Emergency Services said the crew would not be needed — which means that all UC Davis firefighters will be home for the holidays.

Stack parking in 3 locations next quarter

Stack parking, the valetlike program to fit more cars into existing space around campus, is expanding in winter quarter.

Starting Monday, Jan. 8, the service will be offered in Lot 25, near the Activities and Recreation Center. That’s in addition to Lot 47 (near the Tercero Residence Halls) and the Quad Parking Structure, where it was offered during fall quarter.

Clifford Contreras, director of Transportation Services, or TAPS, said the service will be offered in all three locations through the winter quarter, and TAPS will “evaluate the program afterwards to determine if the service is necessary for the spring quarter.”

With stack parking, you may be directed to park in an aisle. If you do, you’ll leave your keys with the attendants, and they may move your car throughout the day as others come and go. The service allows more cars to fit into the existing amount of space while TAPS explores possible programs and incentives that could allow the unit to avoid the expense of building a new parking structure.

Read a more detailed explanation of how stack parking works.

San Francisco’s interim mayor, London Breed, is a UC Davis alumna, earning a Bachelor of Science degree in political science-public service in 1997. Under the city charter, as president of the San Francisco Board of Supervisors, she succeeded Ed Lee automatically upon his death Dec. 12.

Lee was in the middle of his second term mayor, with two years left to serve. Now, the mayor’s office will go on the ballot in June, to fill the remainder of Lee’s term. In the interim, supervisors can choose to have Breed remain as interim mayor or appoint someone else.

Faculty now have an easier way to identify wait-listed students in class rosters in UC Davis Canvas. Instructors can see the improvement when they look at the roster displayed in the “People” tool of their course sites. Beginning with classes taught in the winter quarter/spring semester, any students who are wait-listed will have “Student_Waitlist” printed after their names Previously, students were listed simply as students, whether they were on a wait list or not. Read more.

Lots of Toys for Tots — way to go!

Toys for Tots barrels overflowed at UC Davis with 376 toys, as donors beat the university’s toy drive goal by 25 percent! Mail Services personnel conducted the drive on behalf of the Marine Corps League of Yolo County.

The UC Davis donations added to hundreds of other toys the league collected, for distribution last weekend to Yolo County children.

Jen Carmichael, general manager of Distribution Services, which includes Mail Services, gave a shout-out to the Police Department as the biggest contributor at UC Davis.

‘Transitioning to Retirement’ for staff and faculty

Enrollment is underway for “Transitioning to Retirement,” presented by the Retiree Center and the Office of Academic Affairs with support from Staff Development and Professional Services. Topics include pension options, retiree health benefits, Social Security and financial planning for retirement.

Each campus — Davis and Sacramento — will have its own program, and each program will have separate tracks for staff and faculty. Meetings will be held once a week for four consecutive weeks:

The organizers recommend that participants register for the entire four-week series; however, each session is available for individual registration.

Space is limited, so, if you wish to sign up, the organizers ask that you be within three years of retirement. If your retirement is further out, remember “Transitioning to Retirement” is held annually.

UC Davis football delivered a gift Monday (Dec. 18): the 2018 schedule! Season tickets went on sale at the same time — and every season ticket will include admission to one of next year’s away games, our fourth match-up with Stanford.

Here are the five home games:

For the Stanford game, UC Davis Athletics will partner with the Cal Aggie Alumni Association to organize a pregame tailgate and possible bus transportation; season ticket holders will receive additional details in the upcoming months.

Oh, and lest we forget, the Aggies have one win (2005) in their four games against Stanford.

The College of Biological Sciences has posted a memorial tribute to Melvin M. Green, distinguished professor emeritus of genetics, who died Oct. 24 at the age of 101. He was a co-founder of the Department of Genetics (now part of the Department of Molecular and Cellular Biology) and a member of the National Academy of Sciences.