The bowling lanes in the Memorial Union Games Area are closed through early April because of safety concerns with the pinsetter machines, officials said Monday (March 11).

“Bowling in the Games Area downstairs in the Memorial Union is temporarily unavailable while we perform mandatory safety updates,” the Games Area announced on its Facebook page. “We anticipate that bowling activities will reopen by April 1 and we will post updates as the work progresses. We sincerely apologize for this inconvenience.”

Unfortunately, the Games Area had to cancel the winter staff bowling league two weeks before it was supposed to end. Staff bowling will return for spring quarter.

At issue is the safety of the alley’s pinsetters, which are more than 50 years old.

While the console games, board games and billiards in the Games Area remain available, staff members are offering vouchers for free time at a new PC gaming center nearby to make up for the inconvenience.

Gunrock Gaming is in the former home of the TechHub on the east side of the MU (automated teller machines are on the east wall of Gunrock Gaming). The center features 27 high-end gaming computers and about a dozen different games people can play against others in the room or online opponents.

Staff members have been testing Gunrock Gaming’s setup for about a month, and the center was due to be open for limited hours this month. Now, though, with the bowling lanes closed, Gunrock Gaming’s hours have been expanded: 2–8 p.m. Monday-Friday. Fees are $4 per hour for students and Campus Recreation members, and $8 per hour for others. Staff members in the Games Area are handing out vouchers good for one hour of free play.

A grand opening for Gunrock Gaming is planned for April.

Recruiting for staff advisor to the regents

Staff across the UC system are once again invited to apply for the position of staff advisor to the Board of Regents.

The position is open to nonrepresented and represented staff, and non-Academic Senate academic employees with at least five years of UC service. The application deadline is April 1 for a two-year term starting this July.

Questions about the staff advisor or the application process? Contact Juliann Martinez at UCOP Systemwide Employee Relations by email or phone, 510-287-3331.

— UC Office of the President

Watch parties and sendoff for basketball

The Aggie women’s and men’s basketball teams compete this week in the Big West Conference tournaments, the women as the regular-season champion and No. 1 seed, the men as the No. 6 seed. Intercollegiate Athletics announced a sendoff celebration for the women’s team and watch parties for both teams.

• Women’s team — The sendoff is planned at 10:45 a.m. Thursday (March 14) as the women board buses en route to the Honda Center in Anaheim. The celebration will be at the north end of the Memorial Union Terminal, outside Hickey Gym. Everyone is welcome to attend.

As the No. 1 seed, the Aggies have byes in the first two rounds, today and Wednesday (March 12-13), at UC Irvine. The tournament then moves to Anaheim, where the Aggies are set to play at noon Friday (March 15). All of the women’s tournament games will be livestreamed on ESPNU3.

Watch parties will be held at Woodstock’s Pizza, 219 G St., Davis. All parties are open to the public, with discounts for Aggie fans.

The UC Davis Division of Continuing and Professional Education next week will host the NAFSA: Association of International Educators Region XII Northern District Spring Conference. The meeting will be held Monday (March 18) at the International Center.

NAFSA is the world’s largest nonprofit association dedicated to international education and exchange. The Region XII Northern District Spring Conference unites nearly 200 attendees each year from more than 80 institutions and organizations. It is the most comprehensive event serving the diverse needs of the entire international education community in Northern California.

The 2019 conference theme, “Harvesting Best Practices in International Education,” encourages reflection on ways to stay abreast in a field that continuously undergoes change. The conference serves as a forum to connect with peers who have similar job challenges and who can identify possible solutions. 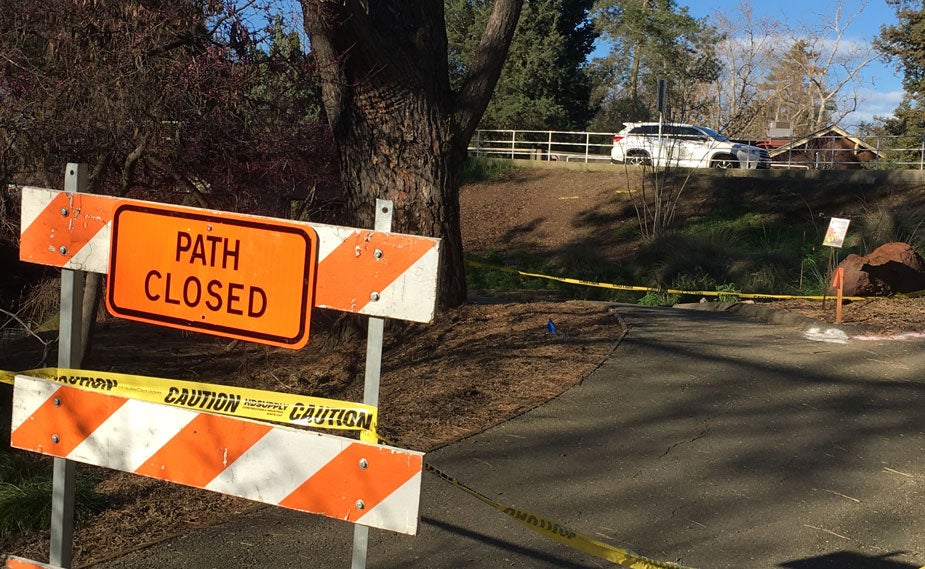 “Path Closed” and “Detour” signs are going up around the La Rue Road bridge over the Arboretum Waterway as a contractor starts work on replacing the bridge — a project expected to last until next spring. Cars and bicyclists will be able to cross the waterway at all times during the construction, but, in a change of plan, the sidewalks will be off-limits. Arboretum paths under the bridge are closed, and detours are being set up. Project information, including a map of the closures and detours, is available on the Design and Construction Management website.

Citizen science along the waterway

Calling all community scientists and arboretum visitors! The UC Davis Arboretum and Public Garden has launched a survey to monitor the quality of the Arboretum Waterway and everyone is welcome to participate.

Located around the Arboretum Waterway loop trail are signs that read “Water Survey” along with numbers, 1-6, designating the region you are observing. Once you spot the sign: Take out your smartphone, go to the web address on the flier, and share your observations in the brief survey. You are now a community scientist — it's that easy!

Collected data will help assess wildlife, litter, water quality and algae conditions in the particular area of the waterway you observe. The survey is a fun, quick and engaging activity for anyone interested in becoming a community scientist and documenting their observations in nature. Complete one survey or all six – you are especially encouraged to complete the survey over time on different days – every observation helps.

“We don’t have baseline data for what the Arboretum Waterway looks like throughout the year,” said Nina Suzuki, waterway steward. “Survey responses by the community, alongside water samples and data collection by the Waterway Stewardship Learning by Leading interns, will offer a foundational understanding of the Waterway’s conditions throughout the year. With our community’s feedback, caretakers will be able to recognize and tend to the unusual occurrences.”