“The guys have been chomping at the bit to get practice started, and I’ve had to reel them in and tell them to relax the last few days,” Gould said the day before his players hit the field Aug. 7. “Everybody’s really anxious and excited and nervous and everything that goes along with that.” 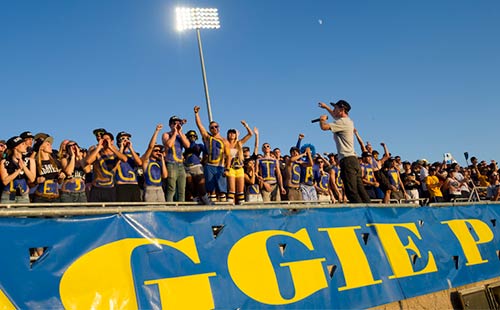 Aggie Pack is the easiest and best way for students to support UC Davis athletics. And, by joining Aggie Pack, students can participate in the largest university spirit organization in the nation.

“UC Davis has set the standard in the academic world and now, it's up to you, the UC Davis student, to be the standard in support of the quest for athletic championships,” says the Aggie Pack website.

Students are urged to show their Aggie Pride by attending athletic contests, wearing Aggie blue and filling up the Aggie Pack student section with “the craziest, most devoted fans in the NCAA.”

To join the Aggie Pack for free, simply attend any Aggie Pack athletic event. Check in, get a free Aggie blue T-shirt and be ready to cheer your lungs out.

They had special incentive: new artificial turf installed this summer, allowing for faster play. The endzones have a new color: blue with gold lettering, and the field has two shades of green, alternating every five yards except for the 10-yard stretch of dark green at midfield.

So, with a new field and a new season, the Aggies are ready to leave behind the unpleasant taste of last year’s uncharacteristic 2-9 record. That bitterness remained after the final whistle of the 2014 season and provided extra fuel during early morning winter conditioning drills and through a successful month of April practices.

Hard work before opener at Nevada

Now the players are back and ready to cash in on that hard work and determination with a productive 28 days of camp prior to the season opener at Nevada — a Thursday night game, Sept. 3, in Reno.

The Wolf Pack is the first of two Football Bowl Subdivision opponents for UC Davis this season; the other is Hawaii, which, like Nevada, is a member of the Mountain West Conference. Hawaii hosts the Aggies on Sept. 19.

The Aggies will open their five-game home schedule on Saturday, Sept. 12, against South Dakota, the only other nonconference foe they’ll see in 2015.

The rest of the schedule comprises rugged rivals from the Big Sky Conference, of which UC Davis is a member for the third year. The Aggies will host perennial power Montana Oct. 3, Northern Arizona Oct. 10 (Homecoming), Southern Utah Oct. 24 and Cal Poly Nov. 14, while visiting North Dakota Sept. 26, Northern Colorado Oct. 17 and Weber State Nov. 7 prior to the annual Causeway Classic at Sacramento State Nov. 21.

Besides the athletics on the field, the Aggie football experience also will include exciting promotions — for example, the sixth annual Brewfest, Oct. 10, celebrating UC Davis' status as the No. 1 academic brewing program in North America. There will be ample opportunity to sample the libations from more than 50 breweries. Plenty of other pregame festivities are also planned for each home game.

The Aggies will try to make their faithful happy by providing excitement on both sides of the ball. They return with 66 letter winners, including 21 starters, providing the experience and depth needed against the tough slate of opponents.

Quarterback Ben Scott, who didn’t take over the starting reins until midseason last year, threw for 1,734 yards and 19 touchdowns in just seven games. Receiver Ramon Vargas was one of his favorite targets, hauling in 41 passes for 665 yards and eight touchdowns.

On the defensive side, six of the top eight tacklers are back, including safety Keleen Culberson, who amassed a team-high 73 tackles, and linebacker Artice Nelson, who had 60.

“We’re so eager to get started, to spend time — day in and day out — finding out who we’re going to be,” said Gould, who is starting his third season at UC Davis. “The biggest thing we need is to grow as a family. We’re looking forward to building that.”

Of course, the Aggie family wouldn’t be complete without the support of the Aggie Pack as well as alumni and community.

Ticket information is available at 530-752-AGS1 (2471) or by visiting the UC Davis Aggies official athletics site.