With apologies to an old riddle: What’s black and green and white (striped) all over?

Answer: La Rue Road in front of UC Davis Health Stadium, between Garrod Drive and Hutchison Drive. The black is the new pavement laid down in the road’s reconstruction (the southbound lanes last summer, the northbound lanes this summer).

Now, with both sides completed, the campus has restriped this section of the campus thoroughfare so that it has, in each direction, only one lane for automobile traffic, instead of two, making room for bike lanes (painted green) and parallel parking for cars.

The parking spaces — approximately 50 of them — will be for A and C permit holders, and drivers with visitor permits. But, take note: Parking will not be allowed there until the permit signs go up (expected as early as Thursday, Sept. 18).

More striping will delineate a 3-foot buffer between the bike lanes and the curbside parking spaces — room enough for bicyclists to avoid being the victim of a “dooring” (the crash that occurs when a car door is suddenly flung open in a cyclist’s path).

With this project, La Rue has bike lanes almost its whole length, between Russell Boulevard in the north and Old Davis Road in the south. One gap, on the bridge across the Arboretum Waterway, is being filled in: bike lanes will be included on a wider span now under construction, with completion due next summer. 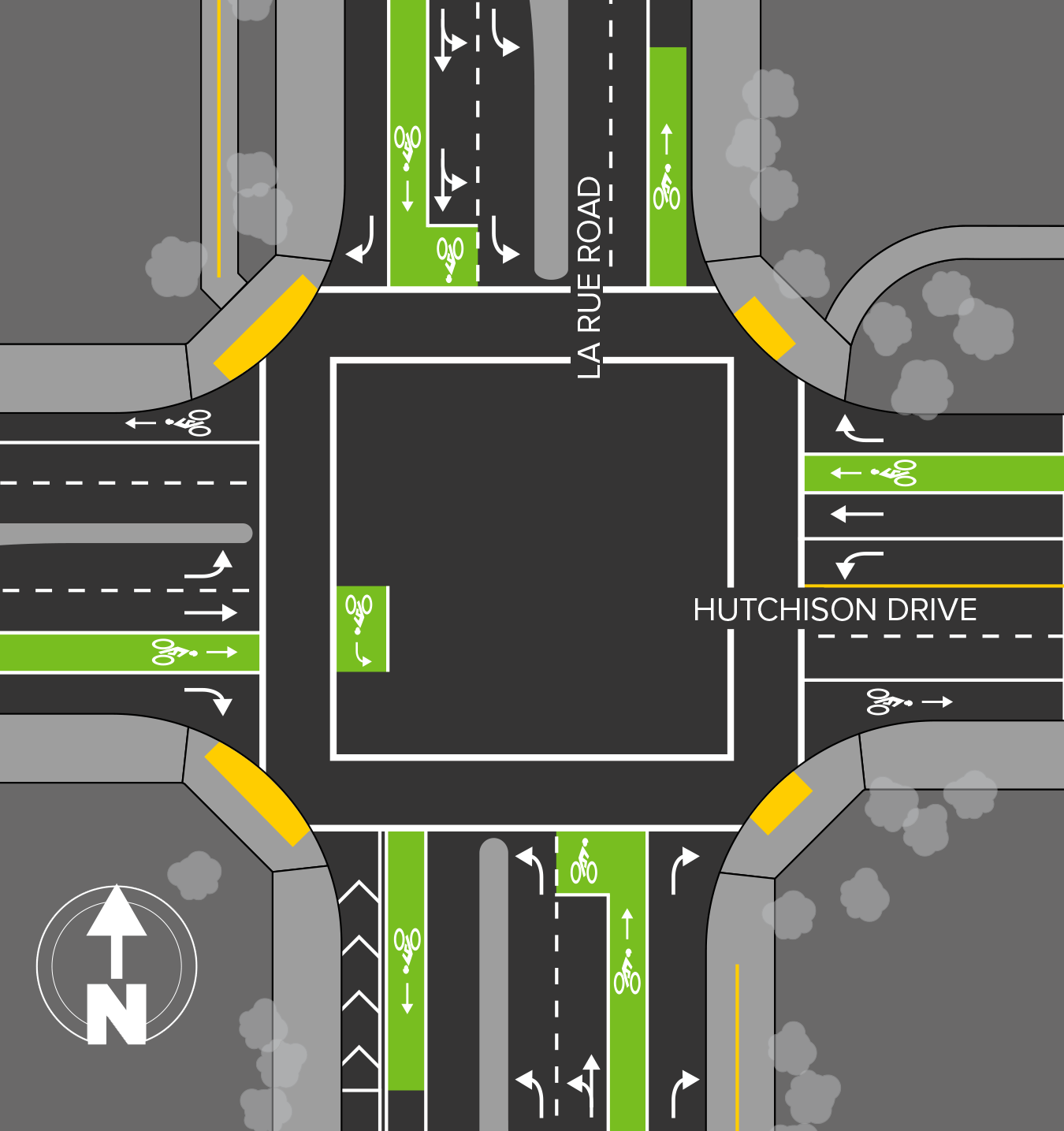 There will be more green paint in three “bike boxes” at the intersection of La Rue and Hutchison — the first bike boxes on campus, places for bicyclists to wait for green lights or safe openings to merge into traffic.

Two of the boxes will be for bicyclists southbound on La Rue who intend to turn left from La Rue onto eastbound Hutchison (into the campus core). Here’s how the boxes work, based on information provided by the UC Davis Bicycle Program, part of Transportation Services, or TAPS:

The third box will be for bicyclists northbound on La Rue, riding in the bike lane, who intend to turn left onto westbound Hutchison (heading toward Highway 113 and UC Davis West Village). Information provided by the Bicycle Program states: If you arrive at Hutchison on a red light, wait in the bike box at the head of the turn lane; when the light turns green, turn left and merge into the bike lane on Hutchison. If the light is green as you approach, safely merge into the flow of cars in the turn lane next to you and make your turn. If you cannot safely merge, and the light turns red, move into the bike box so you can be ahead of the cars when the light turns green again.

The Bicycle Program says drivers also need to learn about bike boxes, wherever they may be: