This Donald Trump isn’t moving into the White House; he’s coming back to UC Davis! We’re talking about Neopalpa donaldtrumpi, a tiny moth that some people say has hair like the new president’s.

Needless to say, this newly discovered species is making headlines around the world and the internet.

The first specimens to be identified came from UC Davis’ Bohart Museum of Entomology. Well, they really came from Southern California’s Imperial Sand Dunes (also known as the Algodone Dunes). But a UC Davis expedition collected them there and brought them back to the museum.

Professor Lynn Kimsey, the museum’s director, led that expedition, which she described as “a very intensive survey of the Algodones … that we did on contract with the U.S. Bureau of Land Management starting in 2007.”

Recently, the moths made their way to Vazrick Nazari of Canada’s national entomology collection, and he discovered them to be a species all their own — one that had never been identified. The seven moths came to him as part of a loan of 319 specimens he obtained from the Bohart in 2014.

Butterfly Hunt Ends Unexpectedly —  Not even Professor Art Shapiro could predict how this year's contest would end.

With a collection of more than 7 million specimens, seventh largest in North America, the 70-year-old Bohart serves as a lending library for the national and international entomology research communities. “Collections like ours pretty much all do this,” Kimsey said. “There are so many different kinds of insects that no community can possibly have specialists in more than a very few insect groups.”

Nazari included his N. donaldtrumpi discovery in a research report posted to the Pensoft Publishers’ ZooKeys open-access journal on Jan. 17. Pensoft put out a news release the same day, describing how the scientist, while going through the material he had borrowed from the Bohart, “stumbled across a few specimens that did not match any previously known species.”

What Do You Think? 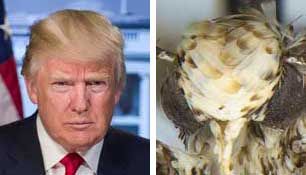 Vazrick Nazari also pointed out the yellowish-white scales on the adult moth’s head, saying the scales resembled Trump’s hairstyle — something the Pensoft news releases refers to as “an amusing reference.” What do you think? Resemblance ... or not?

“Following thorough analysis of these moths, as well as material from other institutions, the scientist confirmed he had discovered the second species of a genus of twirler moths,” the news release stated. In his research report, Nazari cited a unique genitalia and wing pattern in what he would subsequently name Neopalpa donaldtrumpi, and he noted that DNA testing further supported his discovery of the new species.

Kimsey said the specimen with the “bad comb-over” had not been returned — but it will be. “We’ll probably put up a display for Biodiversity Museum Day (Feb. 18),” she said. “We hadn't really planned to put the specimen out, as it’s pretty hard to see.

“To be honest, it’s not much to look at with a wingspan of just under a centimeter. We’ll definitely post some photos.”

Nazari said he named the moth in honor of Trump, and that the “hair style” was only part of his reasoning. The scientist said he also hoped the name — and corresponding fame — would “bring wider public attention to the need to continue protecting fragile habitats in the U.S. that still contain many undescribed species.”

Kimsey said: “I'm not sure whether or not this will get folks to be more conservation-minded given the current political atmosphere. People don't generally view desert lands as valuable.”

She does, most certainly, saying about the Algodones, where the Bohart collected its N. donaldtrumpi specimens: “This turns out to be a very unusual habitat with about 2,000 different kinds of insects, 6 percent of which are new to science.”

And, about deserts overall: “They are really quite unusual habitats with the potential to yield genes and biochemicals of great industrial and medical value.”

We’re not sure, either, if the public is paying attention to Nazari’s conservation appeal, but we know the story of the Donald Trump moth is getting massive attention in the media. Here are some of the headlines: