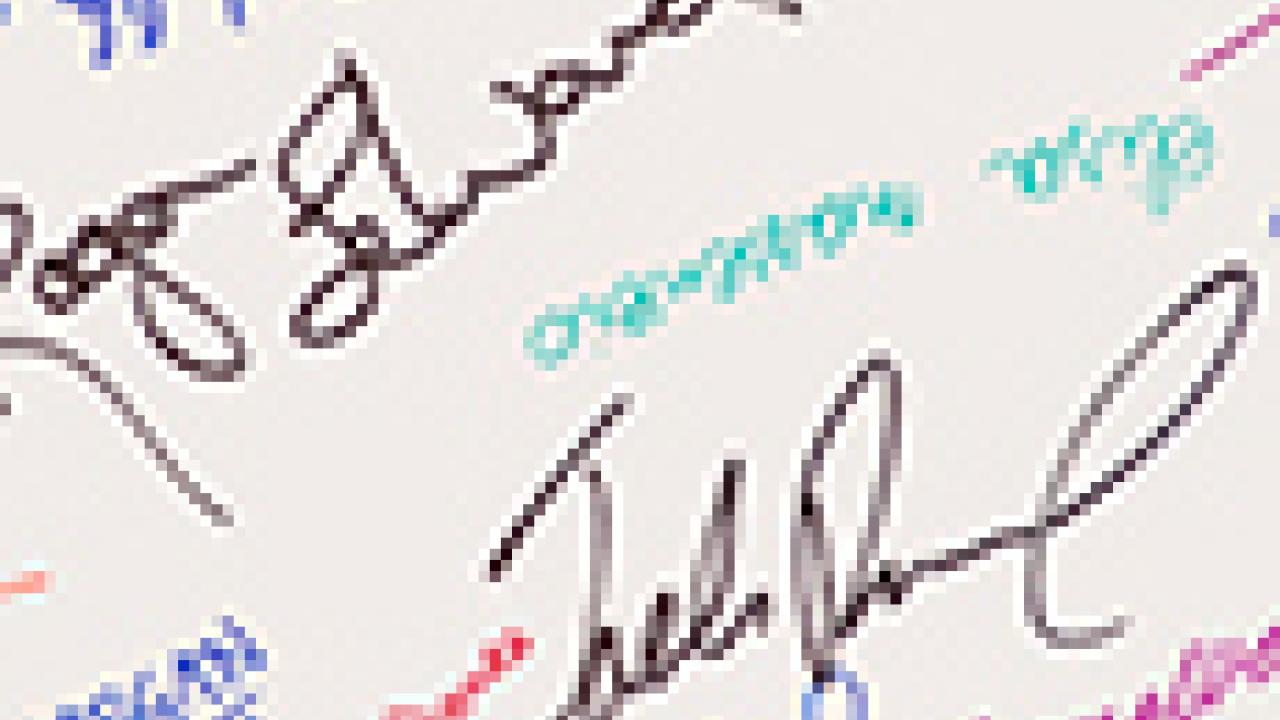 About 250 people came out March 13 to literally make their mark on the Jan Shrem and Maria Manetti Shrem Museum of Art. At the “topping out” ceremony and celebration, students, faculty, administrators and guests signed a steel beam before seeing it hoisted into place where it will be visible when the museum is completed.

“With its unique ability to combine education within an atmosphere of unfettered creativity, the Shrem Museum will ignite discovery and innovation and have a transformative effect on our university,” Chancellor Linda P.B. Katehi said.

“When completed I fully expect this museum to magnify the power of art across our university, fueling discovery in all that we do,” Katehi said.

The audience included Jan Shrem, founder of Clos Pegase winery in the Napa Valley, who made the museum possible with a $10 million gift; his wife, arts patron Maria Manetti Shrem; Margrit Mondavi, who has long been a supporter of the arts at UC Davis; and internationally acclaimed artist and Professor Emeritus Wayne Thiebaud.

The museum at the campus’s south entry will include a 50,000-square-feet “grand canopy” that floats over 30,000 square feet of interconnected interior and exterior spaces. The design was created by associated architects SO – IL, based in New York City, and the San Francisco offices of Bohlin Cywinski Jackson. The museum is scheduled to open during the 2016-17 academic year.

“Our celebration happens to coincide with ‘admit day,’ which means that thousands of student are learning that they have been admitted to this university,” said Ralph Hexter, provost and executive vice chancellor. “The coincidence highlights the fact that this wonderful new facility will be an incomparable resource for new generations of students of all backgrounds for many, many years to come.”

“It was his vision in the 1990s that an arts district would be crated here at the campus’s front door,” she said.

She used the catch-phrase “count me in” to encourage faculty, students, staff, volunteers and donors to become involved in the museum.

“From the beginning, the Shrem Museum has been a project of community involvement and open access to the arts,” she said. “We reaffirmed that commitment today as we each singed our names to the beam.”