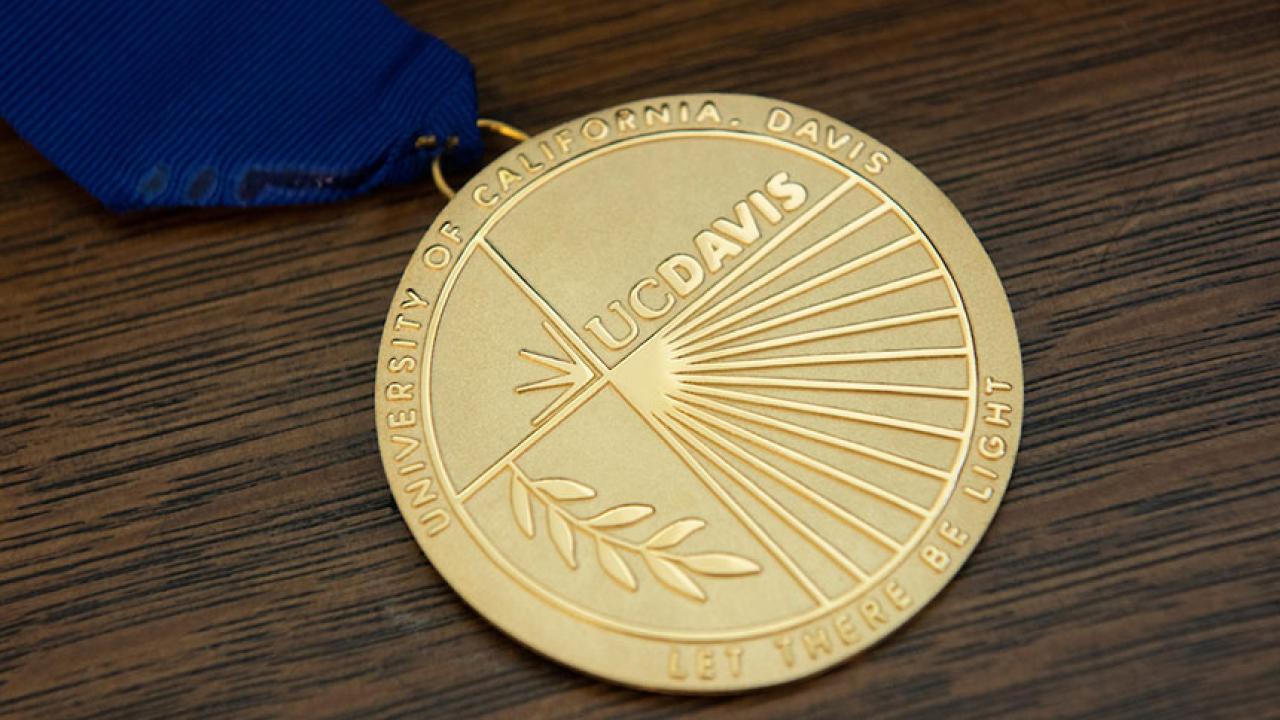 Michael Chapman, John and Lois Crowe, and Gurdev Khush to Be Honored With UC Davis Medal

The University of California, Davis, is pleased to announce this year’s recipients of the UC Davis Medal, the highest honor the university bestows on individuals.

Michael W. Chapman, UC Davis alumnus and chairman emeritus of the Department of Orthopaedic Surgery at UC Davis Medical Center; John and Lois Crowe, pioneering scientists and philanthropists; and Gurdev Khush, professor emeritus of plant sciences, will all be recognized for their extraordinary personal achievements and contributions to the ideals of higher education on which UC Davis was founded.

First presented in 2002, the UC Davis Medal recognizes individuals of rare accomplishment “to be heralded today and in perpetuity” as special members of the UC Davis community. Past honorees include such well-known individuals as former President Bill Clinton, artist Wayne Thiebaud, and Robert and Margrit Mondavi.

He wrote the book on orthopaedic surgery

Michael Chapman, considered one of the founders of modern trauma surgery, is the first medical doctor to be honored with the UC Davis Medal. Chapman’s groundbreaking work earned the UC Davis Medical Center’s trauma service an international reputation. The Michael W. Chapman Emergency and Trauma Center, which includes the region’s only Level I trauma center for adults and children, is named in his honor.

Chapman is an alumnus of American River College and UC Davis. He received his M.D. degree from the University of California, San Francisco. His research career focused on the treatment of trauma and the use of bone-graft substitutes for bone loss. He holds eight U.S. patents, and has authored 169 publications including the four-volume Chapman’s Orthopaedic Surgery, considered a definitive text on orthopaedic surgery.

While chair of the Department of Orthopaedic Surgery at UC Davis and a leader on the trauma team, he improved recovery times and outcomes for thousands of patients with severe fractures.

Since retiring in 2000, Chapman has been a strong philanthropic leader for UC Davis and has served as chair of the UC Davis Foundation. Despite having won numerous national awards in his field, Chapman said being honored with the UC Davis Medal is especially significant.

“UC Davis is dear to my heart,” said Chapman. “This award is very special to me, in that it recognizes work outside of my professional field. That kind of peer recognition from people who are not surgeons is especially meaningful.”

John and Lois Crowe worked as a research team and were instrumental in helping UC Davis become one of the top rated biological science programs in the nation.

John is professor emeritus of molecular and cellular biology in the College of Biological Sciences. He earned his Ph.D. from University of California, Riverside. Lois received her Ph.D. from UC Davis and was a biophysicist in the Departments of Zoology and Molecular and Cellular Biology before retiring.

The two are known for their pioneering work toward understanding how some organisms survive extreme drying. Their discoveries about how these organisms use a simple sugar called trehalose to preserve their integrity in the dry state led to inventions that are in widespread use in pharmacy, medicine and agriculture. For example, their work has enabled the drying of fragile drugs, human cells, foods and plants. Human platelets can be stored dry, improving their storage life from just five days to at least two years.

“They are a faculty member and an alumna of UC Davis whose accomplishments in research have brought international acclaim to the university and whose inventions have had a major impact on society,” said Mark Winey, dean of the College of Biological Sciences.

The Crowes have also made substantial volunteer and philanthropic contributions to UC Davis. Both are founding members of the Davis Chancellor’s Club and the Mondavi Center Volunteer Advisory Board. Lois was also a UC Davis Foundation trustee from 2009 to 2015.

Gurdev Khush is perhaps best known for his work with the International Rice Research Institute, where he spearheaded the program for developing high-yielding and disease- and insect-resistant varieties of rice.

Khush graduated from Punjab Agricultural University in India and earned his Ph.D. from UC Davis. During his 35-year career at IRRI, he helped develop more than 300 innovative rice strains, including IR36. That strain, released in 1976, became the most widely planted food crop the world has known.

Owing in large part to Khush’s contribution, world rice production increased from 257 million tons in 1966 to 718 million tons in 2011. Khush is considered one of the heroes of the Green Revolution. In recognition of his achievements, he was awarded the 1996 World Food Prize.

Khush has been honored with virtually all of the top international agricultural prizes, but he said receiving the UC Davis Medal means a great deal.

“It means so much,” said Khush. “I could not have accomplished what I have without the training I received at UC Davis.”

UC Davis Chancellor Gary S. May will present the UC Davis Medal to recipients during a gala on June 8 at the Sheraton Grand Hotel Sacramento.