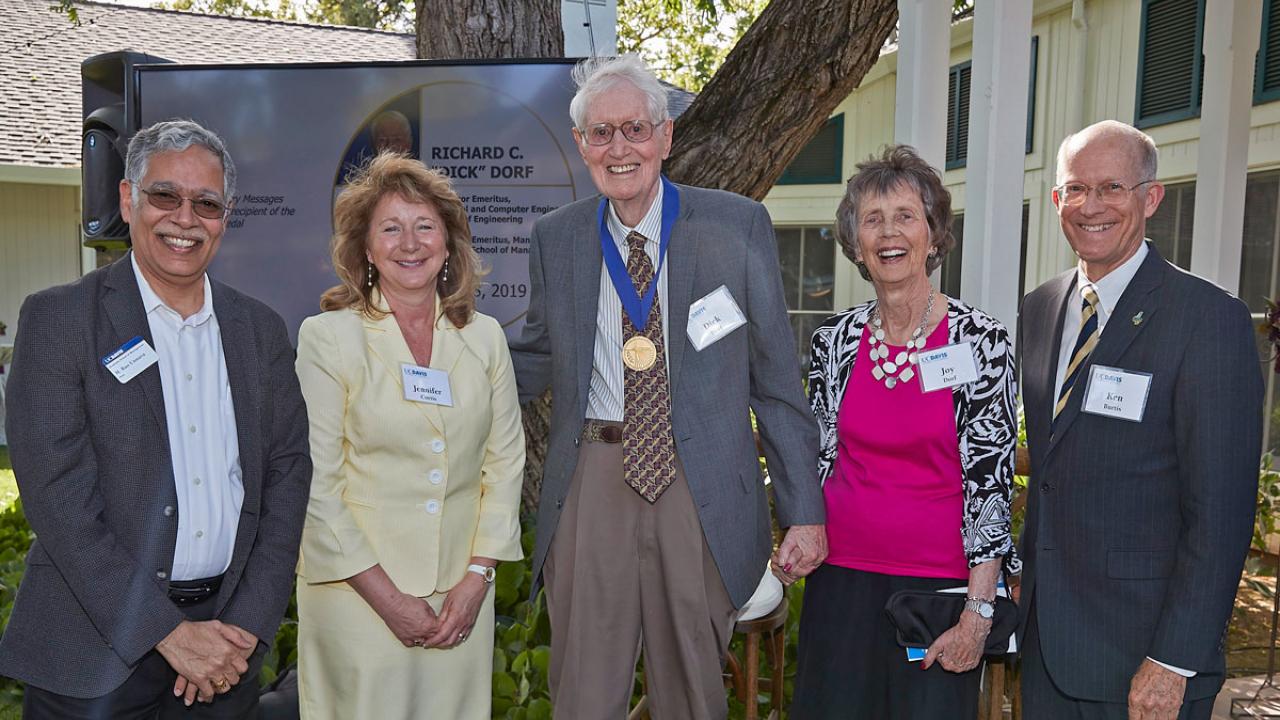 Professor Emeritus Richard C. “Dick” Dorf, a recipient of the UC Davis Medal last year in recognition of his contributions to the university and the fields of engineering, entrepreneurship and technology management, died Oct. 22 at the age of 86.

A faculty member of the Department of Electrical and Computer Engineering since 1971, he had expertise in control systems, robotics and energy systems. His other passions led him to play a pivotal role in the establishment of the Graduate School of Administration, now called the Graduate School of Management, in 1981.

IN HIS OWN WORDS

Dean Rao Unnava, in a tribute posted to the GSM website, called Dorf, a member of the school’s founding faculty, “a leading expert in entrepreneurship and innovation.” Dean Jennifer Sinclair Curtis of the College of Engineering said Dorf’s “lasting contributions to UC Davis are indisputable.”

Andre Knoesen, professor and chair of the Department of Electrical and Computer Engineering, said Dorf “had a profound influence on our department and on engineers throughout the world as a prolific and influential author,” citing Modern Control Systems and Introduction to Electric Circuits, as well as Technology, Humans and Society: Toward a Sustainable World.

Dorf served as a consultant for numerous business ventures and  mentored UC Davis students and alumni who went on to become successful entrepreneurs. He co-founded nine companies: six in technology firms and three involved in publishing.

He had served on the Dean’s Executive Committee of the College of Engineering and the Dean’s Advisory Council of the Graduate School of Management, and also had been a trustee on the UC Davis Foundation Board.

He is survived by his wife, Joy.

Read the complete obituary on the College of Engineering website.

The school named its Veterinary Medical Teaching Hospital after him in 2007, making his name synonymous with the world-class veterinary program that he helped create.

IN HIS OWN WORDS

He began as dean by preparing for major expansions in facilities and the professional curriculum to meet the evolving needs of society. He and other faculty leaders completed a comprehensive self-study document that gave rise to major curricular and policy changes in the 1970s.

Pritchard testified before the U.S. House of Representatives in 1966 regarding the future of veterinary education. His vision and leadership are largely credited with helping to gain federal funding for veterinary schools and teaching hospitals in the United States, and with making UC Davis a model for U.S. and Canadian veterinary schools.

His experience in tropical veterinary medicine, international agriculture development and law led him to serve as an international consultant on several U.S. agriculture research and development programs and for the Rockefeller Foundation. He was a member of President Lyndon Johnson’s Science Advisory Committee Panel on the World Food Supply, chairman of the Scientific and Cultural Exchange Mission to the U.S.S.R. in 1967 and served on President Richard Nixon’s Science Advisory Committee Panel on Biological and Medical Science.

He served two terms as president of the Association of American Veterinary Medical Colleges. His last public effort was as co-director of the Pew National Veterinary Education Program.

He is survived by his wife, Deanna Falge Pritchard; three children, Caryl, Alyn and Cynthia; and 11 grandchildren and three great-grandchildren

Read the complete obituary on the School of Veterinary Medicine website.