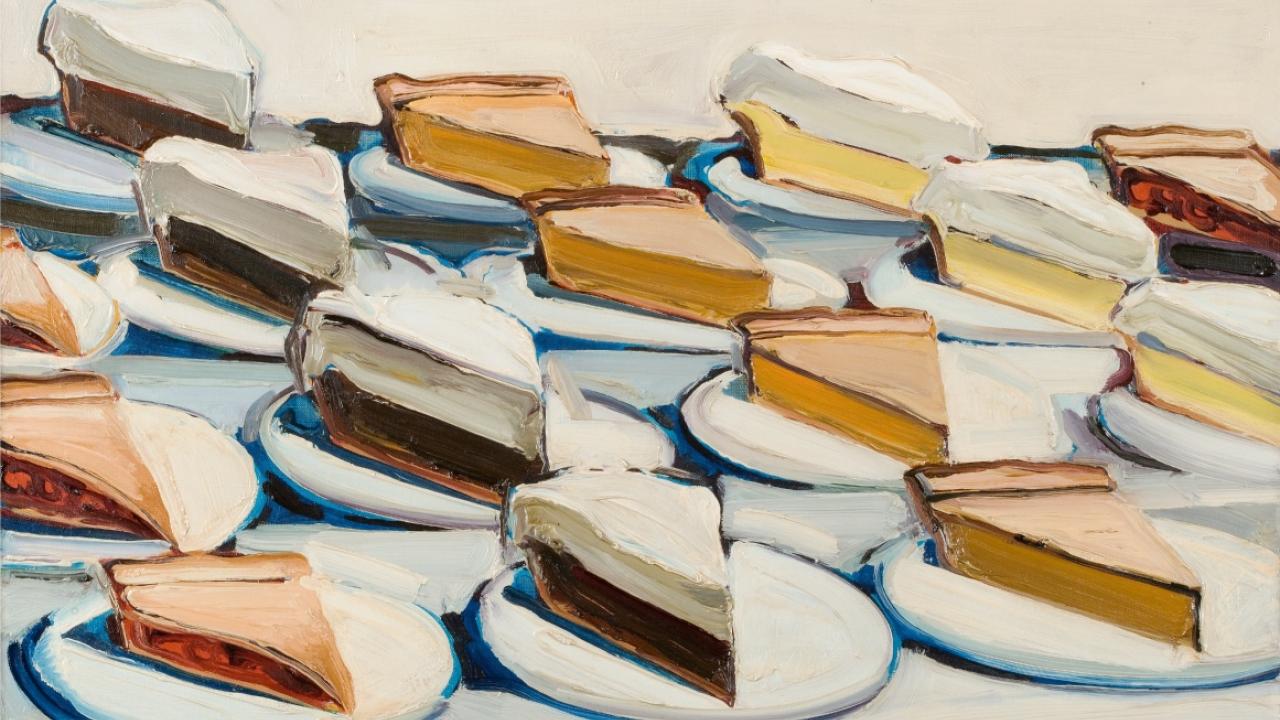 The Jan Shrem and Maria Manetti Shrem Museum of Art at the University of California, Davis, announces the highlight of its 2017-18 season, a major exhibition of early works by Wayne Thiebaud, one of Northern California’s best known and most accomplished artists. Wayne Thiebaud: 1958-1968 presents rarely exhibited works and new scholarship on this formative decade, a pivotal period of Thiebaud’s practice during which the artist worked his way from obscurity to national prominence as he refined his singular artistic sensibility.

The exhibition features more than 60 paintings, including several early works rarely exhibited. Admission is free for all.

Wayne Thiebaud: 1958-1968 opens with the artist’s work in the late 1950s, just as he was beginning to transition from the impressionistic style of his early period toward the representational paintings for which he became widely known. Between 1960 and 1961, Thiebaud entered a new and exceptionally prolific phase of his practice, producing more than 100 paintings that depict everyday objects of American life — ranging from gumball machines to swimsuits and slices of pie — rendered with exaggerated colors reminiscent of commercial advertising. This transition coincided with Thiebaud’s appointment in 1960 to the faculty at UC Davis, which was then in the process of assembling a distinguished art department that also included Roy De Forest, William T. Wiley, Robert Arneson and others. In 1962, the school provided Thiebaud with a grant to travel to New York City, where a massively successful debut exhibition at the Allan Stone Gallery launched his national reputation.

“Wayne Thiebaud was an overnight sensation a decade in the making, and now critical analysis is some 50 years overdue,” said Manetti Shrem Museum Founding Director Rachel Teagle, who curated the exhibition. “He posited new ways in which painting could make meaning, yet his contribution to the history of contemporary art is not fully appreciated in part because the myths of sudden success obscure an understanding of the origins of his art and the context in which it emerged.”

Thiebaud, who officially retired from the UC Davis faculty in 1991 but continued to teach into the next decade, was recently featured in the Manetti Shrem Museum’s inaugural exhibition, Out Our Way, which highlighted the work of artists who helped establish the school’s reputation as a leading institution for artistic instruction. Wayne Thiebaud: 1958-1968 is the first exhibition to focus exclusively on a specific phase of Thiebaud’s practice, offering visitors a rare opportunity to reconsider his early work and its influence on the trajectory of 20th century American painting. In conjunction with the exhibition, University of California Press is publishing a catalog that includes new scholarship on Thiebaud’s life and work, along with press clippings, photographs and other ephemera from this critical period of his career.

“A truly passionate teacher and mentor, Wayne Thiebaud ignited a spirit of creative innovation in countless students and aspiring artists spanning four decades on the UC Davis campus,” said Teagle. “It is in that same spirit of innovation that we launched the Manetti Shrem Museum where Thiebaud’s groundbreaking early work will be the focus of our winter exhibition season.”

Along with the Thiebaud exhibition, the Manetti Shrem Museum will feature Day for Night, a 16 mm silent film by British artist Tacita Dean, featuring single frames of the objects in artist Giorgio Morandi’s studio. By looking at these objects in different light, Dean offers a new read of the work of Morandi, a painter Wayne Thiebaud has described as “an artist’s artist.” Morandi was a major influence on Thiebaud during this early phase of his career as a painter. Tacita Dean: Day for Night is on exhibit Jan. 16 – May 13, 2018.

All programs are free and open to the public unless noted otherwise.

Lecture: “The Here and There of Painting — Space and Light as Material.” Stephen Westfall, associate professor in painting, Rutgers, the State University of New Jersey.

Lecture: “Understanding Thiebaud — Views of the Painter and His Work.” Rachel Teagle, Manetti Shrem Museum founding director and curator, and Margaretta Lovell, professor of American Art and Architecture, University of California, Berkeley, discuss a pivotal moment in the evolution of Thiebaud’s work.

Lecture: “How I Learned to Paint.” Roger White, artist and author. Using both historical and personal examples, the author of The Contemporaries: Travels in the 21st Century Art World discusses the idiosyncrasies of studio-art education; in particular how ideas and values are transmitted in a nonsystematic, essentially narrative way that complements or contradicts the more organized pedagogies of art history and theory.

The Jan Shrem and Maria Manetti Shrem Museum of Art at the University of California, Davis, opened its doors in November 2016 with a commitment to making art accessible and approachable to all. Offering engaging experiences that reflect and serve the UC Davis community, the museum shares the university’s core values of innovative research, interdisciplinary experimentation, and a dedication to educational programming, and builds upon its legacy of exceptional teaching and practice of the arts.

One-third of the museum’s 50,000-square-foot space is dedicated to educational programming, including a 125-seat lecture hall, classroom space, and the Carol and Gerry Parker Art Studio and Art Yard, which exemplifies the flow between indoor and outdoor space that is a central characteristic of the structure’s distinctive architecture.