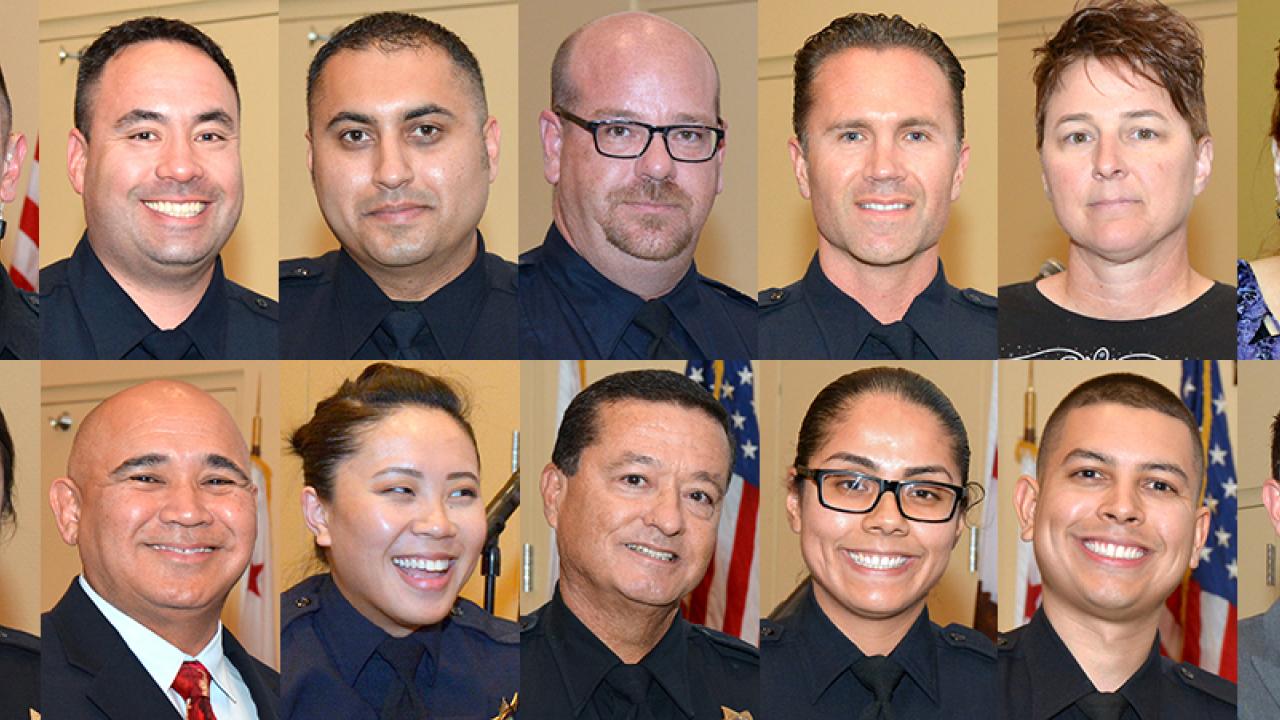 Police Chief Joe Farrow recently presented UC Lifesaving Medals to 14 officers and dispatchers, honored another dispatcher — just a year into the job — as Dispatcher of the Year, and presented Lifetime Achievement Awards to two longtime officers who are retiring.

Police Chief Farrow outlines how his department is striving to be part of the mental health solution at UC Davis. Read his open letter.

The department held its awards ceremony May 24. “May is Mental Health Awareness Month,” the chief said, noting his department’s response to nearly 1,000 crisis situations in 2017.

“As evidence of the challenges faced by law enforcement everywhere, I stand here to recognize 14 who provided exemplary services (since April 2017),” the chief said. “Tonight, it is my honor and privilege to recognize 12 officers and two dispatchers for lifesaving efforts over the last year here at UC Davis,” specifically in four incidents on the Davis and Sacramento campuses.

The medal recipients (pictured above):

“Innumerable faculty, staff, students and their families’ lives were positively impacted, because, in some cases, you risked your own lives to save those of others,” the chief said. “You all demonstrated model teamwork and sincere compassion while handling these life-or-death situations. We are very proud of you all.”

Nominations for UC Lifesaving Medals go through the Council of Chiefs, comprising all the police chiefs in the UC system and the coordinator of police services.

Chief Farrow presented lifetime achievement awards to Capt. Jennifer Garcia and Sgt. Barry Swartwood, both of whom are retiring.

Garcia started her career with the UC Davis Police Department as a dispatcher in 1994, attended police academy and quickly moved up the ranks, even serving as interim chief for a year prior to Farrow’s arrival in August. “Jennifer is the reason we have many of our training and outreach units, and why we are well respected and valued in our community,” the chief said.

Swartwood has been with the Police Department since 1985, serving as detective sergeant, patrol sergeant and today as training sergeant. He’s been a member of the department's firearms team since 1990 and has served as the department’s range master for more than 20 years. He was named the department's Police Officer of the Year in 2005 and received the UC Medal of Valor in 2006.

Dispatcher of the Year

Chief Farrow honored Amelia Vaughan as the department’s 2017 Dispatcher of the Year, recognizing her dedication and the quality of service she provides to the community and department.

“Dispatchers are the voice of our first responders and are the usually the first point of contact for someone in crisis,” said Capt. Garcia, former dispatcher. “It’s one of the toughest jobs in public safety.”