There’s a lot more “home” in Homecoming Weekend this year! Homecoming focuses on football, of course, but we’ve also got four other homey events: an Arboretum Plant Sale and a Bicycle Auction, Parent and Family Day, and Neighbors Night Out!

Not to mention the new Homecoming Pep Rally, which is being held in lieu of Pajamarino. Come one, come all to the campus’s A Street Field, from 4 to 5 p.m. Friday (Oct. 11), to put some more pep in your Aggie step! Gunrock wouldn't miss it — get a pic with him in a photo booth. The new UC Davis Marching Band, and the Cheer and Dance teams will perform; and the rally also will feature a games area, and free pizza and ice cream (while supplies last).

Of course, it wouldn’t be a pep rally without pep talks — so Chancellor Gary S. May and head football coach Dan Hawkins will be on hand to happily spread the Homecoming spirit.

The pep rally is sponsored by Intercollegiate Athletics, the Student Alumni Association and the Cal Aggie Alumni Association, whose associate executive director, Pauline Metzgar, explained: “We wanted a new, fun and festive way to bring UC Davis and downtown Davis together for Homecoming.”

Indeed, as soon as the rally ends, people are encouraged to go across the street, into downtown Davis, for Discover Davis, a Chamber of Commerce event featuring more than 40 businesses, student housing information, swag and prizes, plus pumpkin decorating.

It’s also where you can see the Cheer and Dance teams put on their second performance of the day, and the Mascot Dance-Off in which Gunrock will defend his title (6 p.m. on the G Street Center Stage). Go Gunrock!

Homecoming Saturday (Oct. 12) starts early with the UC Davis Bicycle Auction, one of two the university holds each academic year, open to the public — a great opportunity for new students to get a bike (if they came to school without one), or replace the one that got stolen over the summer.

The event begins with viewing at 7:30 a.m. The auction starts at 9 and continues until about 1 p.m. Acceptable payment: cash, checks, Visa and Mastercard. See auction tips from the pros here.

PLAN YOUR OWN SUPER BLOOM 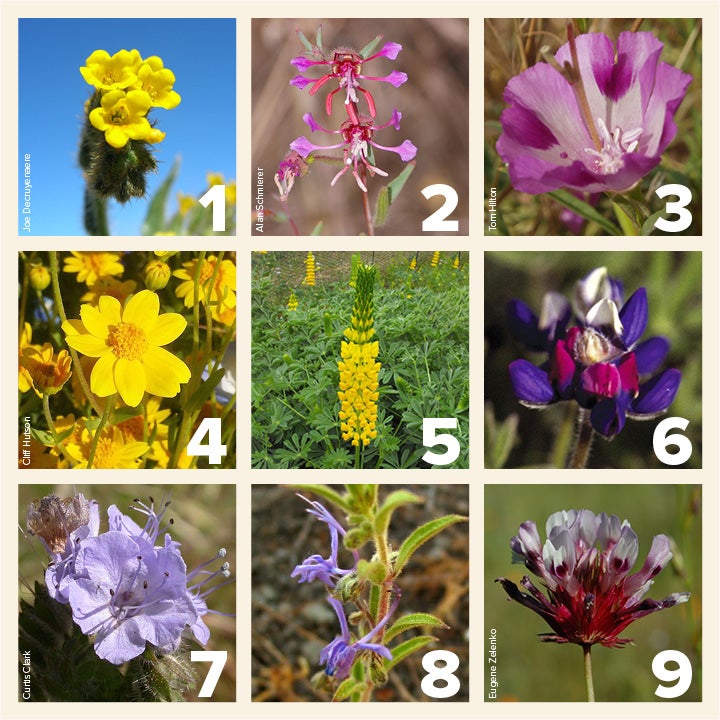 All fall plant sales will feature a selection of wildflower seeds for sale. Learn more.

The second plant sale of the fall season runs from 9 a.m. to 1 p.m. Saturday (Oct. 12) at the Arboretum Teaching Nursery, on Garrod Drive across from the Veterinary Medical Teaching Hospital.

Everyone is welcome to shop the one-acre nursery for an incredible selection of Arboretum All-Stars, California natives and thousands of other attractive, low-water plants perfect for creating a landscape alive with environmentally important pollinators.

Note: With a football game taking place Saturday afternoon, campus authorities will close a portion of La Rue Road — between Hutchison Drive and Garrod Drive in front of the stadium — at noon. So you may need to take a detour to get to the plant sale after that time:

If you’re using the south entry off Interstate 80, proceed as usual: La Rue Road to Garrod. Leaving the plant sale after noon? Follow the above directions, in reverse.

This event, Saturday (Oct. 12), featuring lectures and a Student Success Panel, and bike and library tours, is organized by the Aggie Parent and Family Association, but attendance is not limited to parents and family. Alumni interested in rediscovering UC Davis also are invited. The program, including breakfast and lunch, will finish in time for you to attend the Homecoming football game. More information and registration link.

The Homecoming game features the Aggies vs. the Mustangs of Cal Poly San Luis Obispo in a Big Sky Conference match-up, with kickoff set for 4 p.m. Saturday (Oct. 12) at UC Davis Health Stadium.

The newly reconstituted marching band will be there, playing in the stands and presenting a field performance at halftime. And two of our four-legged Aggies: Maverick, who made his debut at the Sept. 28 game, ridden by “Maggie the Aggie”; and Pint the tee-retrieving dog, taking a break from his (owner’s) sabbatical.

This will be the 45th meeting between UC Davis and Cal Poly (the Aggies have won the last two and lead the series, 22-20-2) and the 16th annual Battle for the Golden Horseshoe (the Aggies have a one-game edge, 8-7).

Tickets are available as follows:

Before the game, the marching band will perform among tailgate festivities. Among them: the School of Law’s Taco Tailgate at the south end of the stadium, between Lot 56 and the Schaal Aquatic Center (look for the white tent with the School of Law banner). The law school has free tickets for first 50 people to arrive.

Other athletics contests around Homecoming Weekend:

Read more about our Champion Aggies and fall sports.

Now in its 14th year, Davis Neighbors Night Out provides an opportunity for neighbors — including UC Davis students — to get acquainted and to open lines of communication to last through the academic year. In fact, Davis holds its Neighbors Night Out later in the year than other communities, waiting until students are back in town, so students and their neighbors can start the year on a positive note.

Neighbors Night Out will be from noon to 7 p.m. Sunday (Oct. 13). The organizers invite neighbors, neighborhood associations, Neighborhood Watch liaisons, apartment complexes and/or homeowner associations to be party sponsors, to take the lead in setting up activities such as potluck dinners, barbecues, dessert parties or ice cream socials where neighbors can introduce themselves and exchange phone numbers for Neighborhood Watch lists and future events.

One of Unitrans’ vintage double-deckers will be making the rounds, attending several parties, and Chancellor May and LeShelle May will be dropping by at least one party.

The Davis Neighbors Night Out website includes tips for party sponsors, and a signup link.