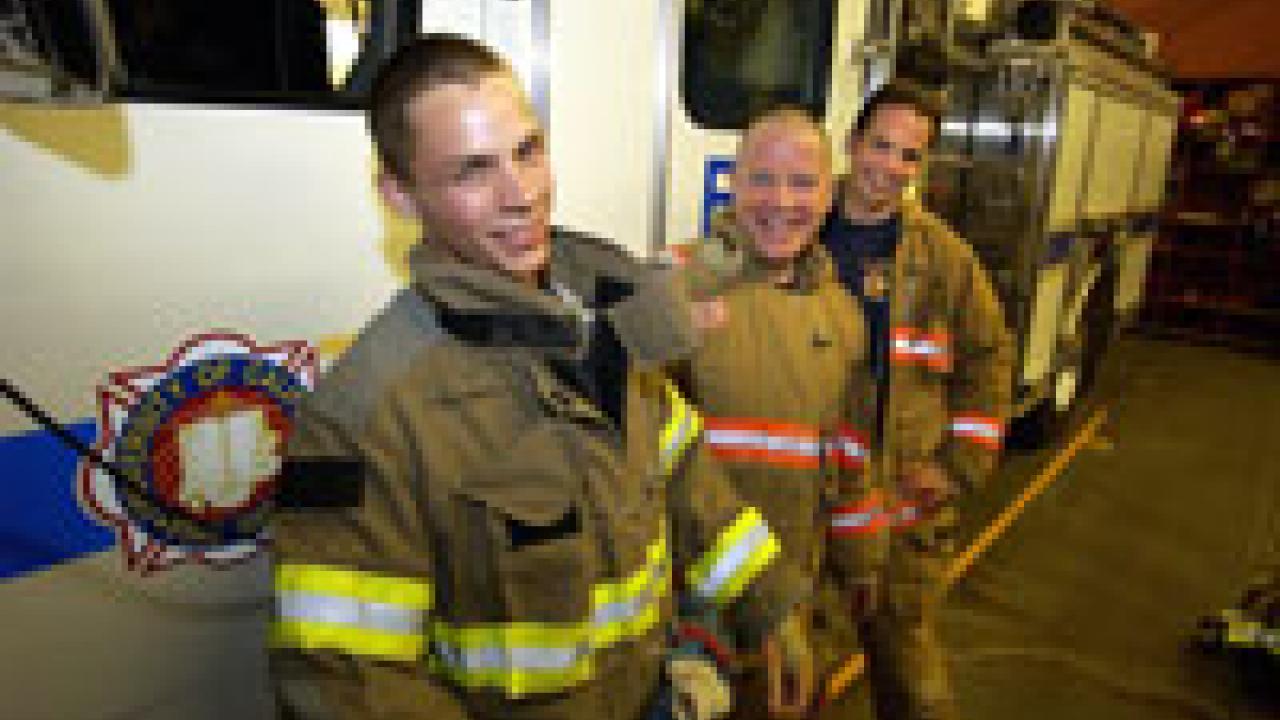 When there is an emergency in Yolo County and a fire truck races to the rescue, UC Davis students often are among the ones who save the day. They are the lucky few individuals who have a chance to make an impact in their community as members of the UC Davis Student Resident Firefighter program.

The program started in 1955 and is one of only five in the country. A select group of students get the opportunity to live in a fire station and learn the trade from professional firefighters.

Tonight, A-shift is on duty. It is about 8 p.m. and a bunch of people -- including the captain of A-shift, Bill Peterson -- are milling about downstairs in the kitchen cleaning up after dinner. Some firefighters are watching TV in the lounge or doing homework at the kitchen table. The mood is carefree; but in a short while, at a moment's notice, this laid-back lot will be out the door in full gear ready to protect the public.

Career firefighters make their temporary homes downstairs and students firefighters live upstairs in quarters resembling a typical dorm room -- clothes strewn on the floor and a bed and desk crammed into the remaining space. An unused room has been converted into a game area with a Playstation 2. And yes, there is a fire pole.

Ten to 15 student firefighters live in the building at any given time. Students are divided into three shifts (A, B and C) and work with 21 career firefighters, who also work one of three shifts.

Each shift of students has a senior student resident firefighter -- a veteran of the program. For A-shift, that's Kieran Malone, a graduating senior majoring in microbiology. He has spent three years in the program and hopes to get a job as a career firefighter next year.

A battle just to get in

Every two years the residential firefighter program recruits new students. No experience is required, but students do have to deal with the mental and physical stresses that come with firefighting. So each recruit is required to participate in a Human Performance Lab evaluation, in which subjects run for as long as they possibly can while their heart rates and rhythms are monitored.

This year the department received applications from 200 students to fill about 10 spots. Fifty applicants were interviewed, and 23 will get to take part in summer academy this September. During the three-week academy, students will learn how to use protective equipment, handle a hose and ladder and how to deal with hazardous materials. About half the class will be invited to become residential firefighters.

The program attracts students of all backgrounds -- communications, sociology, engineering majors and more. Most want to become professional firefighters. But even those who don't, say they benefit from learning about teamwork, dedication and responsibility.

Students are forced to deal with all of the traumatic events that face a paid firefighter on a daily basis. It can be a difficult task, Malone said. "I've given CPR to people that don't make it. It's something you have to deal with," he said. "That's the reality of it. The career staff is very supportive though."

Student firefighters work 20-25 hours weekly on top of a full class load. Malone can attest answering calls in the middle of the night doesn't help the studying much either. "There have been times when I've worked on a fire for four hours one night and then had a final the next day," he said.

Nevertheless, students still manage to fold other extracurricular activities into their schedules. Asha Stoddard, the C-shift senior resident, plays club volleyball. Phil Roliz of A-shift is paying his way through school; so he is working another job at Families First. He also emcees Aggie events.

Having so many things to do actually helps him get his school work done, Roliz said, noting, "it's motivation to stay at home and study."

When the call arrives

Studying is what Roliz is doing at the station at about 10 p.m. when red lights start flashing in the hallways. The crew gathers around the dispatch speaker. Someone has reported seeing flames in a campus parking lot. Moments earlier people had been lounging around good-naturedly arguing over that afternoon's pickup basketball game. But now there is an air of anxious excitement. It's clear: this is what these people live for.

Roliz and three career firefighters get ready to roll. They work intently, silently and drive out of the station in a matter of seconds. Any conversation is purely business. The time for fooling around is over.

They arrive at the parking lot only to discover that the "fire" turns out to be a couple of small flames poking out of a parking permit dispenser. A career firefighter boldly strides up to it, inhales, and takes care of the blaze with a short puff. End of fire.

Of course, all calls are not this easy. Malone recalls breaking down metal doors at the MU and fighting out-of-control grassfires as well. It is difficult to tell when a call will turn out to be a false alarm or an all-night event, he said.

The conversation turns light-hearted again. Roliz asks the career firefighter if he made a wish before blowing. In the truck on the way back the firefighters discuss "NYPD Blue" and shopping strategies over the intercom. There is a palpable collective sigh of relief as soon as the job is done.

Experience students get daily is exactly what they need to find work after college. Roliz has a job opportunity next year in Contra Costa County, and Malone and fellow A-shifter Michael Pountney are waiting to hear back from fire departments across the state. Even the chief of the UC Davis Fire Department, Mike Chandler, is an alumnus of the program, as is career firefighter Hartinger.

A fire service job is more than just a meal ticket though; the students see it as a responsibility. It is their duty to protect the public. This is what makes the job so important and enjoyable to students and careers alike, Malone said.

"Cutting a hole in a roof with a chainsaw is a lot of fun, but it's more than that," he said. "You realize that what you do is important to people. It's a service to the community. You're trying to make a positive impact."