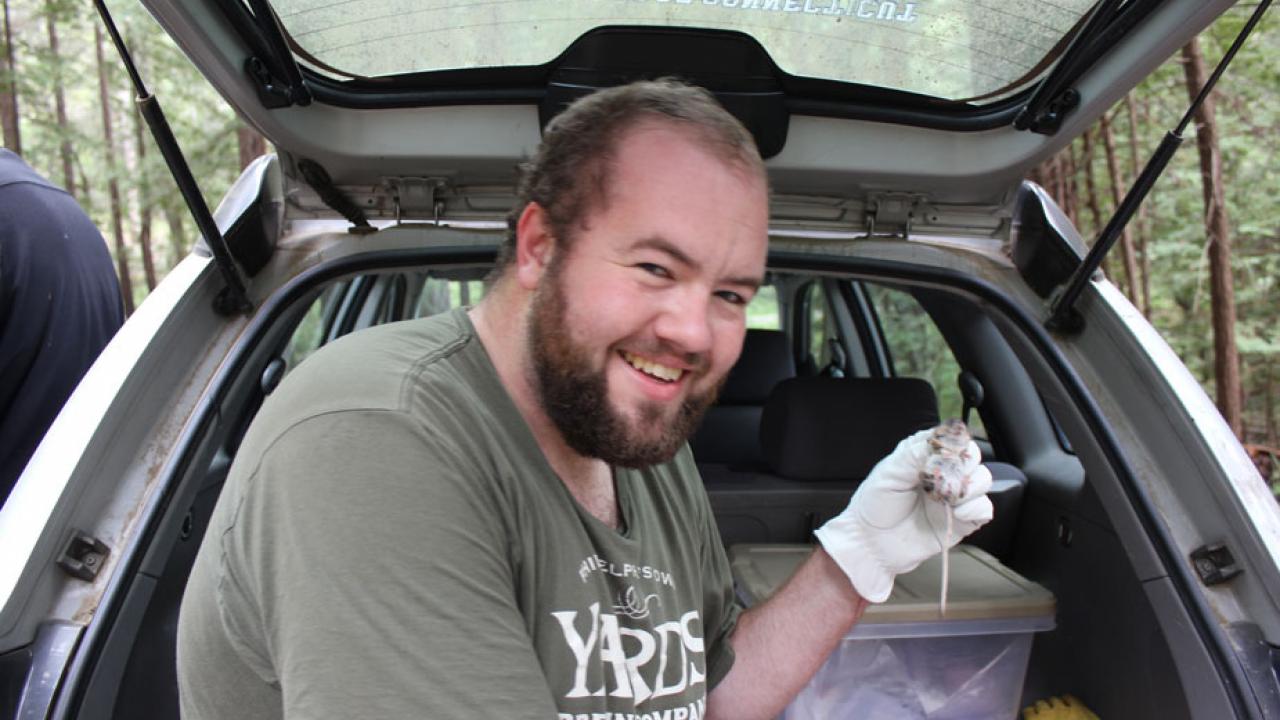 The Winters Fire that researcher Ben Plourde had to contend with last week had been 90 percent contained as of 6:55 a.m. today (July 11). The fire had charred 2,269 acres southwest of Winters, according to a Cal Fire update.

The fire broke out around 12:45 p.m. Thursday (July 6) in the vicinity of Highway 128 and Pleasant View Road. The cause was still under investigation.

Cal Fire reported today that all evacuation orders and road closures had been lifted. More than 400 firefighters were still at work, mopping up hot spots and strengthening control lines.

The UC Davis Fire Department responded the first day of the fire with a truck and a three-person crew. The truck has since been assigned to the Garza Fire in Kings County; the fire had burned more than 14,000 acres of grassland and was 17 percent contained as of this morning.

For the fifth time in five years, wildfire had broken out in the vicinity of the reserve in the Coast Ranges west of Davis. This time, dozens of furry research subjects were potential victims.

Benjamin Plourde, a Ph.D. candidate in integrative pathobiology in the School of Veterinary Medicine, had gone out to the reserve Thursday afternoon (July 6) to set traps to capture small mammals, as he has done many times over the past four years. His advisor, Professor Janet Foley, has since 1997 been studying the reserve’s rodent populations and diseases they carry.

“As I was driving back to Davis after setting the traps, I saw the smoke from the grassfire,” Ben said.

Animal trapping in toasty California must be done overnight, so that direct sun does not overheat the temporary captives in their boxlike cages. Mammologists are accustomed to getting up before dawn to check traps and free their animals.

But when Ben went back early Friday to measure and release his rodents, he could not get through — authorities had set up roadblocks on Highway 128, because of the Winters Fire that broke out early Thursday afternoon.

“First I tried getting to Cold Canyon from Winters,” he said, “and then I drove all the way around through Napa County to try to get to the reserve from the west, but no luck.”

He knew that any deer mice, wood rats and California voles that had been captured in his traps, enjoying the seeds he had used to lure them, would survive only a few hours as the sun climbed higher.

At that point, Ben sent the email that set the rescue operation in motion.

He sent it to his advisor, who immediately forwarded it to Natural Reserve System staff, including me. I was initially stumped, because reserve staff have no special way to gain access to an area closed to the public. But I quickly thought of regional partners who are already accustomed to rescuing other, human, subjects from Stebbins Cold Canyon.

Volunteers from the Vacaville Fire Protection District are frequently called to rescue hikers who are lost or incapacitated while attempting the popular — but very strenuous — loop hike that crosses the reserve.

A couple of weekends ago, volunteers from the department were out in the scorching heat handing out water and safe hiking advice to hikers, so I knew how engaged they were with the area.

1 staff member reaches out to another

I called Michael Payne, a fire district volunteer who has been closely involved with safety efforts at Cold Canyon. In his day job, Michael is the dairy outreach coordinator for the UC Davis Western Institute for Food Safety and Security, so he immediately understood the stakes for the long-term research that was threatened by the fire.

“Let me make some calls,” he said after hearing the story.

A quick half-hour later, Michael had connected with Assistant Chief Doug Rogers, who headed out immediately to meet up with Ben. With the active fire more than a mile away (and north of Highway 128, whereas Stebbins Cold Canyon is south of the highway), authorities waved the pair through the roadblock — the researcher and his safety escort.

They drove to the reserve, where Ben ran in to free the captive animals —saving about 20 deer mice and voles from imminent death.

Professor Foley was thankful. “We’ve studied the wood rats, ticks and tick-borne disease at this site for two decades,” she said. “The 2015 Wragg Fire killed almost every wood rat in the study population and destroyed much of their habitat, underscoring how crucial Ben’s work is to understanding how high-intensity wildfire affects ticks and disease risk in this uniquely Californian ecosystem.”

As Friday ended, I was happy to have played a small part in protecting a research program and saving some of our underappreciated, pocket-sized wildlife.

Firefighter Michael took the latest rescues in stride, but he was ‘pretty sure this was the first mouse rescue in the history of the Fire Department."

Located about 35 minutes west of Davis near Lake Berryessa’s Monticello Dam, Stebbins Cold Canyon is one of five units in the UC Davis Natural Reserve System, which is administered through the university's John Muir Institute of the Environment.

UC Davis’s reserves are part of the UC Natural Reserve System, which protects 39 sites in habitats across the state for teaching and research. Stebbins Cold Canyon is one of a very few of the reserves that allow public access for hiking.

But, please, think twice before hiking at Cold Canyon any time the temperature is above 90 degrees. People get into trouble because the 1,300-foot climb is intense, and there is little shade as a result of the 2015 fire. Also, because of the wet winter, there is far more dry vegetation than usual at the reserve — which means wildfire would spread incredibly quickly in the dry landscape, especially during the warmer times of day.

The reserve has already been closed several days this year due to state-declared red flag warnings. People thinking of hiking in the summer months should check websites for the reserve, Cal Fire and the National Weather Service before heading out.