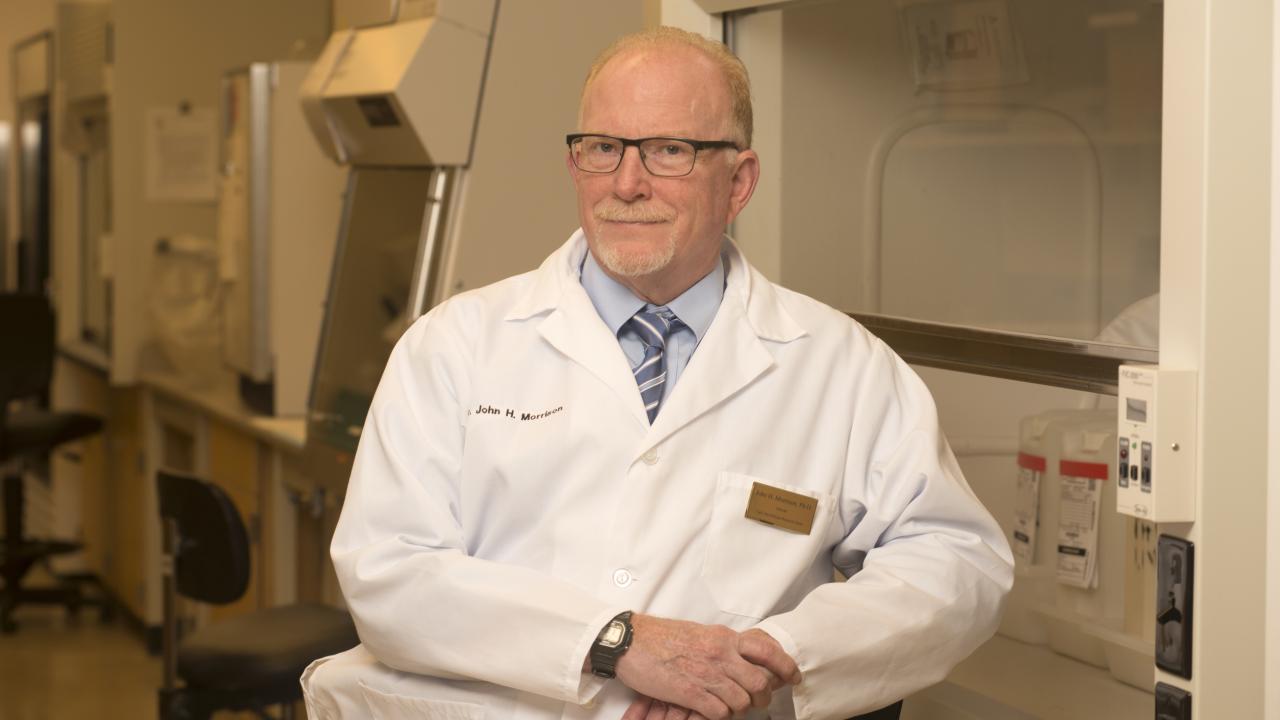 John Morrison, professor of neurology at the University of California, Davis, and director of the California National Primate Research Center, has been elected to the National Academy of Medicine, one of the world’s most prestigious scientific bodies.

“John has long been a leader in his field and I could not be happier to learn that he has received this much-deserved recognition and honor. His work is a prime example of both the groundbreaking research UC Davis does in exploring human health, and of how we engage in society through public outreach. His election to the National Academy bears this out,” said Ralph J. Hexter, interim chancellor of UC Davis.

Morrison, whose research has focused on aging and Alzheimer’s disease, has a strong interest in educating the general public about brain science, and the importance of animal models in research. He is editor-in-chief of Brainfacts.org, a website developed by the Society for Neuroscience that aims to educate the public about brain research and how basic research is linked to improving healthcare. He enjoys giving public lectures on brain science, as well as advocating with lawmakers and giving congressional testimony on behalf of the society.

“I’m really looking forward to working with colleagues in the National Academy, to take part in outreach on basic science and how it improves health,” Morrison said. “The American public is very supportive of science, and the more we can tell them, the more supportive they are.”

Unless they’ve taken an advanced degree in the subject, most people have little education about brain science, Morrison noted.

“People really want to know about this, and they’re always grateful to learn,” he said. For example, Morrison often gives talks on the differences between normal cognitive decline in aging and Alzheimer’s disease.

Neuroscience wasn’t even a defined field when Morrison was in high school. He attended Johns Hopkins University, which didn’t have a neuroscience major at the time, so Morrison made up his own by taking every course he could related to brain science. Later, he studied with Floyd Bloom at the Salk Institute, one of the pioneers of neuroscience as a field in itself, and in recent years collaborated with another early pioneer in neuroscience, Bruce McEwen, contributing important discoveries about the effect of stress on the brain.

Morrison began working on Alzheimer’s disease in the 1980s, working with patients and later with mouse models. A few years later, he turned to study cognitive decline in natural aging, particularly the role of estrogen in changing brain function over time.

Over his career, Morrison has worked with human patients and animal models including both rodents and nonhuman primates, such as rhesus macaques. With their relatively complex brains and behavior similar to our own, nonhuman primates such as the rhesus macaque, are better models for studying cognition than rodents. Because monkeys living at the California National Primate Research Center can live much longer than in the wild, researchers are able to study the effects of aging in an animal that is physiologically similar to us.

At UC Davis, Morrison aims to combine his work on aging with studies of models of Alzheimer’s disease.

Many people experience some cognitive decline, including memory deficits and problems with executive function, as they age, but this is quite distinct from Alzheimer’s disease, Morrison said. In aging, the synapses — connections between nerve cells — become less effective, and less “plastic,” meaning less able to learn and grow. But in Alzheimer’s disease, those nerve cells are destroyed completely. It’s the difference between a device with some faulty circuits, and one with great chunks of wiring torn out and thrown away.

Monkeys and apes can show the same kind of cognitive decline with aging as humans, Morrison said. Alzheimer’s disease, however, is unique to humans. Morrison hopes to establish a model for Alzheimer’s in nonhuman primates that will allow us to understand the very early stages of the disease.

Morrison joined UC Davis in October 2015. He was previously dean of Basic Sciences and the Graduate School of Biomedical Sciences as well as professor of neuroscience at the Icahn School of Medicine at Mount Sinai, in New York.

“John’s election to the National Academy of Medicine is an incredible and well-deserved achievement that reflects his career accomplishments in the field of neuroscience,” said Julie Freischlag, vice chancellor for human health sciences and dean of the UC Davis School of Medicine. “Though he has been with UC Davis for only a year, John already has made an indelible imprint here through his innovative brain research. I am so pleased he is being honored with this tremendous recognition.”

About the National Academy of Medicine

The academy, established in 1970 under the name Institute of Medicine, is an independent organization of eminent professionals from diverse fields including health and medicine; the natural, social, and behavioral science; and beyond. It serves alongside the National Academy of Sciences and the National Academy of Engineering as adviser to the nation and the international community. Through its domestic and global initiatives, the NAM works to address critical issues in health, medicine, and related policy and inspire positive action across sectors.

The academy elects no more than 70 regular members and 10 international members annually. Membership in the National Academy of Medicine reflects the height of professional achievement and commitment to service. Morrison is the 14th current or retired member of the UC Davis faculty to be elected to the academy.

The California National Primate Research Center at UC Davis is one of seven primate research centers supported by the National Institutes of Health. Collectively, the national primate research centers are a unique resource for investigators studying human health and disease, offering the opportunity to study potential cures, treatments, and preventive measures in nonhuman primate models that most closely resemble human responses. Research performed at the CNPRC provides necessary information before proceeding to clinical trials in humans, and has led to new drugs and therapies that benefit human health and quality of life.