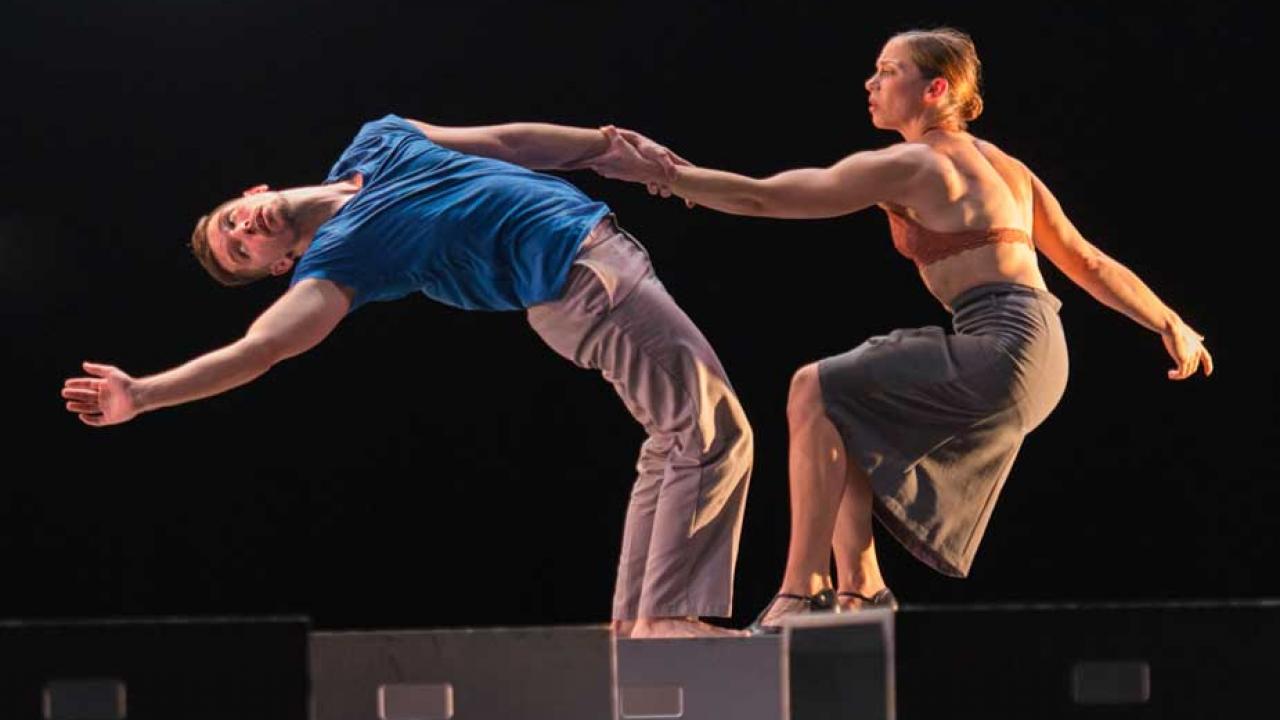 Boy Howdy to Perform in Corin Courtyard at the Mondavi Center

Get L.O.S.T. in dance with the March Well-Being Ticket Deal: $10 tickets to see Diavolo at 3 p.m. Sunday, March 26, in Jackson Hall at the Mondavi Center for the Performing Arts. The discounted tickets are for staff and faculty, and you have only a 10-day window to make your purchases, March 1-10 (limit two tickets per person).

The Staff and Faculty Health and Well-Being Program and the Mondavi Center are offering $10 ticket deals like this on a monthly basis.

The Diavolo show is among more than a dozen on the Mondavi Center’s Presenting Program in March. The schedule includes three free Corin Courtyard Concerts in advance of ticketed events in Jackson Hall.

The Los Angeles-based Diavolo uses dance to explore the relationship between the human body and its architectural environment, in visceral and awe-inspiring works that reveal how we are affected emotionally, physically and socially by the spaces we inhabit.

Diavolo: Architecture in Motion comes to the Mondavi Center with a new work, L.O.S.T. (Losing One’s Self Temporarily), celebrating the troupe’s 25th anniversary. L.O.S.T. is in two parts: Passengers, in which the dancers move fearlessly around a giant, morphing train; and Cubicle, wherein the performers further demonstrate their athleticism and grace, this time in navigating a set of huge, weighty cubes.

March at the Mondavi includes more dance, along with music and a slam poetry champion, plus those free concerts: March 17 (St. Patrick’s Day) and 21:

Brian Jagde, tenor, with special guest Joyce El-Khoury, soprano — They’ll explore romantic arias and duets from the operatic repertoire and more, including Mozart, Verdi, Massenet, Bizet, Puccini and Bernstein. 8 p.m. Saturday, March 11. Co-presented by the Department of Music; concert will be in the Recital Hall of the Ann E. Pitzer Center.

Shane Koyczan — Winner of the U.S. Slam Poetry Championship and the Canadian Spoken Word Olympics, Koyczan is best experienced up close and personal, with his rhythmic verse in high gear, piloting his audience through social and political territory with a furious honesty and a tender humanity. 8 p.m. Thursday-Saturday, March 16-18., Vanderhoef Studio Theatre.

The Real Nashville: The Del McCoury Band & Béla Fleck and Abigail Washburn — Dive into Americana music with bluegrass royalty Del McCoury and the most awarded band in bluegrass music (multiple Grammys and nine Entertainer of the Year awards); and Béla Fleck, long known for his adventurous expansion of the banjo, joined by Abigail Washburn, vocals and banjo, for an equally creative exploration of American sounds. 8 p.m. Tuesday, March 21, Jackson Hall.