The biggest winners include “Art in Action: Building a Climate Art Trail,” in which K-12 students help create colorful murals in rural California landscapes to share information about climate change; “Formula Racing,” in which UC Davis students build an electric race car from scratch; and a research project studying whether fidgeting can reduce attention-deficit/hyperactivity disorder, or ADHD, in children. Another big success: replenishing the Staff Emergency Funds at UC Davis and UC Davis Health, a source of cash grants for employees with unforeseen financial hardships. All these projects exceeded their goals.

“We are thrilled!” said Jullianne Ballou, project leader for Art in Action and associate director of strategic initiatives with the Institute for the Environment. “Beyond our gratitude for the financial support, it’s encouraging to have a new network of people who believe in the value of the project.”

Ballou’s “Art in Action” team raised more than $3,000, exceeding its original goal of $2,500. The project, Ballou said, feeds a desire for more public art and taps into widespread concern about the environment. “Many people understand the challenges that young people are going to inherit and want to both leave the world better for them and give them tools allowing them to be resilient, effective stewards of the Earth,” she said. 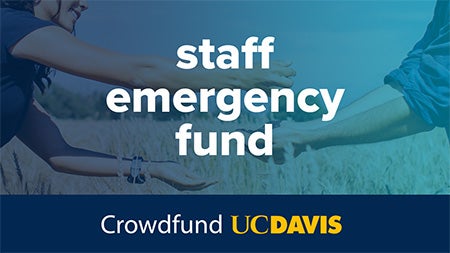 “We are delighted and touched by our UC Davis and UC Davis Health colleagues and leaders who contributed,” said Joanne Touhey, project manager for the staff emergency funds and a project lead in UC Davis Human Resources. “I know firsthand how grateful our employees are to receive a cash grant when facing unforeseen personal hardships.”

Both Touhey and Ballou attributed their projects’ success to their teams’ energy and dedication in getting the word out. Emails, Ballou said, were the most effective tool for her team,  “perhaps because we used them to say more about our project’s impact.”

Crowdfund UC Davis takes place in October and February each year, and since its debut in February 2020 has raised more than $534,100 for 126 teams.

The Annual and Special Gifts Program in Development and Alumni Relations works with Advancement Services to review applications and provides the Crowdfund UC Davis platform, training, guidance and some publicity — but it’s up to project teams to fuel the marketing and networking that lead to fundraising success.

The application period for the February 2023 cohort is open now through Nov. 30.

The Arboretum and Public Garden, Bodega Marine Laboratory, Institute of the Environment and UC Davis Student Foundation will participate in this new effort. These groups have been sending Giving Tuesday email solicitations through the Annual and Special Gifts Program for years. Using the Crowdfund UC Davis platform will allow them to engage their teams and audiences more actively in their fundraising efforts.

“They’re excited to see how their fundraising goes using crowdfunding tools and strategies for Giving Tuesday — and so are we,” said Michelle Poesy, managing executive director of the Annual and Special Gifts Program. “If it’s successful, we’ll see about adding more teams next year.”

The Giving Tuesday campaign will appear on the Crowdfund UC Davis website.

Joan Fischer, senior writer for the Annual and Special Gifts Program in Development and Alumni Relations, can be reached by email or at 530-754-0482.