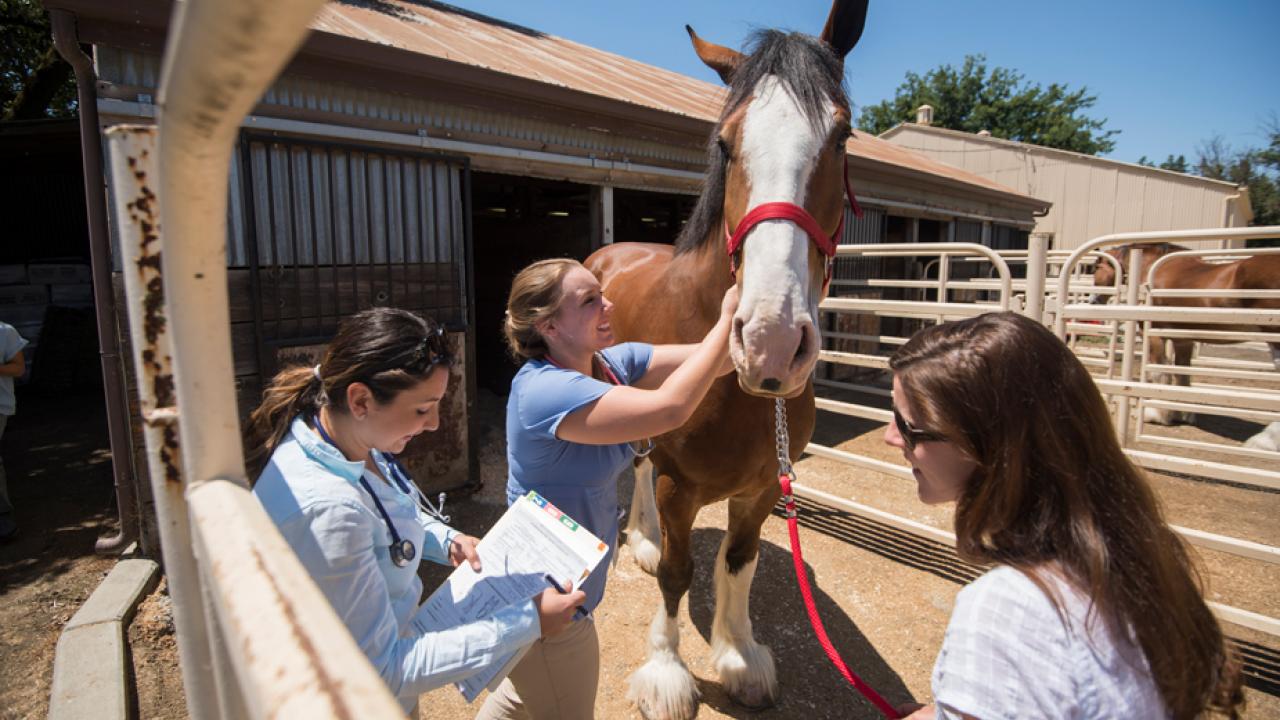 The ‘Clydes’ Are Here to Make Some Deliveries

Some of our favorite guests are here again: 10 Budweiser Clydesdales (and two Dalmatians), staying the week at our Horse Barn. They’re not parade-bound, as is often the case when they stop here. Instead, the team of horses will pull the Budweiser wagon to make beer deliveries to bars and restaurants — in Davis, and to the UC Davis Pavilion, and elsewhere.

The team will then make its way to The Pavilion at the Activities and Recreation Center, arriving about 6 p.m. and staying until 7:30, during the intermission of the Aggie basketball doubleheader (the women play at 5:30 p.m. and the men play at 7:30 p.m.).

At each stop, the Budweiser crew working in conjunction with Sacramento-area distributor Markstein Beverage Co. will deliver a case of Budweiser in celebration of the end of Prohibition 84 years ago this week. Budweiser introduced its Clydesdale team and beer wagon that same year as the states considered the 21st Amendment to the Constitution to repeal Prohibition. With 48 states at the time, ratification required the approval of 36 of them, and it was Utah that put the repeal effort over the finish line on Dec. 5, 1933.

Budweiser is celebrating Repeal Day coast to coast, with wagon and Clydesdale teams making appearances in New York, Dallas and the Sacramento area.

The team staying at UC Davis made its first run Monday night (Dec. 4), delivering beer in historic downtown Folsom — and drawing a crowd of several thousand people. Here's the rest of the Sacramento-area schedule:

The public also has the opportunity to see the Clydesdales at the Horse Barn, 8 a.m. to 5 p.m. through Friday — that is, when they’re not out delivering beer. Map and directions.

Kelli Davis, Horse Barn manager, reported that the “Clydes” arrived Nov. 29 and, since then, UC Davis veterinarians examined the animals and a Budweiser farrier gave the horses new shoes.

“Mornings are usually the best chance to see the horses out of their stalls being exercised on our hot walker, although it is not a set schedule,” Davis said.

Read more about the Budweiser Clydesdales.