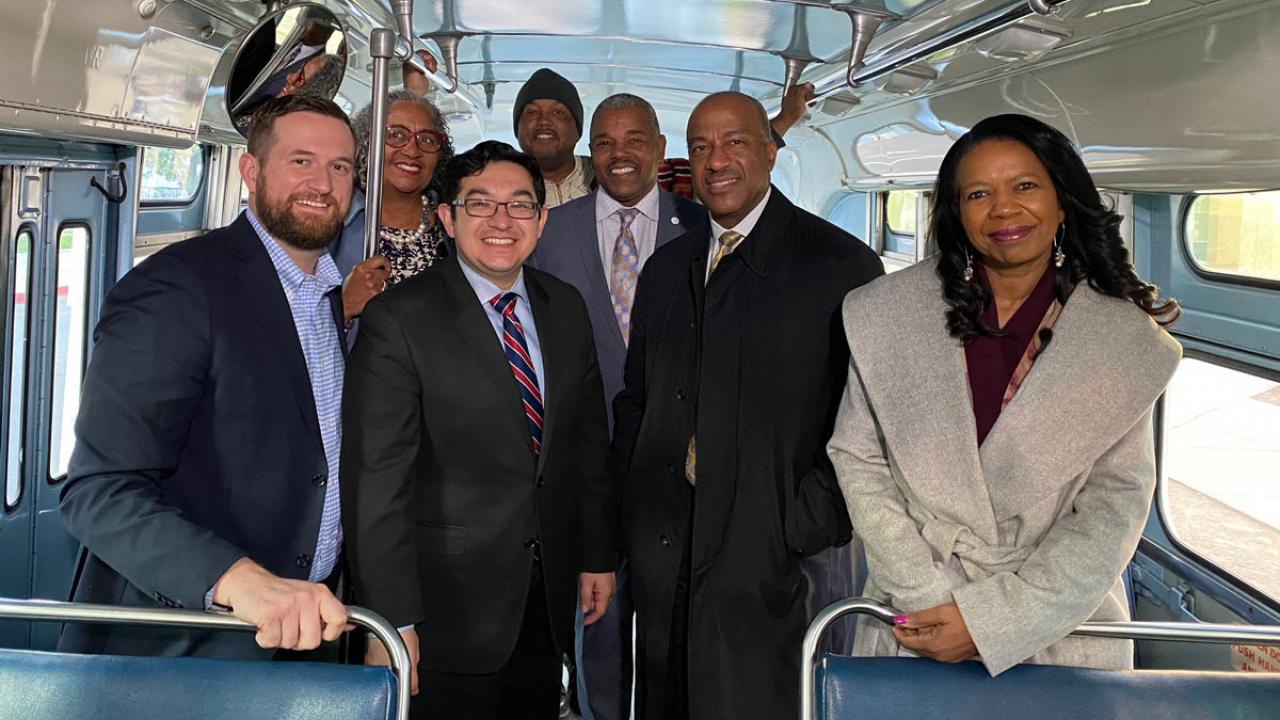 Chancellor Gary S. May hopped on a 1950s-era Sacramento city bus and took a seat with Rosa Parks, in spirit, Tuesday (Feb. 4), the 107th anniversary of her birth.

In 1955, on a bus in Montgomery, Alabama, Parks famously refused to give up her seat to a white passenger, sparking a yearlong bus boycott by the African American community — the first major action of the civil rights movement.

Tuesday, Chancellor May stepped aboard “Old Blue,” a 1958 bus that Sacramento Regional Transit keeps for occasions just such as this: Rosa Parks Day in California. This year marked the state’s 21st annual observance of Rosa Parks Day, first celebrated in 2000, five years before her death.

SacRT had parked the bus at Ninth and I streets, across from Sacramento City Hall, in collaboration with a community group. Members of the group stood by through the afternoon, sharing information with the public about Parks and her legacy. The community group amended the day’s title to Rosa Parks Day of Courage.

After visiting the bus, Chancellor May attended the City Council meeting, where he led the Pledge of Allegiance and spoke in support of a council resolution recognizing Parks “for embodying the love of humanity and freedom and dedicating her life to the cause of human rights.”

“On behalf of UC Davis, I want to express our deepest support of this resolution ... appropriately delivered during Black History Month.” the chancellor said. “We think of Rosa Parks as a guiding light, and her impact still shines with us today.

“With a single act, Rosa Parks changed the course of this country. She made it clear that one person can make a profound difference. Her bravery and unyielding dedication to social justice inspire us even today.”

The chancellor continued: “We have to keep these values of social equity and diversity as core goals of our mission at UC Davis. ... Our campus is also guided by Principles of Community that set standards of respect, civility and inclusion. Like Rosa Parks, we believe everyone should be able to thrive in a climate of equity and justice.

“I appreciate that the city of Sacramento shares the same values as UC Davis. Our campus might span both sides of the causeway, but it’s encouraging to know how much common ground we share.”